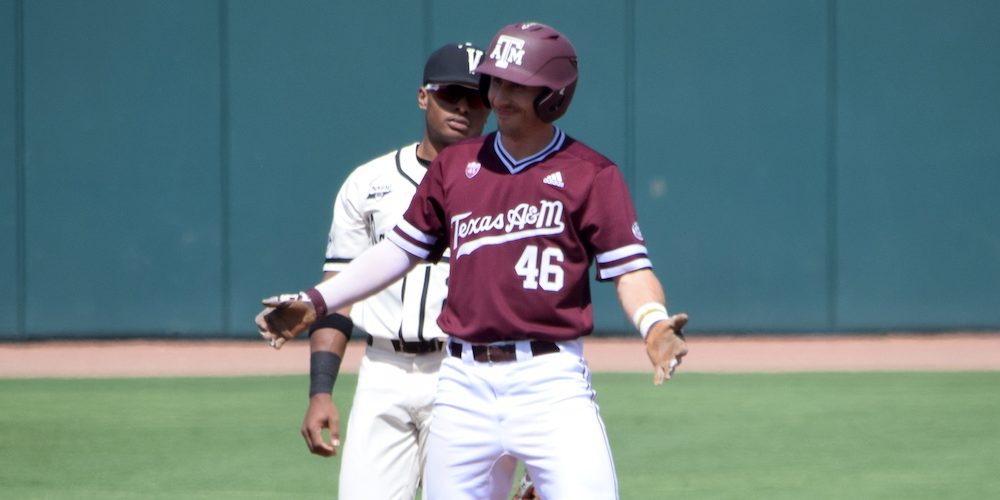 Jonathan Ducoff knew what was coming, and he braced himself.

The Texas A&M Aggies’ 23-year-old graduate transfer had just chopped a walk-off single that somehow found a crevice between third base and shortstop, beating second-ranked Vanderbilt 8-7 on March 16.

“Ground ball through the six hole,” Ducoff said. “It was by no means beautiful, but it got the job done.”

His deed done, Ducoff slowed down between first and second base and endured an avalanche of teammates who had rushed to celebrate with their triumphant teammate.

Ducoff’s joy at that moment was made all the more gratifying by what he has endured the past 15-plus months, an ordeal that began just before Christmas 2017, when he “felt a tug” while lifting weights. He knew he needed hernia surgery, and he wanted it done immediately so he wouldn’t miss any games in the fast-approaching 2018 season.

“My first emotion was that I was pissed,” Ducoff said. “I was in panic mode. I had come off a good fall. I was focused on getting drafted (in 2018), and this was a setback.”

After talking to his father, Ducoff decided to go to a 24-hour clinic to get CT scans to confirm the size and severity of his hernia. The hope was to expedite the process, giving the surgeon who was going to repair the hernia all the images needed.

With the baseball season just a few weeks away, time was ticking. When the first clinic Ducoff went to declined to do all the scans he asked for, he went to another urgent-care provider.

That’s when the first alarm bells went off.

“I’m really thankful for the radiologist reading the report not just blindly looking for a hernia,” Ducoff said. “They started asking me if I had been feeling sick. They said there were some weird things in the images, and it could be a lot of things … or it could be nothing.

“I blew it off. Other than the hernia, I felt like a million bucks. I didn’t even tell my parents until the next morning, in passing.”

Ducoff’s parents, Scott and Laura, contacted their family doctor, who performed the hernia surgery, which took three hours longer than expected due to a mass of enlarged lymph nodes.

On January 5, 2018 – two days after the surgery – Ducoff was diagnosed with cancer, specifically, follicular lymphoma.

The call went to Scott, who had made that arrangement with the surgeon.

Laura Ducoff said the news came as a total shock.

“It was extremely emotional,” Laura said. “We all just fell apart.”

Devastated, the family called Taylor, who is Ducoff’s 27-year-old brother and best friend. 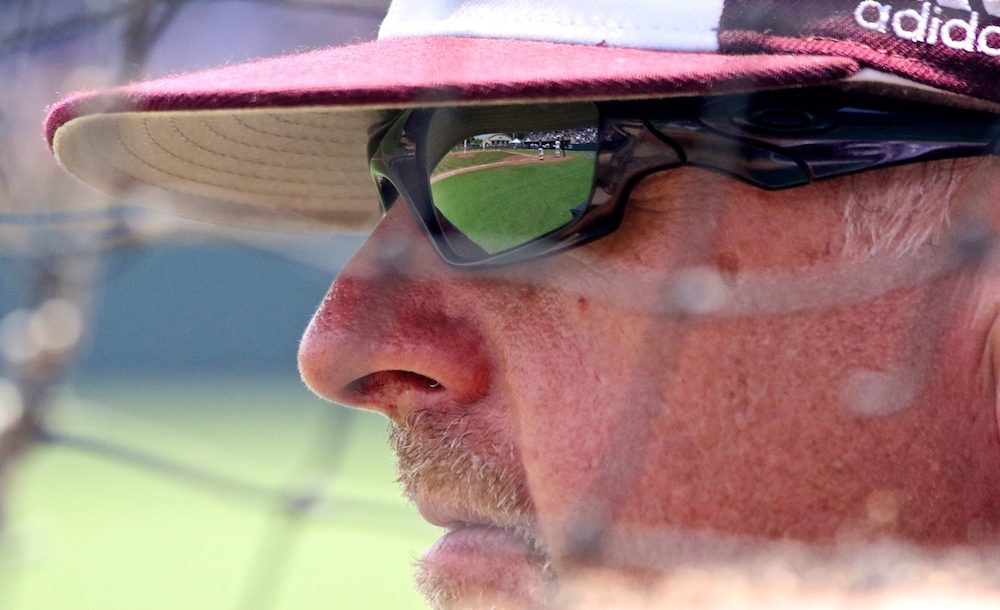 Taylor, a former pitcher at McNeese State and Houston Baptist, lives 10 minutes away from his parent’s home. He immediately dashed to the scene but not before calling the family pastor, who just so happens to be Craig Reynolds, a Houston native who enjoyed a 15-year major-league career and was a two-time All-Star shortstop.

“I called Craig, and we prayed,” Taylor said. “When I got to the house, I tried to calm everything down. But with Jonathan always being so healthy, it was definitely shocking and scary.”

For the next two days, Ducoff didn’t do much besides lay in bed. He was dealing with a double whammy – the physical pain from hernia surgery and the emotional anguish of a cancer diagnosis.

“All of a sudden, I felt this overwhelming peace,” Ducoff said.

Ducoff had purposely avoided reading the fatality rates regarding his disease. He read, instead, his Bible, flipping through it randomly until he came upon Jeremiah 29:11:

“For I know the plans I have for you,” declares the Lord, “plans to prosper you and not to harm you, plans to give you hope and a future.”

Fowler discussed treatment options, and Ducoff made it clear that he wanted to play baseball in 2018. And when Fowler “didn’t shy away” from that goal, Ducoff knew he had his doctor.

The treatment option selected was a combination of drugs still in clinical trial: Rituximab, which essentially teaches the body to kill cancerous cells, and Revlamid, which is an oral chemotherapy pill.

It was his desire to get back on the field that truly drove Ducoff.

Ducoff, who is from the Houston area, was a two-sport star at Kingwood Park High. He was a quarterback and cornerback in football and a shortstop who hit .429/.492/.762 as a senior, earning second-team All-America honors by Perfect Game.

Taylor, although four years older, realized pretty quickly that his little brother was going to exceed his baseball talents.

“He is relentless,” Taylor said. “He’s not a loud, rah-rah guy. But he’s steady, and he’s going to outwork everybody.”

Baylor’s coaches saw those qualities and signed Ducoff, who started 35 games for the Bears as a freshman, batting .252 with one homer and 12 RBIs.

But Baylor had a new coach in 2016, Steve Rodriguez, and Ducoff played just 17 games that year as a sophomore, starting five and batting .074. After that season, he transferred to Houston Baptist.

After sitting out the 2017 season as per NCAA transfer rules, Ducoff was gearing up for 2018 when he felt his hernia.

“Who knows what would’ve happened had it not been for the hernia and had it not been Christmas, right before baseball season, making us want those images,” Scott Ducoff said. “I believe it was divine intervention.”

Perhaps the biggest miracle of all happened on Feb. 15, 2018. That’s when Ducoff ran out to center field with the rest of the Houston Baptist opening-day starters.

Ducoff went 0-for-6 that weekend against Baylor – his old school – but then he got three hits against Texas Southern and ended up batting .271 with nine homers in 55 games for the season, including 53 starts.

And he did all that while battling cancer.

In fact, while fighting for his own survival, Ducoff set up a team fundraiser with the money going to two organizations that help kids with cancer: the Pediatric Brain Tumor Foundation and MD Anderson Childhood Oncology.

Ducoff also earned his Bachelor’s degree in Finance that year, and that’s about the time he figured his baseball career was over.

He applied to Texas A&M’s prestigious Master’s program in Accounting, and he was accepted.

Doctors told him on April 30, 2018 that his cancer was in remission, and he and his fiancée, Ryanne Gipson, set their wedding plans for Jan. 1, 2020, shortly after both of them earn their master’s degree. (Gipson is studying occupational therapy at Texas Women’s University.)

But even with all the good things happening — and doctors expect Ducoff will have a long and healthy life — he couldn’t forget one of his first loves: baseball.

Since he was going to Texas A&M regardless, Ducoff contacted Aggies coach Rob Childress and asked for a tryout.

Childress had seen Ducoff play in high school and college and was happy to give him an opportunity, figuring that his 116 games of college experience could only help the Aggies.

“He put himself in the photograph by performing at a high level this past fall,” Childress said. “He can play multiple positions, and we liked his maturity.”

Ducoff not only made the roster as a walk-on, he also started the opener at third base and has been a Swiss Army knife for the seventh-ranked Aggies (27-11-1). Ducoff has been an Opening Day starter at three different colleges: Baylor in 2015, Houston Baptist in 2018 and Texas A&M this year.

Entering this weekend, he has started seven games in right field, six at third base, four in center field, four in left field and one at DH. He has also played some innings at first base and is hitting .247 in 25 games, including 22 starts.

Ducoff, though, cannot be measured by statistics alone. Besides the walk-off single against Vanderbilt, he also nearly hit for the cycle in a 9-6 win over arch-rival Texas on April 2. He went 3-for-5 with a single, double, homer and two RBIs.

In addition, Ducoff recently earned the Lohman Inspiration award, given to the Texas A&M student-athlete who demonstrates integrity and perseverance in overcoming challenges in pursuit of their education.

“He has an incredibly strong faith and an infectious personality. If you think you are having a bad day because you hung a slider that went 400 feet or you struck out three times, just think about what Jonathan has gone through.

“That will put things in perspective for you.”