UCLA assistant coach Rex Peters is dealing with his worst nightmare with his 16-year-old son battling an extremely rare disease. But for guys like him, baseball serves as therapy.

UCLA’s Peters Coaching For Love Of A Son

LOS ANGELES — Coaching college baseball at UCLA has never been so important to Bruins hitting coach Rex Peters, now in his fourth season with the program.

Peters is about as unassuming as they come. He’s not overly vocal, he’s California cool and laid back, but he’s a terrific coach who’s helped the Bruins win a national title, with a chance to add a second to his resume this season. But infinitely more important than anything on the baseball diamond, the word “courage” couldn’t be a better way to describe this coach turned super-dad over the past few months.

As each day passes and the Bruins get closer to playing for a potential berth in the College World Series, most people did not know what was constantly cascading through Peters’ head. But spot Peters at the ballpark and you’ll see a subtle “JP” written in black ink on the corner of his hat. Rex Peters isn’t just coaching for the UCLA Bruins. He’s courageously coaching through the toughest ordeal of his life, and those initials remind him of his 16-year-old son Jake Peters, and are a therapeutic but constant reminder about an extremely trying day in mid-December of last year.

This is Jake’s story.

For all intents and purposes, Monday, Dec. 15, 2014, was looking to be like any other day for Jake Peters, and dad Rex. The Christmas holiday was nearing, excitement was in the air, and there was a general sense of cheer around the Peters household.

The mood would change as the day progressed. Jake Peters would go to school for the day, then he’d head to baseball practice. As Jake arrived home, Rex was there to greet him, with the Bruins in the offseason and home life being a bit more manageable than usual. Jake, showing absolutely no signs of being sick, went upstairs to change and get prepared for dinner. 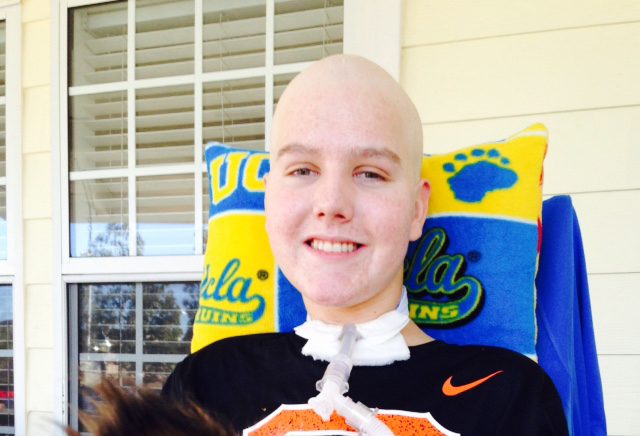 Tingling and numbness escalated throughout Jake’s body. Then, there was troubled, labored, breathing. Something just wasn’t right, and Rex’s fatherly instincts immediately kicked in.

“He was having trouble breathing, so I kind of told him to put his hands over his head and slow things down a bit,” Rex Peters said. “It just wasn’t getting any better. We were really worried. So, we took him to the emergency room, and he started getting unusual tightness in his neck, arms, all over, and just started to get weak. He couldn’t move his arms at that point.

“A few hours later, he went from no signs to all signs,” he continued. “He went from completely normal to being completely flat on his back, unable to move anything. That all progressed within four to six hours.”

[pull_quote_right]”Everyone is different on getting movements back with this disease. The hope is that the swelling will dwindle and his nerves will start reconnecting, thus getting all of his movements back. The doctors think it could take a year or two for him to recover. And even with that, nothing is a guarantee.”[/pull_quote_right]

As a parent myself, I can only imagine the thoughts racing through Rex Peters’ head. Of all things in life, no matter what happens to yourself, you want anything other than your child being sick, in the hospital, unable to move, and with a cloud of uncertainty surrounding the illness. It’s a feeling you wouldn’t wish on your worst enemy, but it was one that Peters quickly had to come to grips with, take a step back, and analyze for what it was.

Doctors initially were dumbfounded as to what was causing a multitude of issues with Jake Peters. Was it cancer? Was it a tumor? Was it meningitis of some sort? Doctors ruled out all of those things, making it a waiting game to figure out the full diagnosis.

It took a few days, but Jake, Rex and the rest of the family finally received a full diagnosis. Test results showed that something was attacking his spinal cord and optic nerve, and a spinal tap ruled out any form of meningitis. MRI results showed lesions on Jake’s spinal cord, and the optic nerve (behind the eye) was very inflamed.

Even several months later, doctors are still only 95 percent sure, but the diagnosis was Nueromyelitis Optica. NMO, as it is called by the medical profession, is defined as: “a rare relapsing autoimmune disorder that preferentially causes inflammation in the optic nerve and spinal cord. The disorder is most prevalent in children as young as 3 years old, and adults as old as 90 years old.”

The severity of the attacks from NMO, according to the Transverse Myelitis Association, are worse than Multiple Sclerosis, and 70 percent of patients with the disorder have relapses after their initial symptoms. The disorder is very rare, and there’s currently no cure, which explains why Jake continues to be hospitalized several months later, while he also needs help breathing through a ventilator.

“They treat this thing with a lot of different things,” Rex Peters said. “They do plasma exchanges where they take out the blood, clean it, and put it back in. He went through six days of plasma treatment therapy, which produced limited results. And he’s even undergone five chemotherapy treatments in an attempt to kill the antibodies that are attacking his spine. His process started with steroid treatments to try to reduce swelling in his spine, but that, too, produced few results.”

The prognosis on Jake Peters moving forward is a big hunk of uncertainty. Common sense suggests that with rigorous treatments, the 16-year-old will continue to get better and eventually be well enough to get out of the hospital. However, even recently, chemotherapy helped reduce swelling in some vertebrae, but then inflamed it in other areas, specifically the C 2-6 vertebrae. Jake still has no feeling from the waist down, though he can shrug his shoulders at times, and does have pronation and supination with his left wrist, with very little movement in his right wrist.

“We just have no idea on a time frame right now. He can swallow and his eyesight is 100 percent. But he’s dealing with a disorder where his own body is attacking his own body,” Rex Peters said. “He’s fully aware, but until his spine swelling goes down enough to be able to breathe, he has to stay in the hospital.

“Everyone is different on getting movements back with this disease,” he continued. “The hope is that the swelling will dwindle and his nerves will start reconnecting, thus getting all of his movements back. The doctors think it could take a year or two for him to recover. And even with that, nothing is a guarantee.”

Permanent disabilities in the future or not, perspective is Rex Peters’ best friend.

A lot has changed for the UCLA assistant coach. He’s no longer recruiting for the Bruins, and head coach John Savage was more than willing to take that workload off his hands. Instead of recruiting before or after practice, Peters, most days, spends the time he has taking care of his son down in Orange County. 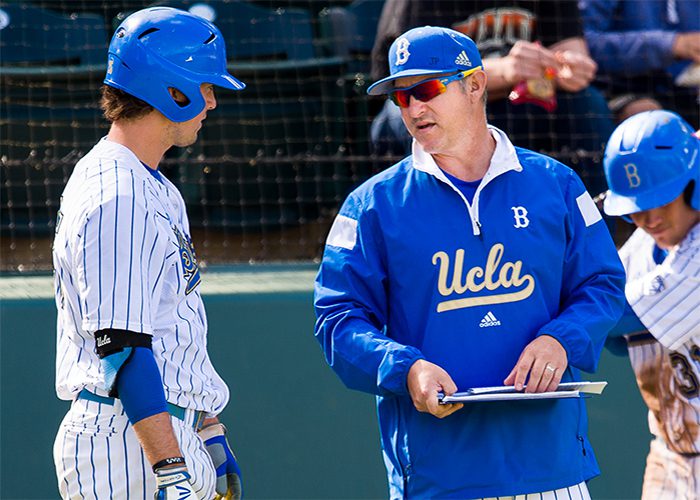 Rex Peters has found a new lease on life after dealing with Jake’s disorder.

Practice or game finishes at a reasonable hour? You’ll see Peters quickly whisk away in his car, head to the hospital, then leave the next day around noon just in time to make the Bruins’ practices or games. Fortunately for everyone involved, Jake has progressed enough to where Rex doesn’t have to spend each night in the hospital, and he can still make all the road trips with the program. But Rex has added a new job responsibility on top of coach and father — caretaker.

“You know, Jake is doing pretty good. But I still try to spend as much time as I possibly can with him. John has been tremendous to our family. He understands my situation and he’s giving me a lot of time to be with my kid,” he said. “With that said, it’s still tough. It’s tough because Jake needs me, he needs the help. And my wife, too, sometimes travels for work. We’ve had to rely on a lot of family members to help us out, but it’s not easy.

“But … sometimes going on the road helps,” he said. “You also get to get some sleep.”

We talk about baseball meaning so much to all of us from a wins and losses standpoint. The Bruins are ranked No. 3 in the latest D1Baseball Top 25, and you know what, that’s fine and dandy. But for Peters, baseball is so much more than that. It’s therapeutic for him, and unlike the situation the Jake, it’s something he has total control of. In the end, it helps bring everything into perspective.

“Everyone thinks these games are important, and they are, but they aren’t life and death. They really aren’t,” he said, pausing for a moment. “The big thing for me is just appreciating the little things in life. The simplest things. I never thought I’d be helping brush my teenager’s teeth, giving him a bath, and things like that. Those are the things we take for granted, and we shouldn’t. You should have an appreciation for everything in life.”

Rex Peters has dealt and continues to deal with a parent’s worst nightmare. But thanks to an ultra-courageous son, and baseball, he’s persevered.