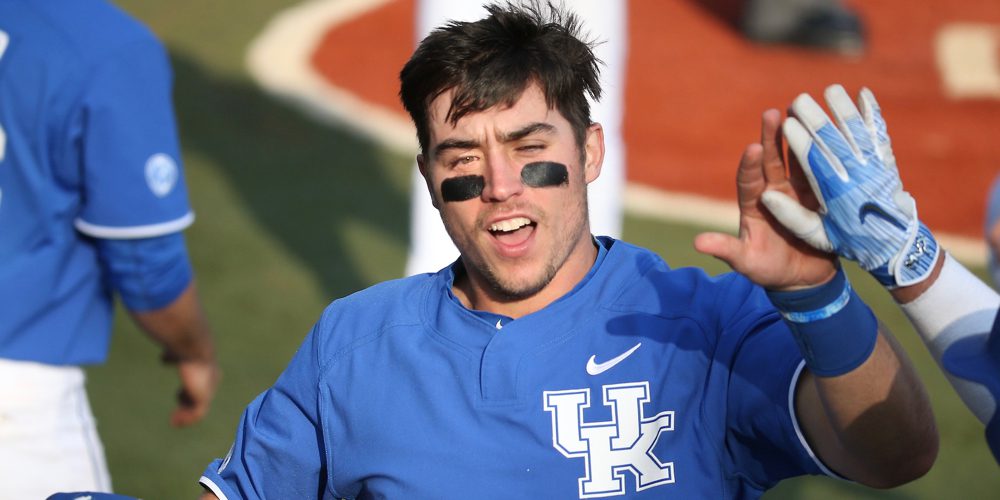 He entered the world about 10 weeks premature and had to have stitches on his hip after his mother, Kori, had Cottam via an emergency Caesarean section.

Cottam’s lungs were not mature, and he needed a blood transfusion. He was in the intensive care unit for 17 days.

“It was a rough birth,” Kori said.

And that was just the start of things to come for Cottam after doctors observed a congenital melanocytic nevus – sometimes known as a mole or birthmark – around his right eye.

Such a nevus can be relatively harmless if it’s in an area of a person’s body that is not regularly exposed to sunlight. But with the location of this nevus, the fear was that it would eventually turn into skin cancer, and Cottam could lose his right eye.

Kori, a doctor who now works at Knoxville’s Parkwest Hospital, knew her son would need surgeries to remove the nevus, piece by piece. She just didn’t know how many surgeries would be required.

“Knowledge is scary but also a blessing,” Kori said. “You know what’s going on, but it still scares the crap out of you. It was the scariest time of my life.”

Cottam had his first surgery when he was just 3 months old. He had eight surgeries by the time he was 2 years old.

Doctors had to slowly remove the nevus piece by piece so that Cottam could have full function of his eyes and his ability to voluntarily open and close them. 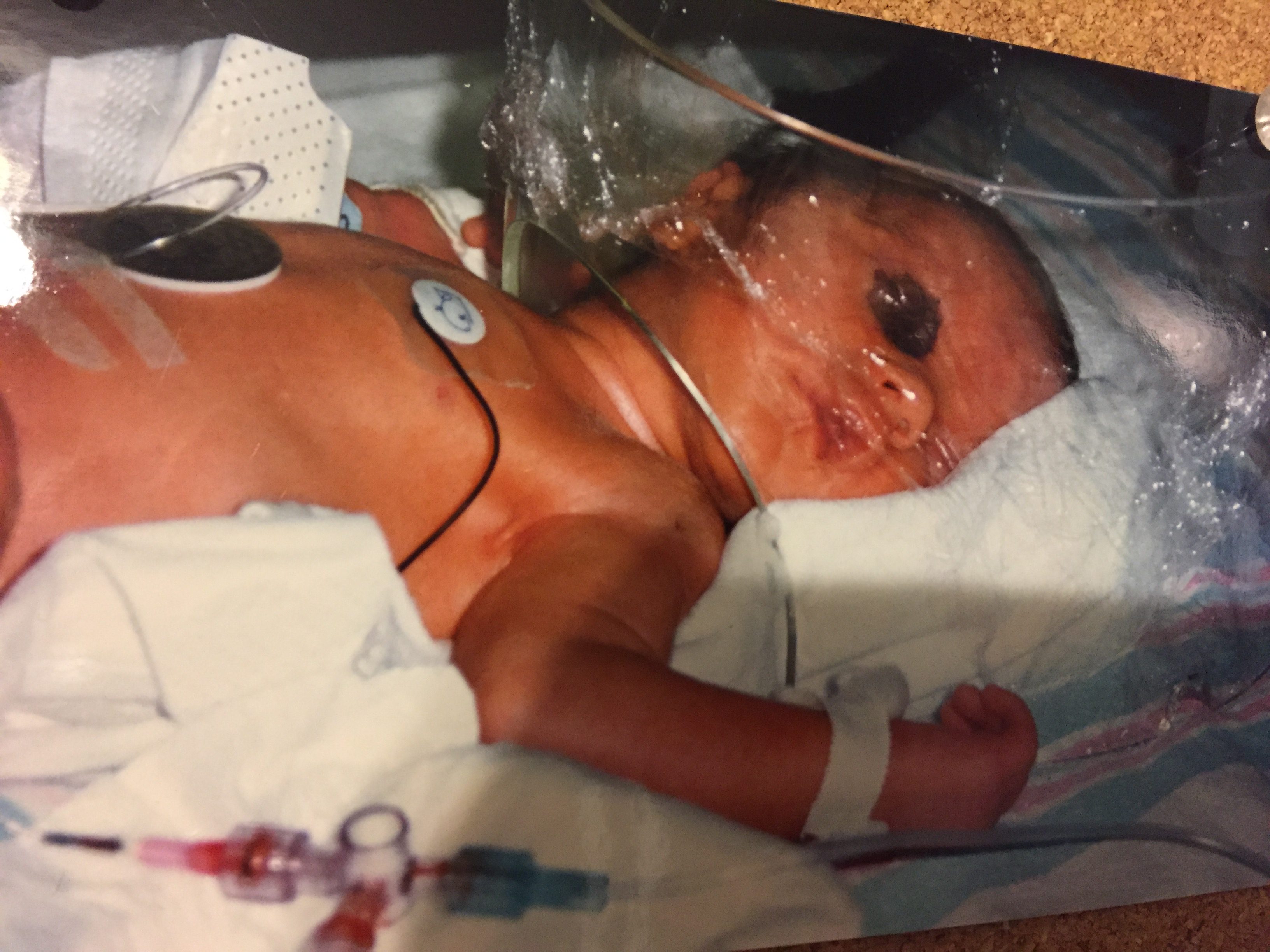 Cottam also had to have skin grafts on his eyelids, where tissue was taken from behind his ears that would most closely match the pigmentation of his face.

The biggest surgery Cottam had came when he was in the eighth grade. Kori had noticed that the area around his eyelid had gotten bigger.

Cottam’s father, Jeff, who is a pilot for Delta, flew with him to Memphis, where doctors performed the surgery.

But before the operation, a biopsy was required. Doctors gave Cottam the choice of coming back when he could be scheduled for general anesthesia or “get it over with right away” with just a local painkiller.

Cottam opted for Door No. 2.

“I’m not sure if he knew exactly what that meant,” Jeff said. “But when the doctor put that needle in his eyelid, I could barely watch.

“I saw one tear come down Kole’s eye, but he never said a word. He just squeezed my hand. That’s just how he is – he’ll never tell you when he’s hurting.”

The biopsy indicated Cottam had a “moderate dysplasia” or abnormality. Doctors needed to remove his entire lower eyelid, graft it and sew his eye shut so it would heal.

A black patch covered his right eye for six weeks, and Cottam had to wash his hair in a sink during that span.

That was the last major surgery for Cottam, who gets checked every other year. He wears contact lenses, but his vision has been unaffected by the surgeries.

“With everything I’ve gone through, it’s affected my family just as much as me,” said Cottam, whose Kentucky team is off to a 7-5 start, including 5-0 at home. “My parents have always been there to talk me through all of that, and it’s probably been tougher on them than on me.

“All I know is that every time I woke up from surgery, my mom and dad were there for me.”

Because doctors have played such an integral role in his life, Cottam, who has a 3.5 grade-point average, is a Kinesiology major and is interested in studying medicine.

Cottam also has a keen sense for marketing.

As soon as Kentucky changed its coaching staff following the 2016 season, Cottam asked if he could wear No. 13, which had previously belonged to catching instructor Keith Vorhoff.

Thirteen, as it turns out, has been pretty lucky for Cottam. Not only was that the number of surgeries he needed to avoid cancer, but it’s also the number on his back this season as he has gotten off to a hot start. He is batting .348/.396/.413 with 11 RBIs in 11 starts. He had a career-high three hits and tied a career high with three RBIs on Saturday against UC Santa Barbara.

Then again, Cottam has a family tradition of athletic success.

His parents met at the University of Memphis, where 5-foot-8 Kori was a senior starter in basketball and 6-foot-1 Jeff was a walk-on baseball player who became a four-year starter at various positions, including catcher. 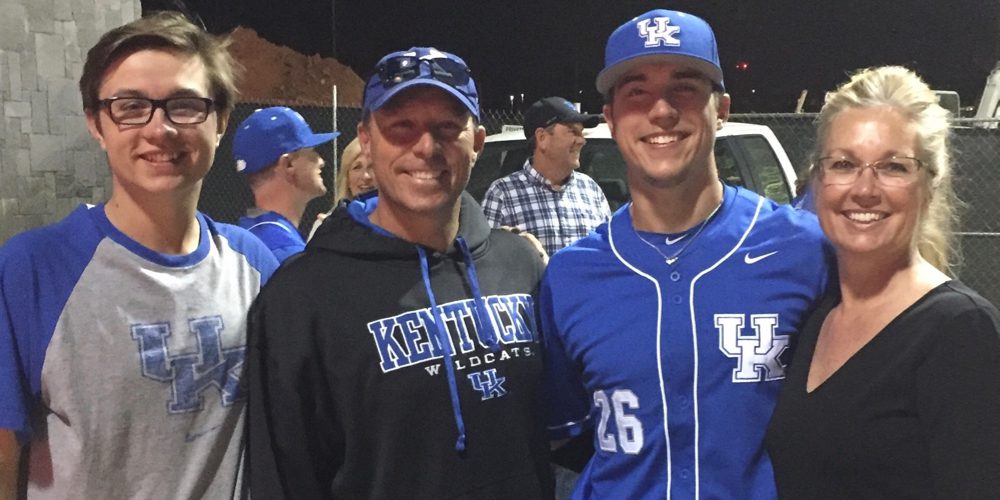 Cottam’s younger brother, Kyle, is a high school golfer who has earned a scholarship to Clemson.

In addition, Jeff was a three-time singles national champion in handball during his college days, and Cottam has tried his, er, hand at his father’s other sport.

“He had never played handball until about five years ago,” Jeff said. “One day, he came out with these guys I played with, and he could have whipped most of those guys.

“Because he’s so big, you think, ‘I can sneak one by him.’ But I was amazed at how agile he was, and how he could use both his hands so well for having never practiced.

“He looks forward to playing handball whenever he’s in town. But I’m kind of happy he chose baseball. There’s not much of a future in handball.”

Cottam’s future in baseball is bright – thanks to 13 lucky surgeries.