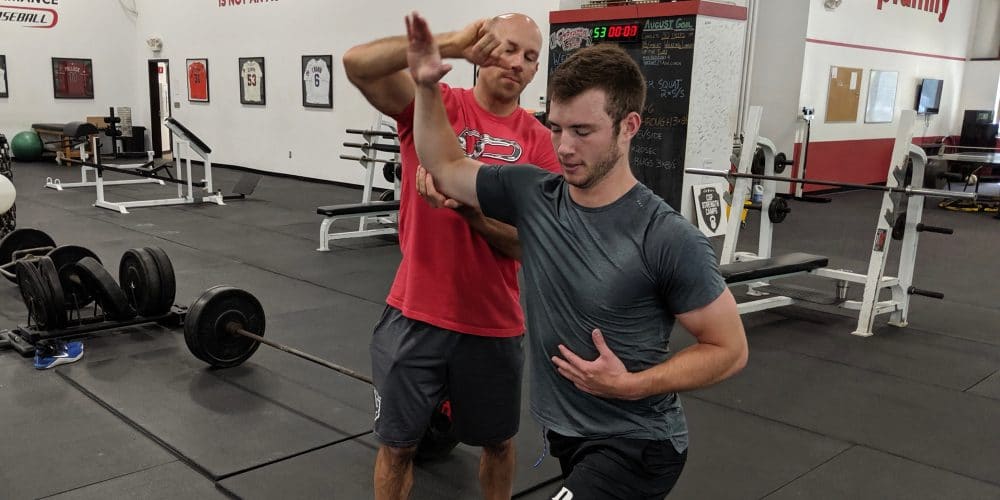 Jarvis spends five to 10 minutes with soft-tissue warm-up, then another 10-15 on actual warm-up before moving on to power training and mobility, alternating with arm care work. As he moves from one activity to the next — from slamming medicine balls against the wall and the floor to “anterior-loaded Bulgarian split squats” to sumo dead lifts and plenty more — Jarvis keeps his clipboard close, checking off each completed item. Eric Cressey, the president and co-founder of CSP, floats around the room offering extra guidance when needed.

No two players are on the same workout program; the only thing they all have to share is the music blaring over the loudspeakers, starting with 90s alternative and then moving to heavy metal. At one point, Cressey asks Jarvis to weigh in on the music; Jarvis requests country. “Should have known,” Cressey quips, “for a Tennessee guy. We usually go country on Wednesdays, but we’ll go with it.”

About 90 to 100 athletes from teenagers to 20-somethings will come through the facility on this day, and each of them has his own unique workout program, devised by the CSP staff and the athlete after an initial evaluation at the start of the four-week block.

“We’re constantly reassessing those programs as we see them day to day. So there isn’t just like a position player program and a pitcher program. No, there’s a Bryce Jarvis program and a Sean Burke program and a Riley Gates program,” says Cressey, naming a Maryland pitcher and a BYU pitcher who are also in the facility on this morning.

That individualized approach is a major reason more and more college baseball players are spending their summers training at private facilities like Cressey’s, or Driveline Baseball in Seattle, or Ron Wolforth’s Texas Baseball Ranch. College programs have been shutting down their high-profile arms after heavy spring workloads for years, but the trend of college players who haven’t hit their innings limits choosing private facilities over summer leagues is relatively new. Cressey said this is the third or fourth year he’s seen a substantial number of players opt for his facility over summer ball. …