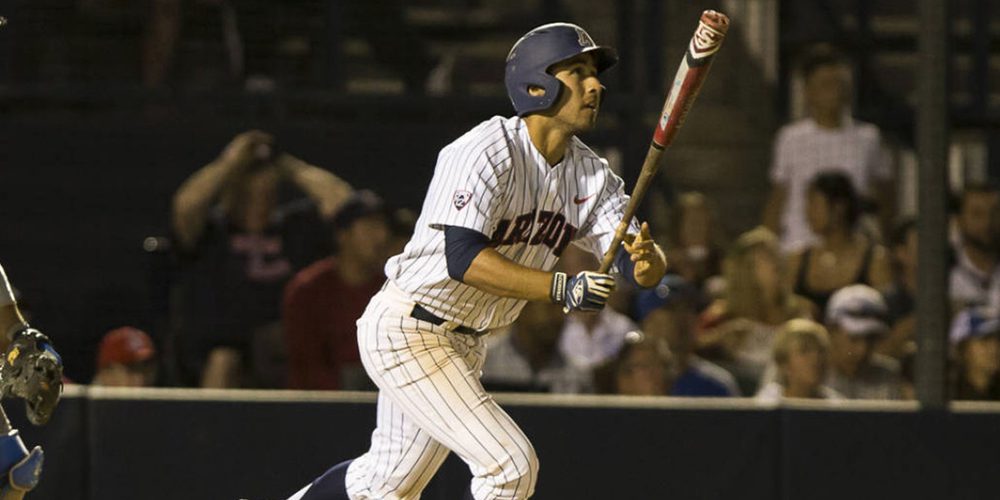 Alfonso Rivas III is a native of … an emerald-green 1993 Mercury Grand Marquis.

And when he was born, if you were to score the attending medical-care professional’s initial movement as if it were a baseball play, it would be E-N … error on the nurse.

The story of Rivas’ life – which already reads like a movie script – includes a chaotic birth scene, a fumble-prone nurse and a clash of cultures, among other highlights.

And that doesn’t even include the significant drama Rivas has created on the baseball field, where he is a sophomore standout hitter/pitcher for the 15th-ranked Arizona Wildcats (5-0).

Rivas, a 5-foot-11, 185-pounder who throws and bats left, has a knack for the clutch play. A perfect example came in last year’s College World Series, when he came in from left field to face a lefty batter with two runners on and two outs in a game Arizona led 5-1 over Oklahoma State.

With Colin Simpson at the plate, Rivas struck him out to earn the save, vaulting Arizona to the CWS Finals. 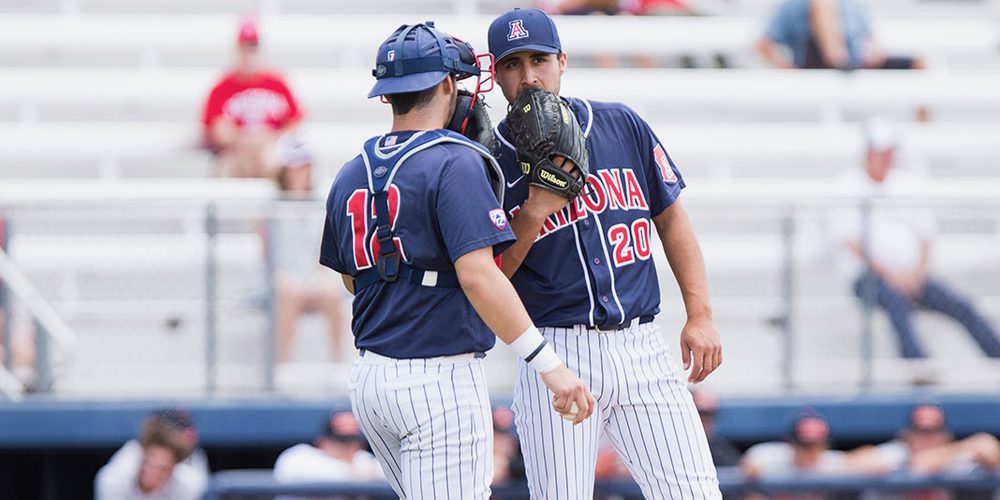 “I put him in purely based on my trust in his competitiveness,” Arizona coach Jay Johnson said of Rivas, who is far from overpowering with a fastball that tops out at 88 mph. “You expect him to come through based on his demeanor.”

Rivas, who is hitting .417 (5-for-12) this season with three doubles and eight RBIs in four games, makes baseball seem like there’s nothing to it, no matter what task he’s given.

Then again, when you enter the world the way Rivas did, why get nervous about something as relatively mundane as a baseball game?

His parents – Alfonso Jr. and Sandra – had crossed the border from Tijuana just so their son could be born an American citizen and thus be entitled to a better life simply due to that geographical adjustment.

The couple was at a friend’s house in San Diego when Sandra went into labor. Alfonso Jr. took the wheel of the Grand Marquis with his wife in the front seat. He put 98.1 – a classical-music station – on the radio in an effort to calm his wife.

But Rivas III wasn’t waiting around.

“Alfonso decided to come out right away,” Sandra said of her son. “It was 7 a.m., and the highway was congested. We couldn’t make it (to the hospital) in time.”

The delivery went well, and Sandra’s husband kept driving while she used her pants as a makeshift blanket for her baby boy.

When they got to Mary Birch Sharp Hospital, Sandra was helped into a wheelchair, and the nurse hastily grabbed little Alfonso. But because the umbilical cord had not yet been cut, the baby slipped out of the nurse’s hands.

Alfonso landed on his head.

“The nurse said my boy was turning blue,” Sandra said. “He was in newborn intensive care for three or four days. That nurse went to see him every day. Thank God, there was nothing wrong with Alfonso. We were blessed.”

After Alfonso was born, the family went right back to Tijuana to live. It wasn’t until Rivas was in the fourth grade that the family decided to move to Chula Vista, a border city that is part of the Greater San Diego metropolitan area.

The only problem was that no one in the family spoke English at that time.

“That was a barrier to overcome,” Rivas said. “It was unbelievably hard. I had to have tutors. I went to summer school for seven years in a row. It was a grind.”

Aside from the academic challenge, the Rivas family also faced financial difficulties in the short term.

Fortunately for Rivas, he befriended the Weisz triplets – Keaton, Zach and Chandler – who have all gone on to play Division I baseball.

Rivas was about 12 when he met the triplets – they played against each other in travel ball at the time – and, pretty soon, an invitation was extended. Rivas went to live in the Weisz family’s huge house in north San Diego.

The property came complete with a baseball field and a batting cage – a dream come true for Rivas.

Jonathan Weisz, the triplets’ father, helped Rivas get into La Jolla Country Day, one of the best high schools in the state.

There was just one problem: The Rivas family missed Alfonso, who is the second of four siblings all born in the U.S.

There’s Sandy, a 5-11 junior goalie on the women’s soccer team at San Diego Christian College, an NAIA school; Santiago, a defender and midfielder for the Chula Vista Soccer Club; and Angel, a 10-year-old who battles Down’s Syndrome, and, according to Sandra, is even more charming with the ladies than Alfonso.

“Mr. Weisz offered to open his home to me until my dad got on his feet (financially),” Alfonso said. “I ended up staying there all four years of high school.

“I would come home on weekends or when I could every couple of weeks. It was really hard because my parents felt like I didn’t want to be home with my siblings. It was tough to hear that at such a young age. But it taught me that you really need to show affection to the people you care about.”

Although Rivas is a USA citizen who can now blend easily from American culture to his Hispanic roots, there is no question how he identifies.

“I feel more Mexican,” Rivas said. “I grew up in a Mexican household. Back then, I would cross the border to go see my grandparents and play baseball.

“Even though I lived in the U.S., I had a Mexican lifestyle. We would go to church every Sunday and then have carne asada (a beef dish) with my family.”

Although President Donald Trump’s views on Mexicans crossing the border have been hurtful to many and well-documented, Rivas said he hasn’t let that bother him.

Trump started his presidential campaign in June of 2015 by labeling Mexican immigrants as criminals, saying that our neighbors to the south are “bringing drugs, bringing crime. They’re rapists. And some, I assume, are good people.”

That type of speech would shake anyone, but Rivas – like always – has remained calm.

“We’re hard-working people,” Rivas said when asked what he would tell Trump about Mexicans. “We’re just trying to live a better life.”

A Natural In Baseball

To say Edman was impressed would be an understatement.

“The poise he plays with as a college sophomore is the same that he had when he was in the eighth grade,” Edman said. “Most 14-year-olds competing against high school seniors would be nervous. But he has a rare mix of confidence and humility.

“Nothing bothered him. On the mound, he was a strike-throwing machine. At the plate, he had a sophistication you don’t see at that age. He didn’t chase pitches.”

Off the field, Rivas was comfortable in any social setting.

“We’re all better off,” Edman said, “for having him here at Country Day.”

Johnson met Rivas in 2013, when he was an assistant at the University of San Diego. Ten days later, he was hired as the Nevada head coach, and he tried to recruit Rivas.

The match didn’t work because Rivas wanted to play in the Pac-12. Ironically, Johnson went on to take the Arizona job last season.

By then Rivas had already signed with Arizona.

“Within a couple of days of getting the job,” Johnson said, “I met with him and his mom to make sure they knew I was excited about having him here.”

But those raw numbers don’t take into account his ability to come through in the clutch. There was his game-tying ninth-inning triple against UCLA – moments before he scored the winning run.

In a NCAA regional elimination game against Sam Houston State, Rivas had a double, a triple, a walk, two RBIs and the save in a 6-5 win.

In the clinching game of the super regionals, he went 2-for-5 with one RBI and one run scored in a 6-5 11-inning win over Mississippi State. He had a game-tying single in the ninth.

Two of his three saves came in a postseason in which he did not allow a run in 1 2/3 innings, striking out three.

And in Arizona’s past three walk-off wins – one this year and two in last season’s playoffs – Rivas had a ninth-inning, game-tying hit in each.

“I like to consider myself more of a hitter than a pitcher,” Rivas said. “But whatever my coach wants me to do, that’s what I am at that time. I can adjust.”

Rivas has been adjusting exceptionally well for 20 years now.