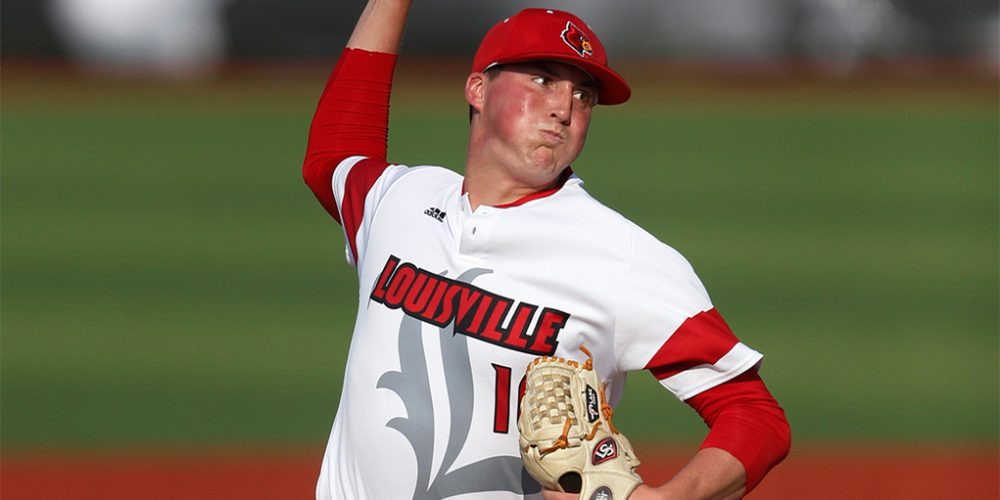 Louisville Brings Back The Funk

It feels like Kyle Funkhouser’s been around forever already, but he’s back for another year. Not that there was really anything left to prove after 287 1/3 collegiate innings, in which he’d struck out 281 batters, most of them as the Friday starter for one of the premier programs in the country. Funkhouser had ticked almost all of the career achievement boxes: a spot on the collegiate national team, two trips to Omaha (and one pole-scraping David Olmedo-Barrera home run away from a third), and an offer to play pro ball for the Los Angeles Dodgers, who made him the 35th overall selection in the 2015 draft, the highest a Louisville Cardinal had ever been picked.

He’d developed into a big, physical power pitcher, a durable bell cow of a Friday night starter who seemed certain (or as certain as these things can be) to end up in a big league rotation and stay there.

But Funkhouser turned down close to $2 million from the Dodgers and, shocking everyone, returned to school for his senior year. It’s a gamble whose size and audacity will rival any bet placed across the street at Churchill Downs this season.

That Funkhouser is betting on himself makes him unusual, but he’s doing it for extremely simple reasons.

“It just didn’t work out,” Funkhouser said. “No hard feelings, obviously, I know it’s a business, and it’s one of those things where not everyone’s going to be happy.”

The Dodgers, hamstrung by MLB’s bonus restrictions, simply couldn’t offer Funkhouser the money he was expecting to make, so when the deadline rolled around, the 21-year-old walked away.

“The Dodgers, in my opinion, had a really good first day,” Funkhouser said. “They ended up getting Walker Buehler and me, plus a couple of other guys, like Josh Sborz, and it just kind of came down to at the very end they tried to work the money around, and it just didn’t quite work out.”

Pitching coach Roger Williams said he and Funkhouser had kept in touch after the end of the season, but the Louisville coaching staff didn’t know for sure that their ace would return for a fourth year until the day of the signing deadline. Though he hadn’t expected Funkhouser to come back, Williams had no trouble finding a spot for him on the team.

“I’ve never had this (situation) before,” Williams said. “I’ve never had a first-rounder come back to school in my 25 years, but you don’t know exactly what your pieces are going to be. We didn’t know what (sophomore lefthander and Yankees draftee) Josh Rodgers was going to do and he decided to sign. So getting him back really didn’t affect my thinking. At the end of the day, when school starts in the fall semester, you have the pieces that you have.”

For a kid who’s never made a dime off baseball to turn down not only the Dodgers, but a seven-figure bonus, to try his luck again is truly astounding, not only because seniors have less negotiating leverage than juniors, but because of the potential for his stock to fall on merit.

Which is how he ended up in this position in the first place.

On the heels of a stellar sophomore year, Funkhouser looked like one of the top college pitchers in his draft class, but fell from the top 10 all the way to No. 35.

Back in 2014, Nick Burdi became the highest-drafted Louisville baseball player ever when the Twins drafted him No. 46 overall. Funkhouser said Burdi had expected to go in the first round, and though he signed, falling to the second round was disappointing.

Twelve months later, as Funkhouser was busy cheering on his teammates in a super regional game during the draft itself, the same thing happened to him. 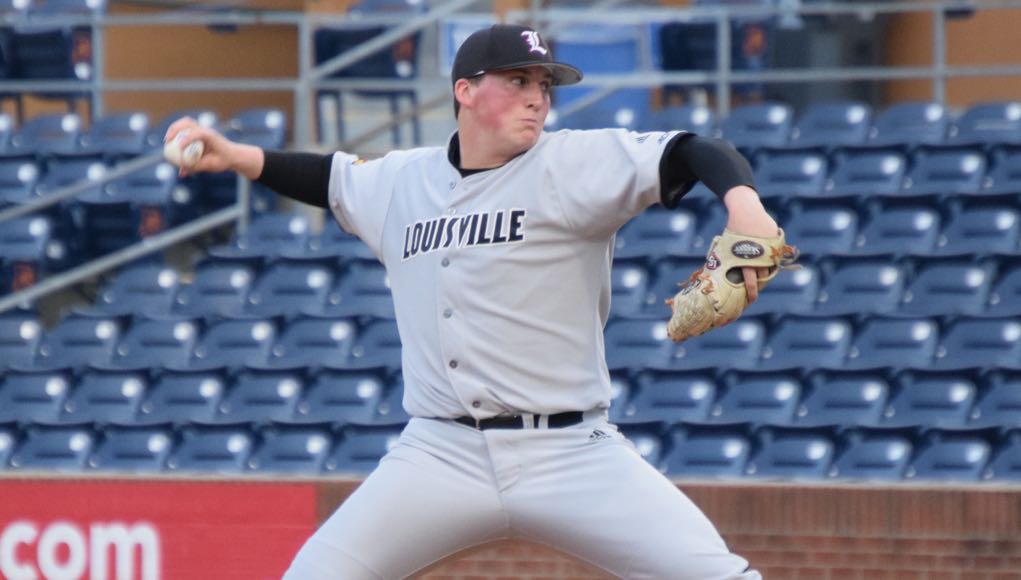 Louisville ace Kyle Funkhouser looks to bring back the funk in 2016. (Aaron Fitt)

“It’s just one of those things, similar to Nick,” Funkhouser said. “Obviously you’re going to be a big fan of yourself, you’re going to wish for the best. You do find some of those ratings and stuff, and obviously you can’t put too much into that, but you say, ‘Hey, this group has me ranked here, and I agree with them!’ But obviously, every player’s going to agree with the highest ranking they get.”

Of course, the difference between Funkhouser’s expectations and where he was really drafted didn’t just happen because he took the wrong prospect list to heart.

On April 10, Funkhouser threw seven shutout innings against Duke, lowering his ERA to 1.96 on the year. He’d had an off day here and there up to that point, but on balance he was putting together a strong case to go in the top 10 or 15 picks. Then he allowed five runs and walked four against Wake Forest, four runs against Bethune-Cookman, five runs in six innings against Clemson, six runs in five innings, with a season-high five walks against Florida State, and didn’t completely right himself until the postseason.

“It was difficult to make an adjustment, because we didn’t know what the problem was,” Funkhouser said. “I never went and saw the trainer about any pain or soreness. Again, another reason why it was so confusing was that I was feeling good. I’d feel pretty good and then I’d go to warm up and get on the mound, and then I’d just feel like I had no juice.”

“There were questions: Is he healthy? He’s always been healthy—Kyle Funkhouser’s never missed a start,” Williams said. “That’s one of the things I love about him. He’s durable, he’s strong, but he was working on short rest two or three starts in a row, the way the games fell he got a little bit short in his normal routine.”

But everyone struggles—the key issue for Funkhouser was timing.

“It was definitely something new, and it kind of hit at the wrong time, down the stretch—and not (just right before the draft), but going down toward the end of the season,” Funkhouser said. “You want to be playing your best baseball in May, versus in March, so you can get your momentum going toward the postseason.”

What separated his rough patch in April and early May from previous bad starts was that it kept going, and with each bad outing the problem got worse as Funkhouser tried to compensate for a lack of energy.

Williams said that, somewhat ironically, Funkhouser’s monthlong crisis got worse because he’d been so successful in the past, and therefore didn’t know what mental or physical adjustments to make to return to form. When an approach that’s worked for years suddenly stops working, it can be unsettling.

“The simple fact of the matter is the kid’s never struggled in his life,” Williams said. “I think, when things aren’t going your way, sometimes you abandon what brought you there, what makes you who you are. You’re not trying to do that, but it just happens by chance.”

Funkhouser said he tried to overcompensate for the lack of power he felt by overexerting, then abandoning his customarily aggressive fastball-slider approach and working more off his changeup. Nothing worked.

“It was the first time in my career where I wasn’t even close to giving my team a chance to win,” Funkhouser said. “Yeah, I’d lost games and all that stuff—it’s baseball—but for the most part, my team had a chance to win games that were 5-3, 4-2, something like that. Whereas at this time it was 5-0 after the third inning. Everyone knows you can come back (but it’s) nearly impossible.”

After losing to Clemson again in the ACC tournament, Funkhouser met with his coaches to come up with a new plan. He reduced his customary midweek workout program and by the time the NCAA tournament came around, he said he felt fresh again.

Funkhouser tossed matching seven-inning, two-run starts against Morehead State (a win) and against Thomas Eshelman and Cal State Fullerton (an eventual 10-inning loss), and just like that, it was draft time.

Both Funkhouser and Williams said that the two tournament starts helped put his regular-season struggles in the rearview mirror, and Funkhouser figures that since he’s back for another year, he might as well go get the two things that barely eluded him in 2015: a third trip to Omaha and a top-15 selection in the draft.

“I just wanted to go back and prove that I can do it every week, that I am a reliable pitcher, a consistent pitcher, and all of those good qualities that I have shown in my career that just weren’t there at the worst time: down the stretch in my draft year,” Funkhouser said.

There’s a truism that great basketball players will add a new thing to their game every offseason—a new post move, or a few more feet of jump-shooting range—and Funkhouser took that approach into fall workouts.

Funkhouser’s had a four-pitch arsenal for a while, but for 2016 he wants to refine his curveball and work on his changeup as a weapon against lefties and righties. In another ironic twist, he feels more comfortable with his changeup because he struggled so much last spring.

“Toward the end of the year last year, when I was going through that phase, I was throwing a lot more changeups anyway, since my fastball didn’t have quite the velocity it normally did, and I was trying to keep guys off it a little more,” Funkhouser said. “So just by throwing it more and more often, it just started naturally getting better and better each week, and now it’s a pitch I feel comfortable with.”

Funkhouser said he wants the changeup to be an option, for instance, after missing the zone with a first-pitch fastball.

The ultimate goal is to throw “whatever pitch in whatever count,” Funkhouser said. “You watch a big-league game and that’s what they do.”

“The slider and curveball are both much better pitches than they were in the past, and he’s throwing his changeup with more confidence,” Williams said, “but at the end of the day it goes back to: everything is off the fastball.”

In other words, to improve those offspeed pitches without losing sight of what made Funkhouser a top-10-caliber player in the first place.