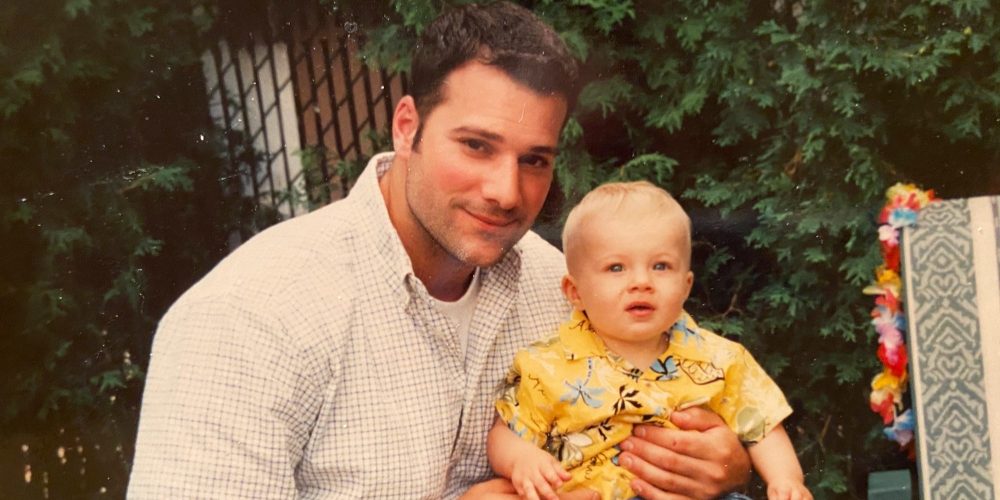 Bucknell's Chris Cannizzaro (right) with his father Brian, before Brian was killed in the 9/11 attacks (Photo courtesy of the Cannizzaro Family)

How that baseball got to Resurrection Cemetery in Staten Island is as touching as anything else in this emotional story of love, loss, strength and triumph.

Brian Cannizzaro, a firefighter, was 30 years old when he raced toward danger, working to save the lives of thousands of people who were stuck inside the World Trade Center when our nation was attacked by terrorists on Sept. 11, 2001.

Chris was just 11 months old at the time.

Two decades later, Cannizzaro – the reigning Patriot League batting champ – said a day does not pass without him thinking of his father. In fact, he writes his father’s initials “BC” along with the words “never forget” and the date of his death (9-11-01) on all his cleats and caps.

“My goal is to live my dad’s legacy and make him proud of me,” Cannizzaro said of his late father. “I hope he thinks I’m exactly like him because that’s who I want to be.”

Jackie Cannizzaro-Harkins, Chris’ mom and Brian’s widow, said she spends every anniversary of September 11 with her son, even when she has to drive three hours from Staten Island to Bucknell’s campus in Lewisburg, Pennsylvania.

“This past September was 20 years, and it hit both of us very hard,” she said.

“Chris is so much like his father that it blows me away – the way he walks, the way he talks and his mannerisms. It’s a gift.”

Jackie and Brian met in a business-law class at St. John’s University.

“It was in the afternoon, and I was bummed because there weren’t many people on campus at that time,” Jackie said. “Then Brian walked in, and I thought: ‘All right, this might not be so bad.’”

Brian, a larger-than-life figure, proposed to Jackie in a grand fashion, too. He popped the question with the help of a cast member during a Broadway play, Beauty and the Beast.

In May of 1999, Brian followed his father, Simone “Sam” Cannizzaro, into the New York City Fire Department. In fact, Brian was given Sam’s badge, No. 11126.

Chris was born on Oct. 27, 2000, and – true to Brian’s form – he was in the delivery room and somehow got the birth on national television.

“The Learning Channel was asking prospective parents if they could videotape a birth,” Jackie said. “I thought it was an insane idea. But Brian said, ‘Jack, we have to do this. They can’t mess it up if it’s on TV’.”

On that fateful day of Sept. 11, Brian was working a mandatory overtime day shift in New York Ladder 101 in the Red Hook section of Brooklyn.

Jackie spent what would be her last day as a teacher, instructing her eighth-grade English class at IS24.

When news reached Jackie that Brian was missing at the World Trade Center, she was beyond shocked.

“It never dawned on me that anything would happen to Brian,” Jackie said. “I thought he was invincible.”

Jackie met John Harkins – a New York police officer – in December of 2003. They married in 2005, but not before Harkins took the unusual step of asking Brian’s parents for permission to wed Jackie.

“When I meet Brian in heaven,” Harkins told Brian’s parents back then, “I want to be able to tell him that I took care of Jackie and Chris.”

Harkins has held true to his word.

For starters, Harkins taught Chris baseball. In fact, when Chris slugged his first homer, Harkins retrieved the ball and placed it on Brian’s headstone. The ball remains there to this day.

That gesture is typical of the respect Harkins has always had for the man he never met but has still become such a big part of his life.

Chris, for one, greatly appreciates Harkins.

“I couldn’t have a better relationship with a better guy,” Chris said of Harkins. “We’re super close.

“He’s the one who got me into baseball. He put a batting cage in our backyard. He constructed this crazy thing, and he tossed baseballs to me every day for 10 years.

“I never used the word ‘step-dad.’ He’s the best. He’s always been there whenever I’ve needed him.”

Harkins and Jackie have had two children together: Luke, 16, and Kyle, 14.

Jackie said Kyle is “profoundly autistic”, which is just another challenge for a family that has dealt with enormous obstacles.

As for Chris, there’s a special bond with his little brother.

“Chris loves Kyle so much,” Jackie said. “All of this has made Chris such a compassionate individual. The person he has become amazes me.”

Chris Cannizzaro’s first big moment on a national stage came in 2011, when he threw out the first pitch at a Mets game.

The day before that, he met President Obama at Ground Zero. Obama was there shortly after the person who orchestrated the 9/11 attacks, Osama Bin Laden, had been killed by U.S. soldiers.

Harkins felt Chris – who was 10 years old at the time — was mature enough at that point to understand the unfolding events. As it happened, Obama struck up a conversation with Chris, and a photo of that scene made the cover of the New York Times.

That photo, in turn, got Chris – a huge Mets fan – invited to throw out the first pitch. Chris was introduced to Mets captain David Wright.

When it came time for the first pitch, Chris threw a bullet to Mets catcher Josh Thole.

“He missed it,” Chris recalled. “Everyone else thought it was a strike — maybe a bit low.”

Cannizzaro, now listed at 5-11 and 180 pounds, was truly undersized when Heather first saw him.

“Chris was about 5-9 and 145 pounds, but he tracked the ball well,” Heather said. “He had good bat speed and energy.

“We offered pretty early for us – in his junior year – and he committed pretty quickly.”

Poly Prep coach Matt Roventini said Cannizzaro was just a fourth outfielder as a sophomore. But when the family of starting outfielder Pat DeMarco – who went on to Vanderbilt and now plays in the New York Yankees organization — moved to Georgia, that opened up a starting spot for Cannizzaro.

As a freshman at Bucknell, he was the Opening Day starter in right field. And although an injury limited Cannizzaro to just 14 games that season, Heather said he saw tremendous progress.

“I knew there was something there beyond just a speedy outfielder,” Heather said. “He has juice and electricity in his bat for his size, and his evolution came to fruition when he started to recognize the breaking ball later in his freshman year.

“Chris could jump on a fastball from Day One. The key is swinging at the right breaking ball. Chris hits it well when the ball stays up, and he lays off the chase breaking pitch.”

Cannizzaro hit .328 in the COVID-shortened 2020 season, but he had a major breakthrough last season, leading the Patriot League in hitting (.355) and in slugging percentage (.565).

A psychology major with a minor in economics, Cannizzaro is set to graduate from Bucknell in May.

He will still have two more years of eligibility as a graduate transfer at Virginia Tech next season, and proving himself in the ACC is one of his goals.

“I want to get to the highest level so I can give myself a chance to play pro baseball,” Cannizzaro said.

In 23 games this season, Cannizzaro is hitting .348/.413/.511 (.913 OPS) with seven doubles and two homers in 92 at-bats. He missed seven games due to a concussion stemming from getting hit in the helmet with an upper-80s fastball on March 26 against Army.

Jackie was at that game, video-taping his at-bats. Jackie’s gasp can be heard loud and clear on that video, but — if anyone knows this family – that pitch is not going to keep Cannizzaro away from baseball.

Roventini expects Cannizzaro to keep on surprising the doubters.

“At Poly Prep, we’ve helped send guys to Vanderbilt, Duke and other D1 schools,” Roventini said. “But I had (a rival coach) tell me Chris was our hardest out in 10 years.

“I wasn’t surprised at all that he won the Patriot League batting title, and I can’t wait to see what he does at Virginia Tech. His swing is so clean and good. He has super hands and unexpected power.

“Guys with Chris’ size often get overlooked. Credit to Bucknell to see past that.”

“Some players are 6-foot-4 and projectable,” Roventini said. “Everything Chris has is based on production. It’s not about looking the part.