All Eyes Up. Chris McCready watches his salvo go deep into the night in the ninth inning.

Chris McCready couldn’t truly see, feel or hear anything as he floated triumphantly around the bases on Friday – all he knew was that he wasn’t making that 360-foot trip alone.

“I had an angel on my shoulder,” McCready said.

That “angel” was his mother, Susan, who had recently passed away at the age of 59 due to ovarian cancer.

McCready, a backup outfielder for the University of San Diego, lost his mom just eight days prior to Friday’s game against Loyola Marymount.

The LMU game represented his first at-bat in 17 days. Yet San Diego coach Rich Hill, down to his last out in a game that the Toreros were trailing 10-9 with a runner on base, called on McCready as a lefty pinch-hitter against LMU righthander Harrison Simon.

San Diego’s scouting report on Simon was substantially off when it said to look for mid-80s fastballs. Instead, Simon dialed it up to 96 mph, and McCready swung late and missed for strike one.

On the next pitch, McCready, who was having a hard time picking up the baseball, took another fastball for strike two. He said Simon had a “funky” delivery, and the angle and release point had him a bit confused.

McCready, who was batting just .160 at the time with only three singles and one double to show for his year’s work, surely seemed – to outsiders at least – like a strikeout ready to happen.

“I knew my mom was going to be with me, and I went up there with an empty head,” he said. “I just tried to slow everything down.

“It helped me relax knowing that there are bigger things in life than one at-bat. That took the fear out of it for me.”

Suddenly fearless, McCready stepped out of the box, took a deep breath and told himself that he’s done this before.

He then choked up on his bat, determined to “stay short to the ball.”

What happened next was magical.

The Toreros explode! San Diego’s dugout reacts to Chris McCready’s two-run ninth-inning blast which proved to be the winning runs at LMU.

McCready leaned into a fastball that was left over the plate, quickly turning it around like a bullet headed to right-center field.

“I couldn’t tell if it was going to be a double off the wall or if it would have some carry to it.”

San Diego right fielder Hunter Mercado-Hood said that at the crack of the bat, the “whole team thought it was a gapper.”

It was more than that.

It was majestically, poetically and spiritually much more than that.

“He’s a strong kid,” Mercado-Hood said. “The ball hit the light pole about 15 feet beyond the fence. It probably would have gone 390, 400 feet. That ball was crushed.”

As soon as the ball left the yard, the San Diego players seemed to take leave of their senses. The kids were so happy that they nearly ran on the field.

“It was pandemonium,” Hill said.

“When it went over, we freaked out and lost our minds. There is no fence in that (road) dugout, so we just sprinted out, almost on the field. It was like a bunch of ants running out of an ant hill.”

Meanwhile, McCready was confused. He knew he had connected on the barrel, but he saw the ball as a “low line drive” and was shocked when he got near first base and saw it hit that light pole.

McCready can’t quite remember the next several seconds of his life.

“I kind of blacked out around the bases,” he said.

After he turned third base, however, he saw his teammates waiting for him at home plate.

“Those guys have been there for me through this tough time,” McCready said. “It felt good to finally contribute.”

Just before he stepped on home plate, McCready pointed to the heavens in a gesture meant for Susan.

“I wanted to let her know that I knew she was there for me and that I’m thinking of her,” he said. “This was for her.

“That moment wasn’t emotional in a sad way for me. It was a realization that she may not be here physically, but that she is now an angel watching above me.”

McCready’s two-run homer on a two-out, 0-2 pitch gave San Diego an 11-10 lead, but the Toreros still had to navigate a crazy bottom half of the ninth in which LMU had a runner reach third base with one out and both teams had to endure a 17-minute delay when the lights went out in the stadium.

Once the game resumed, reliever Jonathan Teaney used a strikeout and a groundout to get out of the jam, giving the Toreros their memorable 11-10 win.

The next morning, Hill joined McCready at a funeral service for Susan. Hill watched and listened as McCready delivered a moving eulogy for his mother and talked about the baseball game he had won in his mother’s honor just a few hours earlier.

At the service, Hill said he learned a lot he didn’t know about Susan, who was a wife to Mark, a mother of Chris and Matt, a bank vice president and a die-hard baseball fan who had fought hard against cancer for the last 11 months of her life.

“She was a super vivacious woman, a bright light,” Hill said. “She lit up a room everywhere she went.”

McCready said he was often embarrassed as a young child because his mother’s voice could be easily heard above the crowd, passionately rooting for her sons and their teammates.

But McCready, of course, grew to appreciate her unabashed love for her family and for baseball.

In fact, from the time he was 12 until age 16, he, Matt, Susan and Mark took summer vacations around the country until they had visited every stadium in the major leagues.

“Those family trips are something I will always remember,” McCready said. “My mom was selfless and genuine. And when it came to baseball, she was very energetic.” 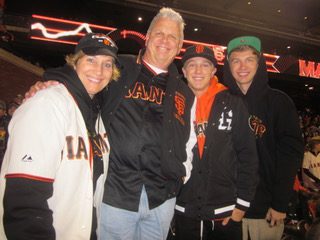 She also made an impact on people, including Hill.

On Sunday, one day after the funeral service, Hill bought a book called, “The Afterlife of Billy Fingers”.

Hill, intrigued by what he had witnessed on Friday, said he had “devoured” the 191-page book by late Sunday night.

He then started replaying Friday’s game in his mind – the seven lead changes, the lights going out, the first homer of McCready’s two-year Division I career and one other interesting factor.

“The wind that night was blowing north by northwest, which in Los Angeles is a miracle,” Hill said. “The wind howling from the north like that may happen there one night a year, and Chris hit a line drive that seemed to hit the jet stream and became a no-doubter.

“Is that a coincidence? You have to ask yourself. There are so many stories about supernatural things – you could feel the presence of something spiritual (on Friday night).

“I know people will read this thinking, ‘Here’s a California coach thinking that this is a spiritual matter … but I really do.”