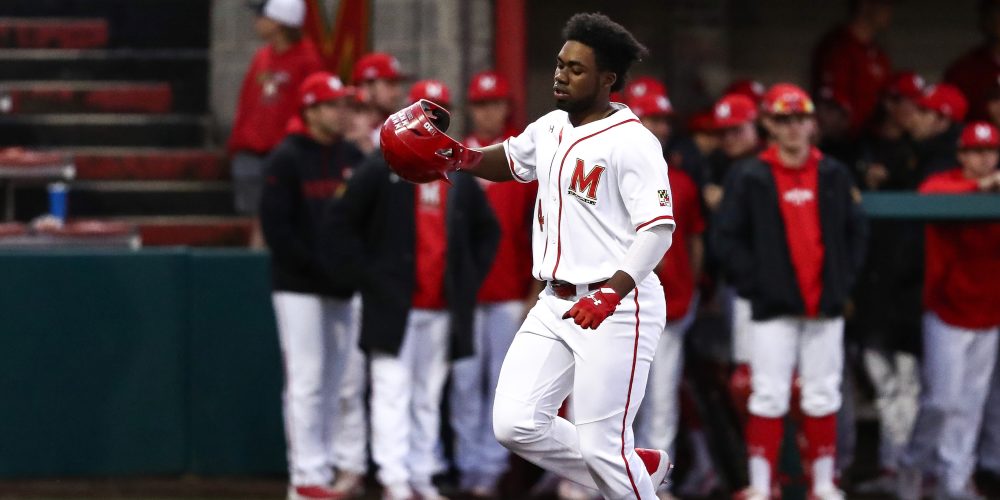 Maxwell Costes had just hit four homers in one summer-league game, and yet there was no joy or jubilation for the University of Maryland first baseman.

There was only despair and depression.

“I was truly suicidal,” Costes, now a Terrapins senior, said in a recent interview with D1Baseball.com.

“It was the summer of my freshman year (2019). I led the league in homers. I was the Player of the Year. I was having a phenomenal year.

“But I was miserable.”

Costes said there was no reason for his malaise other than some form of mental illness which is not uncommon, especially for young people.

Suicide is the second-leading cause of death for college students, according to the American Foundation of Suicide Prevention.

Here’s a truly scary statistic: A 2018 CDC study showed that more than 50 percent of people who died by suicide had no prior diagnosis of mental illness.

Costes never acted on his suicidal feelings, thanks in part to his summer-league teammate, Paul Franzoni, who encouraged him to play that night’s game.

But even that was no panacea. After Costes had hit those four homers, and even after he had signed a bunch of autographs for admiring fans, things didn’t change.

Rather than go out and celebrate his huge achievement, Costes went home and just laid in bed with the lights on all night.

“I’ve always been able to compartmentalize,” Costes said. “I was able to put those feelings aside for the four hours I was at the ballpark.”

Costes said he also felt suicidal in the fall of his sophomore year. Restless, he found himself alone in front of the University of Maryland’s main library – at 2:30 a.m.

“I couldn’t sleep,” Costes said. “I hadn’t been sleeping at all for a month-and-a-half. Even though my grades were good and baseball was going well, I was still miserable.

“That was the closest I’ve ever been to taking action. I said to myself: ‘If I can’t do any of this for me, I can at least do it for my friends.’”

Indeed, people are what saved Costes.

“There were days when that was the only thing I had. I wouldn’t be here without my friends.

“What’s the point of having millions of dollars if you don’t have good people to share it with?”

Costes wrote about his depression in September for his school newspaper. He was terrified to do it, but he felt justified when scores of other athletes around the country reached out to him.

“’Bro, I’ve felt like this, too’,” Costes said of the reaction his story generated.

“At first, it worried me. ‘Why do we all feel like this?’ But at least it got the conversation going. As athletes, we are expected to be emotionless. We are supposed to separate our athletic life from our outside life. You have to be so good at managing your emotions, it gets hard, man.”

A native of Baltimore who went to a high-end private high school, Costes said he has contemplated the origins of his battles against depression.

Costes said genetics have likely played a role. But he also said that the constant need to prove himself has caught up with him at times.

“Coming from a tough neighborhood (in Baltimore), I went to the Gilman School. I was always surrounded by kids who came from much better backgrounds. My attitude was: ‘Ok, I’m going to prove that I’m just as good as these kids.’

“Going to college, where there were three high school All-Americans in my (Terrapins) recruiting class. I would tell myself, ‘I’m just as good as these kids’, even though I never went to a Perfect Game showcase.

“Perfect Game had me listed as a right-handed pitcher all the way until my sophomore year of college.”

Costes said he has learned perspective.

“It’s not a bad thing to constantly want to find ways to improve yourself,” Costes said. “But there needs to be some perspective in saying: ‘What is enough?’

“I’ve come to realize that who you are is already enough.”

Due to the COVID-19 pandemic, there has been a steep increase of mental-health issues among teens.

Last month, a CDC survey found that more than 40 percent of teenagers reported feeling “persistently sad or hopeless”, and 20 percent said they have contemplated suicides.

Dr. Kimberly O’Brien, a clinical social worker at Boston Children’s Hospital who has worked extensively with athletes and mental-health issues, said sports standouts committing suicide is not a new phenomenon.

“It’s always been a problem. The difference now is that a number of high-performing athletes have died, and these deaths have been recognized by their families publicly as suicides,” said O’Brien, who has written a book: Emotionally Naked, A Teacher’s Guide to Preventing Suicide and Recognizing Students at Risk.

“People are being more honest. With this honesty, the hope is that we can get more help.”

The structured social networks of sports teams can offer a buffer against isolation, creating a sense of accountability and purpose. Those factors reduce the risks of suicide.

However, only 10 percent of student-athletes seek mental-health help. There’s a stigma of athletes not being allowed to show weakness, which inhibits open dialogue or even a conversation on available resources and education.

“What I worry about is people assuming sports are bad for mental health, and that is actually not true,” O’Brien said.

“I’m focused on the issue on whether the college institutions and coaches have the skills to help student-athletes who may be battling depression. It’s about changing the culture so that coaches don’t see athletes who are struggling with mental-health concerns as weak.”

The four D1 athletes who have died recently by reported/apparent suicides were all well established in their respective sports:

• Martin, 23, died on April 2. He was a lacrosse goalie and a graduate student at Binghamton, studying integrative neuroscience.

A three-time all-league goalie in high school in Syracuse, he appeared in 27 games during his five-year Binghamton career.

“I look back and ask, ‘Could I have done something?’ I don’t know,” his high school coach, Shaun Smith told the Post-Standard.  “There needs to be more outreach and education (on mental health).

“Robert could’ve been big time in any sport he chose. He was an awesome leader.

“The mental health crisis is America is out of control.”

• Shulze, a 21-year-old distance runner in track and cross-country, died on April 13. A native of California, she was the Ventura County Athlete of the Year in high school before choosing Wisconsin, her parents’ alma mater.

At Wisconsin, she earned All-Big Ten honors three times – twice in cross-country and once in track.

Off the field, she had interned at the Wisconsin state legislature, and she had volunteered as a poll worker in the 2020 presidential election. Social causes, women’s rights and politics were passions for Shulze. Her thirst for adventure had already taken her to Africa, Alaska and Europe.

“Sarah took her own life,” Shulze’s family said in a statement. “Balancing athletics, academics and the demands of every-day life overwhelmed her in a single, desperate moment.”

• Bernett, 20, died April 26. The softball catcher led James Madison to a shocking run to the 2021 College World Series. She started 43 games as the Dukes went 41-4, advancing to the CWS for the first time in program history.

This year, Bernett was tearing it up on the field. On April 24, she went 4-for-4 with a homer and two doubles. On April 25, she was named the Colonial Athletic Association’s Player of the Week.

But one day later, she was gone. James Madison cancelled the rest of its season.

The last at-bat of her life was a home run.

= Meyer, 22, died March 1. She was Stanford’s starting goalie in 2019 when the Cardinal won the NCAA women’s soccer national championship. Like Shulze, she was from Ventura County in California.

Just a few months away from graduation, Meyer was found dead in her dorm.

Meyer played in 50 matches at Stanford, producing 20 shutouts. She was majoring in internationals relations with a minor in history, and she made the Pac-12 honor roll twice.

“There’s so much pressure on athletes,” Meyer’s mother said. “There’s anxiety and stress to be perfect, to be the best, to be No. 1.”

Costes, unprompted, referenced Meyer’s death in his comments to D1Baseball.com.

“What I always tell people is that this can happen to anyone,” Costes said. “Katie Meyer, that’s one of the most heartbreaking stories I’ve ever read.

“I look at that and think: ‘That could have been me.’ If someone like Katie Meyer, famous all-everything college athlete … if she can struggle, what does that mean for everybody else?”

Costes has tried to make sense of all these tragedies.

“It means that these struggles we have are natural,” Costes said. “It always seemed like the most backward thing was to hide it and not talk about it.

“People stigmatize it, but I think we need to talk about it more than ever.”

If you or anyone you know is experiencing suicidal thoughts, call the toll-free National Suicide Prevention Lifeline at 800 273-8255. The line is manned seven days a week, 24 hours a day.