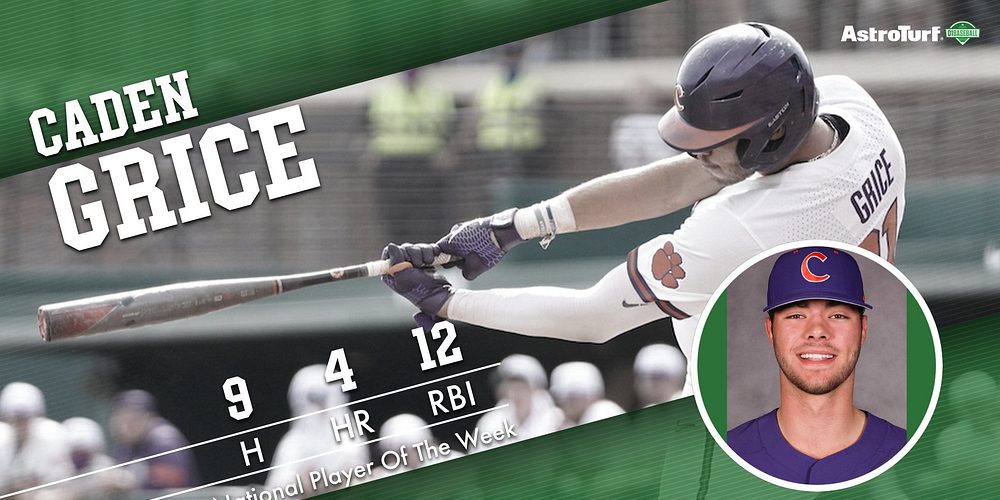 Clemson coach Monte Lee remembers the moment he realized just how special Caden Grice was going to be.

A 6-foot-6, 240-pound behemoth, Grice’s prodigious pure talent was no secret — scouts already regarded his raw power as a true 80 on the 20-80 scouting scale during his high school days in Greer, S.C., where he won the state Gatorade Player of the Year award as a senior. He also put on plenty of jaw-dropping power displays in fall ball as a freshman at Clemson, but most of his moonshots went to the pull side, and it seemed like his feel for hitting was a work in progress. In fact, Clemson’s coaches thought he might make more of an impact as a lefthanded pitcher than as a lefthanded hitter early on in his career.

“I can remember in the fall, we were doing some different things on the field drill-wise, and he does some drills that shorten up his swing, because early on in the fall, his swing was what I would call ‘up and off’ — it was uphill and it would come off the ball. So he would hook balls to the pull side of the field with massive hook topspin to them. He’d hit them 110 miles an hour but they’d be ground balls to second or hooking line drives to right,” Lee said. “He started learning to tighten up his swing and his turn, and all of a sudden the same pitch he was hooking, he’s hitting them over the batter’s eye and out to left-center field. I think he just learned, ‘If i can just shorten my swing and use an opposite field or up the middle approach, I can hit them just as far that way.’

“The day the light came on, his fellow two-way guy Davis Sharpe was pitching, and Caden hit a pull-side ball off the batting cage — we’d seen that before, yeah he got one. The next one, he hit up by the clock at the top of our scoreboard [in left-center], and that’s like 450 feet that way. That was the second at-bat of the intrasquad, and when he did that I was like, ‘my God. We’re starting to see something we haven’t seen here in terms of power.’ And he started just drilling balls that way.”

And that’s exactly what Grice did this weekend against Louisville. Three of the four home runs he hit on the weekend went to the opposite field, illustrating just how quickly his approach has matured. He went 9-for-13 with 12 RBIs on the weekend, leading Clemson to a massive sweep of the perennial ACC powerhouse Cardinals, who had not been swept in any series since 2011 (before they joined the ACC). Grice smashed three homers and drove in eight runs in Friday’s opener, then hit a game-winning solo homer in the eighth to break a 4-4 tie on Saturday. He kept rolling on Sunday, going 4-for-4 with two RBIs and two walks. For good measure, he even threw a scoreless inning of relief on Friday, striking out two. For putting Clemson on his broad shoulders and carrying his team to the sweep, Grice is the D1Baseball/AstroTurf National Player of the Week.

Grice does still have ace potential on the mound, and Lee said he wants to find a way to get him more pitching opportunities, but for now it’s clear that his bat is his calling card, as he’s logged just five innings on the season. But as Clemson’s starting first baseman, he’s now hitting .358/.458/.686 with 12 homers and 43 RBIs, making him one of the front-runners to win national Freshman of the Year honors. His production is starting to creep up on Seth Beer territory. One of the most productive college hitters of the 21st century, Beer hit .369 with 18 homers as a Clemson freshman in 2016, and his flair for the dramatic made him an instant folk hero. Grice is starting to create that kind of buzz, too.

“It’s funny, the Seth Beer mania was the first time I had went through something like that, so we’ve been through this process before. He certainly deserves that type of recognition, just like Seth got when he was a freshman,” Lee said. “The thing I like about Caden, he’s got the kind of head on his shoulders to where he can handle it too. I think he enjoys the recognition, he enjoys the limelight, but he can also handle it, he’s got that level of maturity about him. His dad is a SWAT guy and does a lot with him, so he’s been raised in a disciplined household. His mom and dad come to every game and keep him grounded. He believes that he’s this good but he’s also humble enough to understand that he’s got to stay grounded and keep working.”

Lee said Grice is a thirsty student of the game, often talking to the coaches about his at-bats and about opposing pitchers in the dugout. And of course, his aptitude for processing instruction is nothing short of remarkable. Typically, long-levered 6-foot-6 power hitters have big holes that can be exploited by opposing pitchers, and it’s rare to see a slugger with that kind of size also show advanced feel for hitting at such a young age. At the start of the fall, Grice was in that typical powerful-but-raw category, Lee said, but his insatiable appetite for knowledge and his freakish athleticism helped him make major adjustments over a stunningly short time period.

“He’s one of those guys, what makes it so fun to coach him is every time he does something new, like at the plate, it’s like a win for him,” Lee said. “If he hits an offspeed pitch the other way, or a fastball up up the middle, he’s starting to figure out how to get to different pitches, and when he has success, it’s almost like a challenge to him: getting to the ball in, getting to the ball up, taking an offspeed pitch the other way. He looks at the game as different challenges he has to master to become a real hitter.

“I had a conversation with him early in the spring, I said, ‘Everybody compares you to Joey Gallo. I want people to comp you when you leave Clemson to Freddie Freeman. No disrespect to Joey Gallo, but I want you to be more than a guy that hits for power and swings and misses. I want you to be a true professional hitter that has power.’ He’s taken that to heart, I think.”

Aaron Fitt
wpDiscuz
You are going to send email to