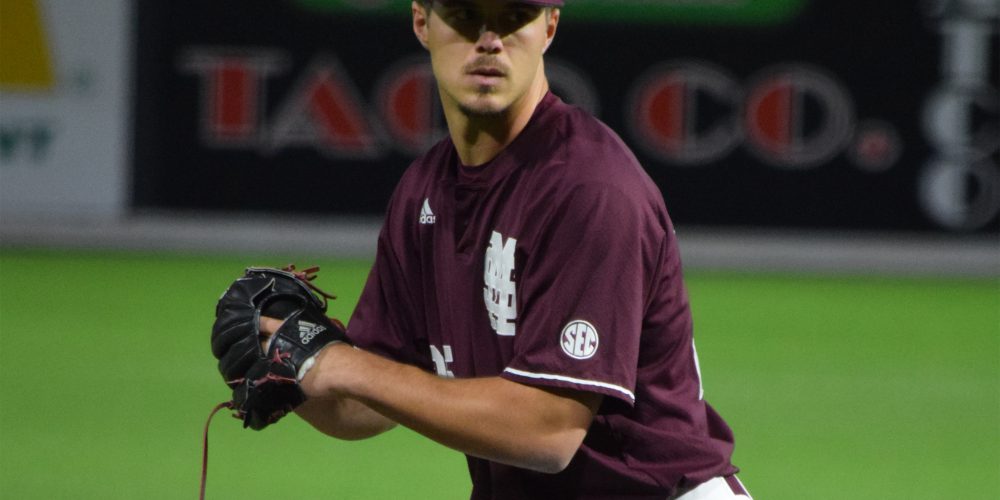 NASHVILLE, Tenn. — It’s easy to tell Mississippi State heralded righthander Dakota Hudson is enjoying and making the most of the limelight that has been placed on him the past few months.

Hudson, a 6-foot-5, 215-pounder, made just 17 appearances, all in relief, for the Bulldogs last season. But, as we’ve chronicled many times, his growth as a pitcher didn’t truly come until last summer at the Cape Cod League, where he showed premium velocity and pure across the board stuff. That development was all fine and dandy, but still not quite the same as going out and putting up similar results in the Southeastern Conference.

The righty has had some his strong moments already this season. He began the year with a respectable showing against Florida Atlantic, striking out eight in five innings, while he, to no surprise, silenced Massachusetts-Lowell with nine strikeouts in six shutout innings. He also showed much potential in starts against Pac-12 foes UCLA and Oregon, striking out 15 in 12.2 innings of work.

Those were good outings, but pale in comparison to the start he put together against No. 2 Vanderbilt in a game that his Bulldogs won 2-1 in thrilling fashion in 13 innings.

Hudson has always had a huge arm, but didn’t always possess consistency and a superior mental approach. All those pieces came together against the Commodores, and the rising prospect had the best start of his three-year collegiate career, raising plenty of eyebrows in a scout section that easily numbered between 20 and 30.

“I thought his command was really good, he just did a really good job of locating his fastballs in on lefthanded hitters,” Mississippi State coach John Cohen said. “He just looked really good. He was throwing 100 pitches and still getting up to 94 and more. And his cutter was good, and when he’s doing all of that and he’s in rhythm, he’s really electric. It was a great Friday night in college baseball and our kids just battled.”