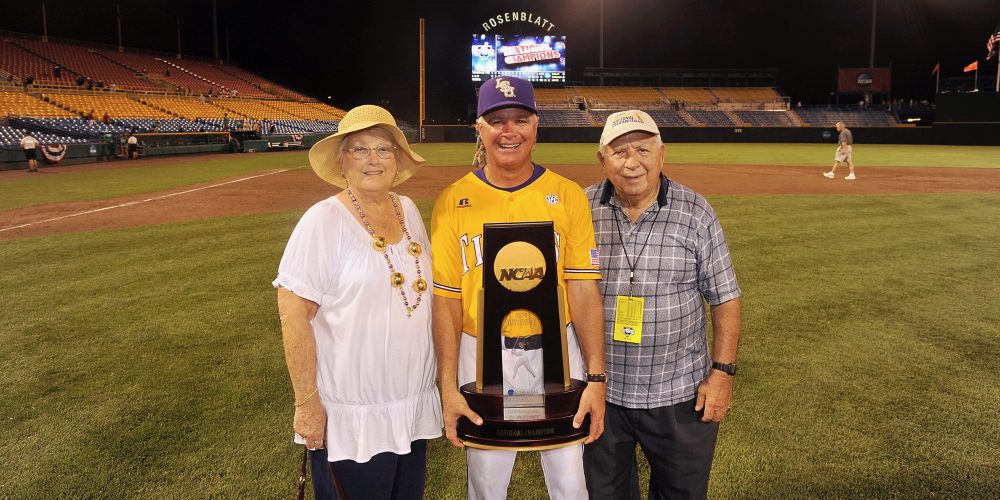 Demie Maineri, the legendary coach of Miami’s Dade North Falcons for 30 years, was 90. He was the first junior college baseball coach to win 1,000 games. He started the Dade North program in 1961, won a national title in 1964, returned to the Junior College World Series four more times over the next decade and was named to the NJCAA Hall of Fame in 1983.

He was also elected to the National College Baseball Hall of Fame in 2014.

Casual baseball fans who aren’t familiar with junior-college baseball might not appreciate the scope of Demie Mainieri’s accomplishments, but Division I coaches knew their way to Dade North.

So did pro scouts.

“He was a big mentor, a legend,” Dent said of Demie Mainieri. “He was one of those tough little Italian guys. If you were on first base, you better break up the double play or you’d hear about it.”

Paul Mainieri knows all about that Dade North history. He lived through much of it, and he relived a lot of it to this reporter on Friday.

“I coached the night Daddy passed,” began Mainieri, his feelings still raw. “He passed at 9:15 in the morning. I got there (St. James Place, a senior living facility in Baton Rouge) about 15 minutes later. We (Paul, his mother Rosetta and his brother Jim) sat there with Daddy for three hours until the funeral home picked him up.”

For the past few years, the once-sharp Demie Mainieri battled Alzheimer’s and dementia. Knowing this, Paul had decorated his father’s room with newspaper clippings and photos of his illustrious career, hoping it would spark his memory and bring him joy.

As it turned out, it helped with Paul’s grieving process for those three hours as he hung on to his father for as long as he could.

“I looked around the room, and I forgot he was a 90-year-old man who had just passed away,” Paul said. “Those pictures brought him back to life for me. It brought me back to different eras of his life when he was so vibrant – a leader, a mentor.

“It was so emotional for me.” 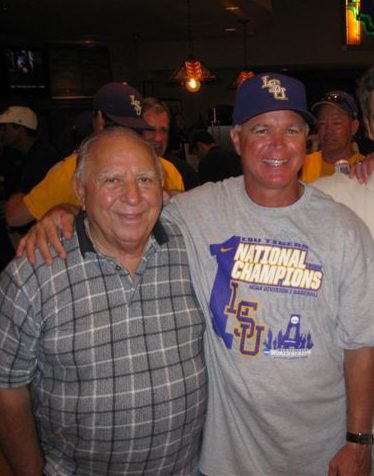 “I told her, ‘Dad would’ve wanted me to coach’,” Paul said. “We spent about 80 percent of our time together on ballfields. I wanted to coach and feel Dad’s presence.”

LSU beat Texas Southern 16-5 that night, even though an emotional Mainieri left most of the coaching to his assistants and did not address the media.

“I wasn’t going to lose on the night my dad died,” Mainieri said.

Mainieri coached that game with his father’s nametag in his back pocket.

Demie’s bio was read over the loudspeaker before the game, and Paul cried through all of it.

“I’m sad I don’t have him anymore, but I feel fortunate I had him for 61 years,” Mainieri said. “I don’t know that I will ever be half the man my dad was, but I will try like hell.”

Bush signed to play at Dade North, for Mainieri, and the pros once again ignored him after his freshman season. The same thing happened after his sophomore year.

Bush may have been discouraged … but Demie Mainieri was not.

“Doc Mainieri changed my life in a tangible way,” said Bush, who played first base at Dade North from 1977 to ‘78. “He said, ‘You will get a chance. These scouts are not seeing the improvement in you. I want you to come play for me in the Cape Cod League, and you should accept the scholarship offer to play at the University of New Orleans.’”

Bush did exactly what Mainieri asked him to do, and – sure enough – the Twins drafted him in the second round in 1979.

“He was always dead honest,” Bush said. “When he recruited me, he said: ‘I’m not going to promise you that you will start.’

“Coaches at other schools told me I would start right away. But not Doc. He told me who I would be competing with, and he said I would have to beat them out, but he thought I could do it.

“He was hard-nosed, and I liked that,” Bush said. “He demanded that we do things the right way. When I got my chance in pro ball, I was very prepared, and I never wanted to let Doc down.”

As Bush – who is now the Chicago Cubs’ assistant general manager – grew older, his relationship with Mainieri evolved into a life-long friendship. He loved to hear his mentor laugh, and Mainieri was an entertaining story-teller.

Through those stories, he found out that Mainieri – who was fiercely loyal — had stuck up for him in the Cape Cod League, refusing the team owner’s demand to cut Bush after a slow start.

Bush went on to make the all-star game at the Cape that summer.

“There have been many times,” Bush said, “that I have reflected on what my life would’ve been if not for Doc Mainieri.”

The Mainieri championship legacy – from Demie to Paul – is impressive in its own right and downright incredible when considering how it all came about.

Demie’s father immigrated to the United States, alone, arriving as a teenager with just 18 cents in his pocket. He settled in New Jersey, where he met and married the woman who went on to become Demie’s mother. Her parents were also from Italy.

The youngest of the couple’s 11 children, Demie played baseball at West Virginia, and he earned master’s and doctorate’s degrees from Columbia, which is how he got his “Doc” nickname.

After college, Mainieri was drafted into the U.S. Army during the Korean War. After boot camp, roughly 700 soldiers stood on the tarmac, waiting for their assignments.

Nearly all of them went to the front lines, and most of those died in combat. Mainieri was one of just seven soldiers who were instead sent to Europe, a non-combat mission.

“Dad felt God allowed him to survive so that he could do good works for society,” Paul said. “That had a major effect on him.”

While in the military, Demie was asked by an army general to coach football and baseball teams against other bases. Eventually he left the military and was hired by Jack Netcher as Dade North’s baseball coach in August of 1960.

Mainieri’s first team went 14-8. Dade North didn’t have its own field yet, and the Falcons practiced at a local high school.

Skip Bertman, who won five national titles at LSU but prior to that was a prominent assistant coach with the Miami Hurricanes under Ron Fraser, called Paul Mainieri as soon as he got the news on Demie.

Paul said his father was offered the LSU job long before Paul took it but turned it down because it didn’t pay much back in those days, and Demie had a family to raise.

Bertman’s point about being a pioneer is accurate. When Mainieri won his national title in 1964, there were no pro teams in the city. The Dolphins, Heat, Marlins and Panthers didn’t exist, and it would be nearly two decades before the Miami Hurricanes would win their first national title in football.

That 1964 championship season was a difficult one off the field – Demie lost both his parents that year.

On the field, those Falcons rolled. In the state final, Dade North beat Gulf Coast and its star pitcher, Don Sutton, 3-2. Sutton reached the majors two years later and went on to win 324 games.

“Sutton was throwing 95-mph fastballs and curveballs that fell off the table against us,” said Steve Polisar, who played shortstop for Dade North that year. “After we beat him, he said: ‘You guys are the best club I’ve ever faced’.”

Dade North then went from Miami to Colorado – on a 15-year-old Greyhound bus with a busted bathroom – for the Junior College World Series, winning the final 19-5.

Winning that title was a great accomplishment for Mainieri, but he was also a champion on issues that went beyond baseball, such as equality.

As Dade North’s athletics director, Mainieri hired as his assistant Carrie Meek – who went on to become the first black member of Congress from Florida since Reconstruction.

“He did that against his administration’s wishes,” Paul Mainieri said. “My father made it a point to teach all his children never to judge people by what they look like.” 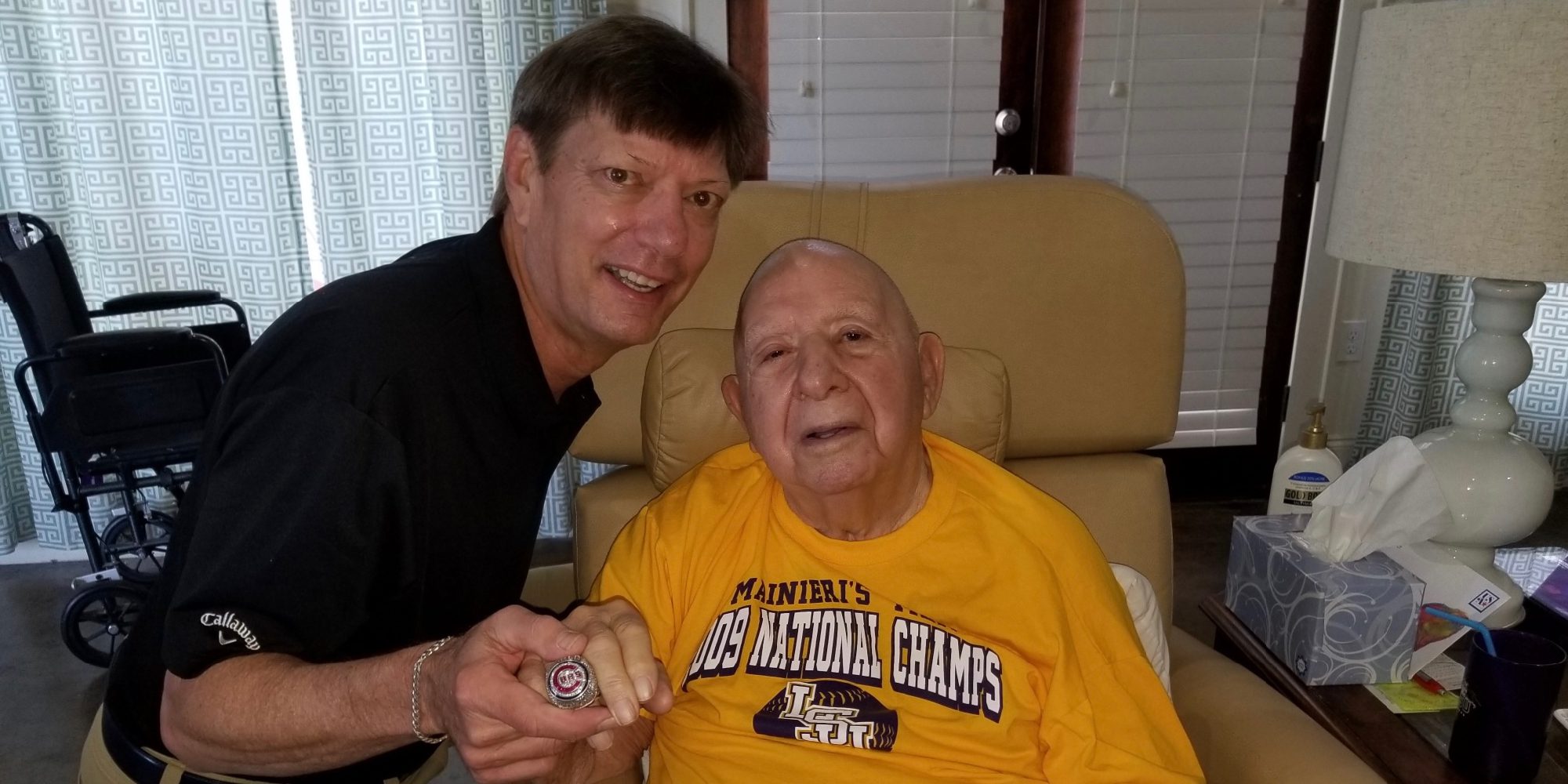 Nick Belmonte, who works as a college baseball analyst on the SEC Network and also earned a World Series ring because he serves as a Chicago Cubs scout, played for Mainieri in 1974-75.

But maybe none of that success would’ve happened if Belmonte had taken “no” for an answer.

In 1973, Belmonte had what he admitted was a “terrible” fall camp for Dade North.

“I was overwhelmed by sliders,” Belmonte said. “I hadn’t seen that pitch in high school.”

It was so bad that Mainieri – whose doctorate was in Psychology — called Belmonte into his office.

“He said, ‘Nick, we have a lot of outfielders on this club. If it’s all right with you, I will make calls to Biscayne College (an NAIA school) on your behalf.”

Belmonte pleaded his case, telling Mainieri he could play at this level if just given a chance. Mainieri, though, stuck to his guns and told Belmonte to consider his offer.

As Belmonte walked out of the office, he had one thought.

Belmonte, who lost his own father to cancer when he was 14, went home, talked to his mother and decided to return to practice the next day as if that conversation with Mainieri had never happened.

The next day at practice, Belmonte ran out to center field, hoping to be invisible. Mainieri saw him, of course, and said: “Remember that conversation we had yesterday?”

After a couple of seconds of awkward silence, Mainieri said: “Don’t worry. You’re going to be fine.”

Belmonte went on to hit .374 that season, starting on a Dade North team that went back to the Junior College World Series once again.

“I think he was testing me to see if I was one of those guys who would get his feelings hurt,” said Belmonte, who later set a Florida Gators single-season steals record of 42, a mark that still stands.

“Doc taught us that you can’t play the game with one foot in the dugout. In other words, you have to be all in and you can’t fear anything.