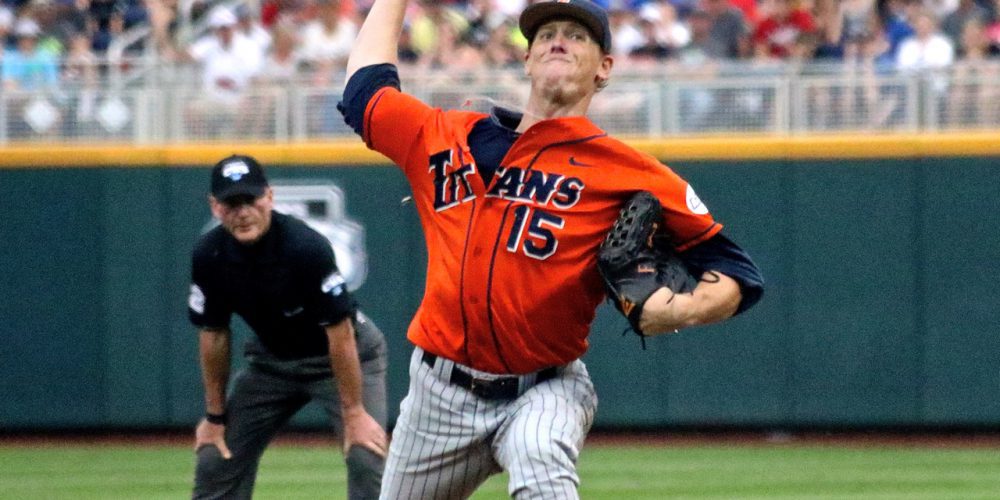 Editor’s Note: The COVID-19 crisis has resulted in the cancellation of the 2020 college baseball season, so we’re digging through our archives and re-posting some of the best work of D1Baseball’s first five years, highlighting some of college baseball’s biggest stars and most compelling storylines. Today, we present Michael Baumann’s colorful 2015 homage to the unparalleled master of control, Cal State Fullerton great Thomas Eshelman.

BLOOMINGTON, Ind. — After two years of experiencing Cal State Fullerton righthander Thomas Eshelman through box scores, Twitter updates and grainy online streams, I got to see him in person. And instead of excitement and anticipation — or even the mythical, Zenlike state of Journalistic Objectivity you’re taught to strive for — I felt a new emotion: overwhelming anxiety. Even though I had absolutely no personal stake in who won, and even though I wasn’t even really at Fullerton’s series against Indiana to write about Eshelman specifically, I was freaking out inside as I drove to the ballpark and found the press box.

I wasn’t nervous because Eshelman was so great, even though since the moment he first stepped onto a collegiate mound, the 6-foot-3 righthander has been among the best amateur pitchers in the world. He’s a veteran of USA Baseball’s Collegiate National Team, a two-time All-American, the first freshman to start on Opening Day for Fullerton since 1987. But I didn’t feel this way about seeing Mark Appel or Carson Fulmer, or even Roy Halladay, for the first time.

It’s because of the manner in which he’s so great. Eshelman is probably the best control pitcher in the history of the college game. As a freshman, he struck out 83 batters against just three walks, though since then his career K/BB ratio has dropped all the way to an even 16. He’s been consistently dominant, pitching more and better innings than just about anyone in college baseball over the past three years, and he’s done it without top-notch velocity or a knockout breaking pitch.

“This is the best command I’ve been around in my 15 years of coaching,” said Fullerton pitching coach Jason Dietrich. “I’ve never been around a guy who’s walked (15) guys in almost 300 innings. Once every 15 years you get a kid like this.” …