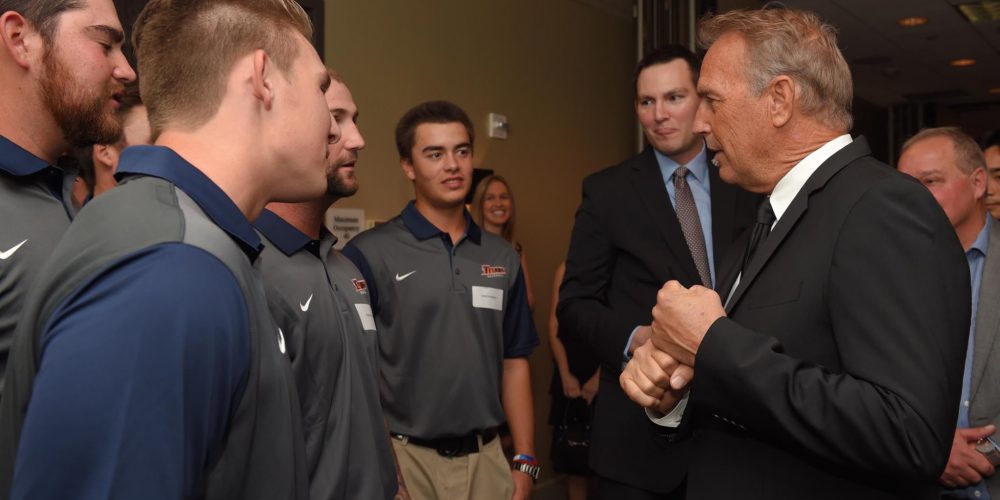 Goodwin Is Costner’s Field Of Dreams

FULLERTON, Calif. — Some people are just born at the right time.

Kings. Queens. Presidents. Billionaires. Movie stars. Professional athletes. Even evil dictators and ruthless war lords have to feel fortunate to be born when they were.

In our popular culture I can think of nobody who was born at a more perfect time than Academy Award-winning actor/director Kevin Costner. And no, not because the Hollywood idol has won two Oscars and three Golden Globes during his years of great filmmaking and distinguished acting, but because he has had a front row seat in seeing his alma mater, Cal State Fullerton, build a national power in baseball, a sport you might have noticed he does have a small affinity for.

Costner first attended the Orange County school back in 1973, the same year that the Titan baseball program was taken over by a guy named Augie Garrido. Costner tried out for the team at the time but did not make the squad. Still, he has followed the Titans closely ever since, even making a number of appearances in Omaha when Fullerton has made the College World Series field of eight.

Costner has been closely in tune with the Titans since they begin playing Division I baseball in 1974. He has also seen them win a national championship in each decade since then with titles in 1979, 1984, 1995 and 2004.

Yes, worry not, they’re working on one for the Two-thousand-teens too.

On January 29th, Costner was given the honor of headlining the Dinner with the Titans event at the Irvine Marriott, the baseball program’s yearly fundraiser. This was the same event in which Garrido was the keynote speaker last year.

For his turn at the podium Costner was funny, entertaining and even a little wistful at times during his speech. He wove in stories about his life in movies and his love for baseball, while also doling out advice to the current players to be thankful of their opportunity to play collegiate baseball. Guys in his era were going off to fight in the Vietnam War while he was safely tucked away and going to college. Of course the true colors of his Titan fandom were on full display as he addressed the crowd of 750 people that night. 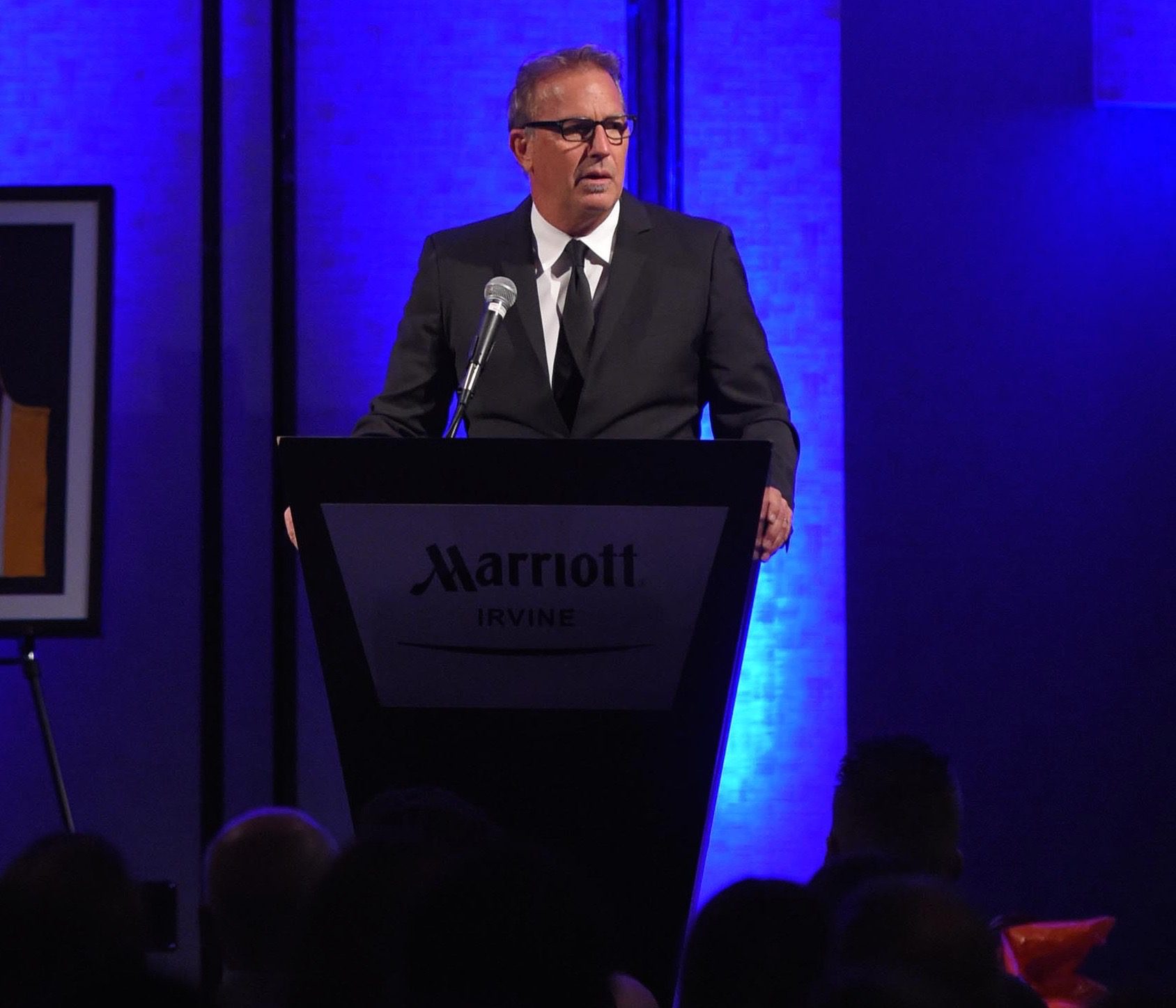 “What was built here by Augie Garrido, George Horton, Dave Serrano and now Rick Vanderhook is so important to me,” Costner said. “To pretend otherwise would be the worst kind of betrayal to any player who was ever good enough to wear the Titan jersey.”

Costner lamented the fact that he never got to be a Titan player himself. He tried out early in his college career but never made the cut. But he has kept a close association with the baseball program since his college days. Yes, even before he got famous he was always a fan. What brought him so close to the program? He says flatly, “It was Augie.”

The legendary coach and acclaimed actor started up a friendship in the late 1980s when “Bull Durham” and “Field of Dreams” were all the rage, and that friendship forges on to this day. When Augie moved on to Texas, George Horton continued to welcome Costner to be a part of the Titans.

“Augie made me feel important, like I was a part of the team,” Costner said. “That’s also why I think so much of George Horton. He could have easily just let this magical bond and tradition go and let this relationship be Augie’s thing and moved on.”

Serrano and Vanderhook did the same in welcoming in the noted celebrity and letting him take infield with the team and hit batting practice as he did at the alumni game the day after his speech at the Titan dinner.

“All across the country I am asked to work out with major league baseball teams and I continue to be flattered by that,” Costner said. “I never say yes just because some front office people want me to be out there. It’s not a photo op for me. The game and the players mean too much to me for me to think that being a celebrity gives me some sort of pass that allows me to step on their field. I only consider doing it when it comes from the coaches and the players.”

It’s hard to imagine a Hollywood actor who is more intertwined with the sport of baseball than Costner. He has been in five baseball-themed movies altogether, starting with the little known “Chasing Dreams” in 1984 and then moving on to blockbusters like “Bull Durham,” “Field of Dreams” and “For Love of the Game.” He also played an ex-ballplayer in 2005’s “The Upside of Anger.”

You have to wonder how many times Costner is at a ballgame or a stadium somewhere and a fan asks for an autograph fully expecting it to come back signed by Crash Davis?

Back in 1999, that bond between actor and baseball fan came closer than ever for Kevin. When the Titans were asked to play an exhibition game against the Anaheim Angels, Costner suited up for the blue and orange. Horton inserted him at shortstop, where he played almost the entire game and reveled in some of the cheers he heard that day.

“I managed to make a few plays,” Costner recalls. “I think I even took a ball in the hole that I had to backhand.”

He also explained that he dropped a fly ball that essentially cost the Titans the game and got to hear the 20,000 fans in attendance that day boo him. But knowing Costner, that yin and yang of euphoria and heartbreak is something he loved living through that day. Hero one minute. Goat the next. That’s baseball. That’s the theme that has resonated through every one of his baseball films as well. 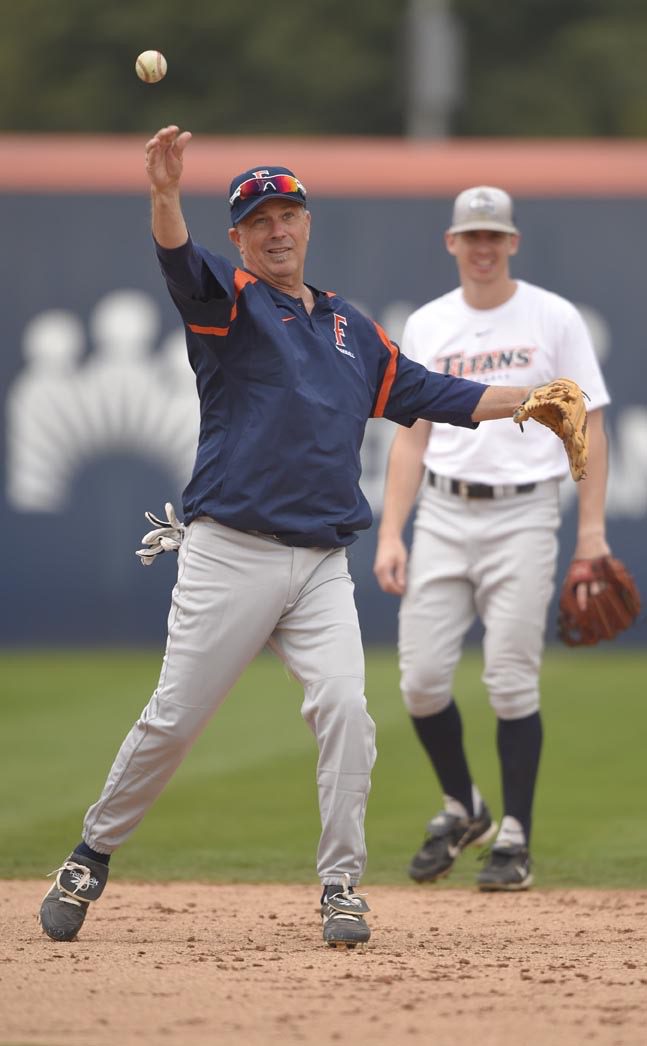 One of his most memorable moments of Titan baseball, Costner relayed to the crowd, was the emotional tug he felt at the 2004 national championship game, which saw his alma mater take on Augie Garrido and the Texas Longhorns.

“Baseball can be cruel,” Costner said. “And that day would be the greatest example because I knew one of my friends’ heart would be on the ground in the end.”

The Titans ended up beating Texas in two straight games to win their fourth national title as a program. Augie was denied his fifth title as a coach. Costner relayed that he was happy for his school to beat another one of those big-money programs and take home a national title. But he also secretly worried about the friendship between Garrido and Horton.

Three months later, Costner got married at his ranch in Colorado, where he built a baseball field with lights. If you build it, they will come, right? Well that’s what happened. Both Garrido and Horton showed up that day out of respect for Kevin and Christine. Costner was nervous about getting the two of them together just 90 days after they faced each other in pursuit of the national championship. He even went so far as to wonder if the two competitors would talk.

“Three hours before we were married we had an epic baseball game at 9,000 feet,” Costner said. “Augie and George made their way over to left field. They were standing, talking and watching the game together. They were far enough away to know that no one would know what was said between them. And I never asked. But magic happened that day in left field and the Fullerton family became one again.”

Costner still makes it by Goodwin Field to see his favorite team play from time to time. And he’s not a passive fan either. In 2005, when the Titans were playing in the super regional against Arizona State, they were trailing late in the game. In between innings, Costner stood up in the walkway behind home plate and started yelling at the Titan fans to get on their feet and get behind their team.

“If we’re going to go to Omaha, you guys are going to need to get behind them and make some noise,” he told the crowd that day. “They can’t do it alone.”

It worked in one sense, the crowd reacted. Boldly. But ultimately it didn’t work out for the Titans, who fell 9-8 in a stunning upset.

Costner still regrets not being able to play for Cal State Fullerton when he was a student there in the mid-70s. He even went so far as to say he is “embarrassed” that he couldn’t have donned the Titan pinstripes. He says that whenever he is on a major league field, pro players come up to him and ask about playing baseball for the Titans. He said the first thing he feels is pride that baseball players everywhere know the Cal State Fullerton brand. That little commuter college built out of an orange grove along the 57 freeway has come a long way. Costner says it is now a baseball school and he takes great pride in what the coaches have done over the decades to keep the Titans a national power in our sport.

The second thing he feels is shame in not being a Titan player.

“Every time a major league player asks if I played for Fullerton I have to say, ‘No, I never did.’” Costner said. “But then I casually remind them that I did pitch a perfect game at Yankee Stadium and I’ve also been in a bathtub with Susan Sarandon.”