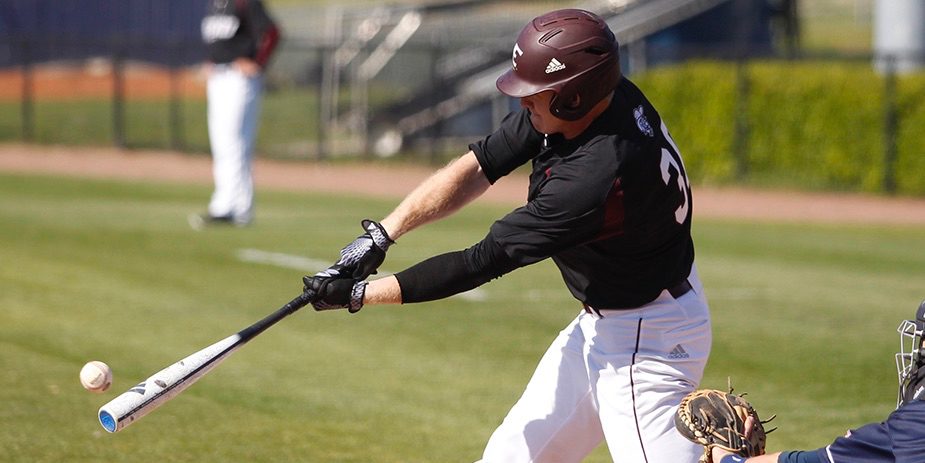 RICHMOND, Ky. — On a recent Thursday afternoon, the most unlikely breakout star in college baseball sits in room 125 of Alumni Coliseum, home of the Eastern Kentucky University basketball team since 1963, and weighs a difficult question: Where should he attend physical therapy school?

Ben Fisher is the 2016 recipient of the Ohio Valley Conference Scholar-Athlete Award, the highest honor an athlete in the conference can receive. He had a 4.0 grade point average as a biology major until last semester, when he made a B in vertebrate physiology. “The hardest class I’ve ever taken,” he said.

Fisher also happens to lead Division I in home runs, RBIs, runs, slugging percentage and total bases. He’s hitting a ridiculous .412/.500/.895 through 29 games, which means physical therapy school might be put on hold.

His rise from career .284 hitter through his first three seasons with the Colonels to Golden Spikes Award consideration would’ve been hard to predict. Fisher, a three-year starter, already has more home runs (15) this season than he had for his career (13) when he entered his senior year. In his opinion, Fisher has never even been the best player on his team. He grew up in Richmond and went to high school less than five miles from EKU’s campus. Three of his teammates at Madison Central High School played Division I baseball.

“I feel like I’ve been in a lot of places where, growing up, I wasn’t always the best player on my team,” Fisher said. “Definitely not in high school because we were surrounded by a lot of talented guys. Then last year with guys like Kyle (Nowlin) and Mandy (Alvarez), I don’t want to say I’ve been overlooked, but I really hadn’t thought about my abilities and how it projects out.”

How his talent projects has never been a question to Edwin Thompson, the second-year head coach at EKU. Thompson points to Fisher’s power from the left side of the plate along with the fact he strikes out less than he walks as reasons Fisher will play at the next level.

“I definitely think he’s a pro,” Thompson said. “There’s no doubt. He’s one of the best first basemen, in my opinion, in the country. He plays good defense. I think any scout that sees him play likes that. I think he’ll have a chance to play for a while as long as he wants to.”

Fisher’s transformation to an elite hitter started toward the end of last season. Thompson said Fisher had around 40 strikeouts at the halfway point last season because he was swinging at bad pitches.

“He used to swing at first-pitch offspeed pitches in the dirt,” Thompson said. “They could just throw it and he’d swing at it.”

Thompson made Fisher take more pitches, which led to better hitting counts. Fisher took that approach to the Northwoods League this past summer, when he logged more than 250 at-bats against quality pitching. When he returned to Richmond for his senior season, Fisher had more confidence and took an aggressive mentality at the plate.

“We started out in Arizona this year, which was a huge venue to compete at,” Fisher said. “I just took a really competitive mindset into those games.”

“They were shifting him,” Thompson said. “Left-center was open and he hit a double in the gap. That’s who he is. He’s been able to take better swings at pitches and get in better counts. He’s just done a really good job of not giving at-bats away.”

Fisher decided on a PT school late Thursday night. He chose the University of Kentucky, a school just 25 miles north of Richmond. Many of his friends and the church he attends reside in Lexington. But whether Fisher ends up in Lexington this fall remains to be seen. Playing baseball at the next level is Fisher’s top choice, but he said he’ll make those decisions when the time comes.

“It’s been a dream since I was a kid to play professionally,” Fisher said. “It’s still a dream of mine. It’s not something that’s gone away. I think with my academic success and having the opportunity to go to PT school has really made me be able to just relax and play the game like I played it when I was a kid.”