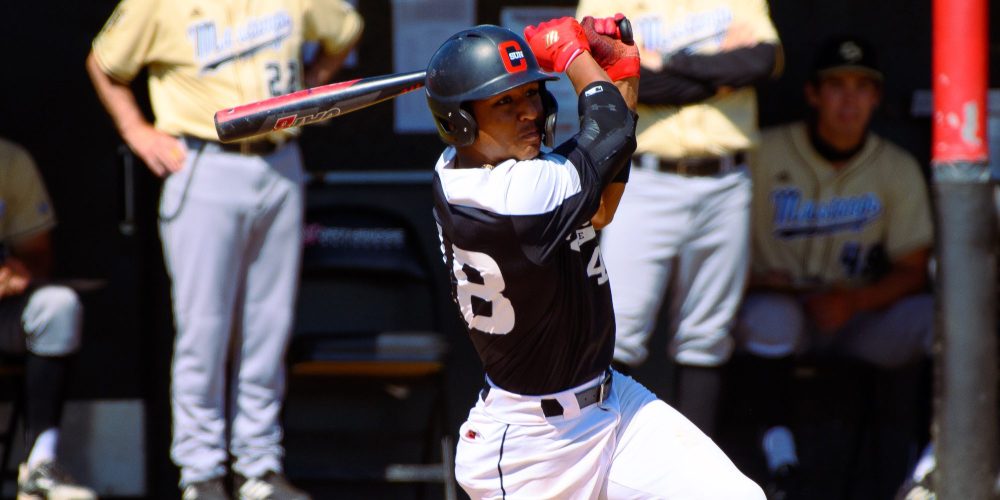 Kai Moody Grinds His Way From Japan To Stardom At CSUN

When Kai Moody was an elementary-school kid playing baseball in Japan, he adhered to a tradition:

If your uniform isn’t dirty after practice, dive into the mud.

“You don’t want to be the only one with a clean jersey at the end of the day,” Moody said.

One decade-plus later, Moody still loves getting dirty, especially if the result is a double, a steal or a diving catch.

Defensively, Moody primarily played second base and left field last year. But when he was needed for three games at first base, he did that, too, despite never having played that position previously.

Dave Serrano, who announced last month that this will be his last year as Matadors coach, raves about Moody.

“I’ve told scouts that Kai probably doesn’t grade out at what you’re looking for, but all he does is put up numbers and play winning baseball,” Serrano said. “Guys like him climb ladders, and I won’t be surprised to see him in the major leagues for a long time.

“The last guy I said that about was Justin Turner when I was one of his coaches at Cal State Fullerton.”

That’s high praise – Turner has turned himself into a two-time All-Star, an NLCS MVP and a World Series champion.

Moody was so versatile last year that he kept three gloves in his bag – one for first base, one for second base and one for the outfield.

Despite all that moving around, Moody made just five errors last season – two at second, two in left and one in right.

Moody this year figures to be more stable in his assignments – three-hole hitter and center fielder.

Serrano said Moody was a revelation in his brief two-game run in center last year.

“He made two catches against UC Santa Barbara that reminded me of Ken Griffey,” Serrano said in amazement. “It may not look natural all the time, but Kai’s our best athlete.”

Serrano expects Moody – who is a fifth-year senior – to get drafted this summer, from rounds 16 to 20.

If so, it would be quite an accomplishment for a young man who hasn’t had an easy path to success.

Moody, who is fluent in Japanese as well as English, embraces both cultures. His father, Donnell, is a Black American. His mother, Yuriko, was born and raised in Tokyo.

Born in San Francisco, Moody went to school in Tokyo from kindergarten to the fifth grade. He played baseball there, too, and it was a different experience.

“I was 6 years old, and we were practicing six hours a day,” Moody said. “You would get one water break after three hours.”

Respect is a big part of the way Moody was taught baseball in Japan.

Upon arrival to practice, players take their caps off and bow to the field. When a coach speaks, players, again, remove their caps and pay close attention.

Moody’s mom did not allow him to chew gum during games.

Again, respect for the sport is paramount in Japan.

“His mentality was hard core and intense,” Kai Moody said of his dad. “I didn’t like it when I was young. But now I give him credit.”

Moody said his life wasn’t easy as a kid. The family moved around a lot, searching for a better financial situation.

“I was too young to understand at that time,” Moody said, “but we were struggling.”

Moody, though, is clearly not afraid of hard work.

During high school, he lived in Bayview Heights, near now-demolished Candlestick Park.

To get to San Francisco’s George Washington High, Moody woke up at 5:30 a.m., made himself breakfast, packed his lunch, walked to the bus stop by 6:09 and took a 70-minute ride to arrive at his destination.

Then came school and baseball practice and another long bus ride that got him home by 7:30 p.m.

Despite all that hard work and four straight all-city seasons, Moody failed to pick up any scholarship offers.

He ended up at a juco – Cabrillo College – located 79 miles south of his high school. Moody played shortstop for Cabrillo, hitting a combined .338 and earning all-conference honors both years.

The worlds of Moody and Serrano collided in the summer of 2019. Serrano had been hired by the Matadors in July of that year.

“In the six weeks between coaching staffs, we lost a lot of recruits,” Serrano said. “There was a lot of confusion and disarray.”

Fortunately for the Matadors, one of Serrano’s assistants at that time — Neil Walton, who is now at Cal State Fullerton – had a contact at Cabrillo College, who recommended Moody.

The Matadors brought Moody in as a preferred walk-on. As a Matadors junior, Moody wasn’t very impressive, hitting .180 in 15 games before the pandemic cancelled the season. Moody said he had quite a few line-outs that year.

Then, last year, Moody had his breakthrough. He hit .483 in the first month of the pandemic-shortened season (March) and followed that by hitting .348 in April and .405 in May.

“He’s the guy you want up in tough situations,” Walton said. “He’s an overachiever. He deserves a shot to play pro ball. He’s awesome, man.”

Serrano said he believes Moody – who didn’t get a scholarship until this past fall – is an inspiration to his teammates. Much of what Moody has accomplished, Serrano said, can be attributed to his humble background.

“He doesn’t come from much,” Serrano said of Moody. “But a lot kids from that background usually have a good work ethic, and that’s the case with Kai.

“I’ve never been around a more passionate player. He never thinks he should fail. He gives a full effort all the time.

“If you ask anyone on our team, he’s our leader. I haven’t done this often in my career, but I’ve told Kai, ‘This is your team.’ I want more of our guys to be like him.”