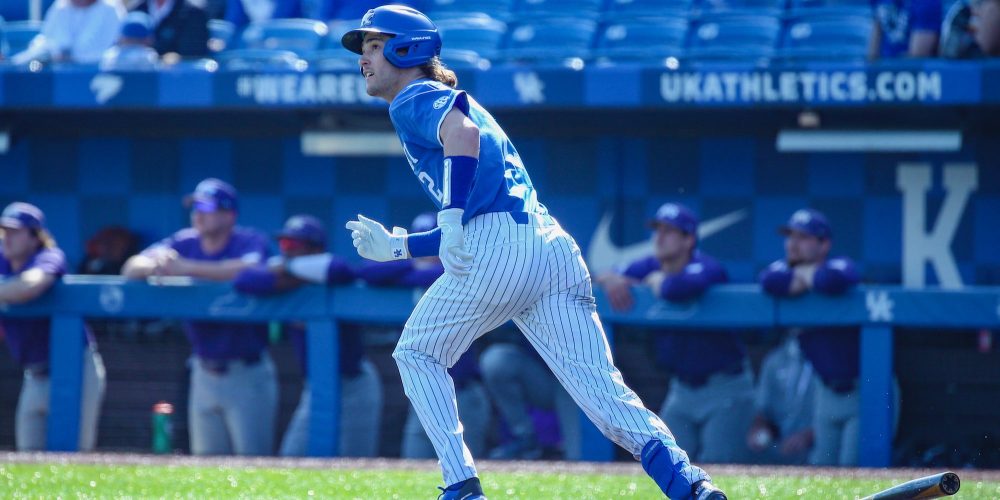 On the night of Dec. 10, the Felker family prayed that the awful noise outside – a killer tornado with winds topping out at 190 mph – would have mercy on their lives.

Jason and Maria Felker and their daughter Allie huddled in their basement in Princeton (Ky.), a tiny town with 6,270 residents as of the most recent census. Jason and Maria’s son, Kentucky Wildcats infielder/outfielder Jase Felker, was on campus that night, some three hours away.

“When the storm got close, we took shelter in our (windowless) basement,” Jason Felker said. “We had our phones, a radio and a flashlight, but we lost power before the storm hit.

“Then we heard the roar.”

It was dark and terrifying, but the Felker family was spared.

Others were not nearly as fortunate.

In a span of 24 hours, a string of 71 tornadoes killed 89 people and left 667 injured. Damages to homes and other buildings totaled $3.9 billion, and Western Kentucky was hardest hit.

Just a mile away from the Felker family, homes were destroyed.

Because of the power outages, Jase Felker spent more than two hours without knowing if his family members were safe. He finally had one of his friends drive over to see Jason, Maria and Allie, reporting back that all was well with them at least.

The Felkers, though, were shaken up, understandably.

“Some people said it sounded like a train, and it was coming right at us,” Jason Felker said. “I’m 52 years old, and I’ve never experienced anything like that in my life.

“I hope I never experience that again. We were a half-mile from the edge of the storm.”

Indeed, of the 89 total deaths, 74 of them were in Kentucky, making this the deadliest December tornado event in U.S. history.

However, in the three-plus months following that awful night, the Kentucky community has rallied around the hardest-hit areas, including Princeton, which was nearly wiped off the map.

The University of Kentucky’s athletic department held a telethon for Princeton, raising $3 million.

“Our players and coaches signed up for time slots, and we fielded phone calls, getting donations through the Salvation Army,” Mingione said. “I got a call, for example, from an 80-year-old woman – a retired teacher – who wanted to donate.”

Jase Felker said he was “freaking out” with worry on Dec. 10, knowing that his family was in the path of the tornado.

Since then, Felker – a business major – has tried to focus on his studies and baseball.

In fact, he spent the past three years playing junior-college ball, blossoming in 2021 by hitting .410 with three triples, 10 homers, 55 RBIs and 18 steals in 20 attempts at Rend Lake (Ina, Illinois). Felker also had a .509 on-base percentage and a .736 slugging percentage.

“He’s a winning baseball player,” said Mingione, who is in his sixth season as Kentucky’s coach. “Jase can bunt, steal a base, make a great defensive play …

“The best thing about Jase is that he’s a hard worker. Doesn’t complain. Very serious. He does not open his mouth unless you ask him something.”

He’s a switch-hitter who can play second base, third base, left field or right field.

That versatility has been especially useful since Saturday March 26, when Wildcats second baseman Daniel Harris IV was hit on his helmet by a pitch. Harris passed the concussion tests, but Mingione held him out of the next day’s game against Georgia.

For that Sunday contest against the Bulldogs, Mingione filled out nine spots in his lineup card (including DH), telling those players they would start. However, Mingione left second base temporarily blank, opting to observe batting practice before making his decision.

Finally, just 10 minutes before game time, Mingione let Felker know he would be playing second base. It was only Felker’s sixth start in D1 baseball.

Felker’s parents found out their son was starting when the PA announcer said his name just moments before first pitch.

So how did Felker respond to the opportunity?

Batting seventh in the lineup, Felker went 5-for-6 with four singles, one double, two runs scored and one RBI in an 18-5 victory. He faced six different pitchers that day, raising his batting average from .348 to .448.

“My teammates were hyping me up,” Felker said of his big game. “I just kept winning each at-bat.”

Mingione said one of his players made a comment to him regarding Felker.

Said Mingione, quoting the player: “This is the stuff that pisses you off. Jase hasn’t played in a week, and he gets five hits in an SEC game. He’s making it look too easy.”

With that win, Kentucky took the series from Georgia, which had entered the weekend ranked 14th in the nation. It was Kentucky’s second series win over a top-15 team this season, and the 18 runs were the most by the Wildcats in an SEC game in five years.

As for Felker, his five hits were the most by a Kentucky player since Riley Mahan in 2017.

In the past decade, only three Wildcats have had at least five hits in a game. The third player on that list is big-leaguer JT Riddle, who had six in 2013.

Ironically, Mahan and Riddle are both lefty-swinging infielders drafted by Miami. In fact, Mahan is still in the Marlins’ minor-league chain.

Felker, meanwhile, followed his big game by going 2-for-3 with a walk and two runs scored while playing left field in a 6-3 loss to Eastern Kentucky on Tuesday.

That could make for a great country song …

from The Bluegrass State;

in the Bluegrass State.