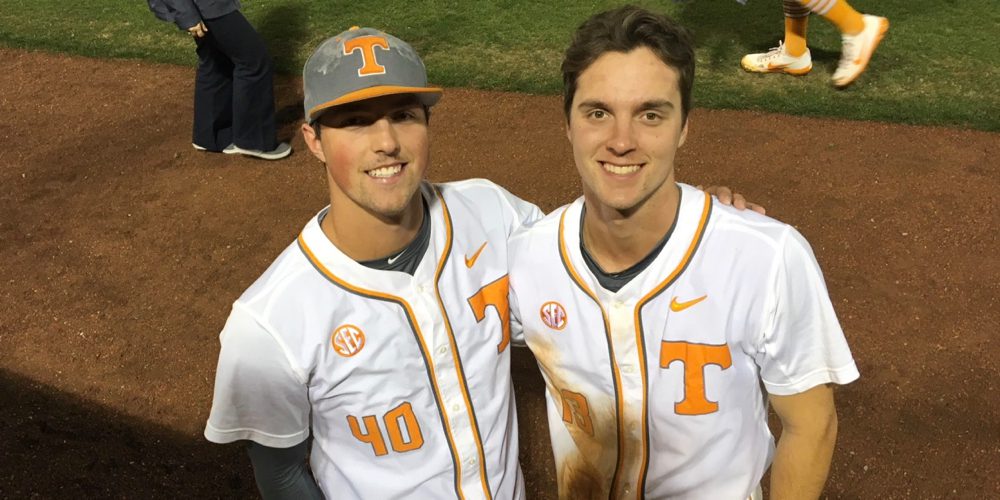 Tennessee starting first baseman Luc Lipcius was born in 1998, on May 22 at 10:21 a.m. One minute later, the Volunteers had their starting shortstop of the future, Andre Lipcius.

The Lipcius Boys, both sophomores, are believed to be the first set of twins to ever start for the Tennessee baseball program, and the Volunteers’ history dates all way back to 1897.

Their personalities are different, too. Andre carries himself as the older brother despite being born 60 seconds later.

“Luc likes to live life like he’s 12 years old,” Andre said. “He has fun with everything — riding go-karts or playing in the snow. I’m still outgoing, but I’m more mature.”

Added Luc: “I’m the passive one in the family. Andre is more outspoken.”

Both Luc and Andre played key roles in leading their high school team, Lafayette (Williamsburg, Va.), to the first state title in program history. This happened in 2015, their junior years.

In that Class 3A state final, Andre pitched a complete game, smacked three hits and drove in two runs for a 5-4 win over Loudoun Valley, which had been the reigning champs.

Luc was just as heroic, blasting a game-winning, solo homer to right with two outs in the top of the final inning, snapping a 4-4 tie. But Luc apparently got a bit carried away while rounding the bases.

“He got kicked out of the game because he threw his helmet (during the celebration of the home run),” Andre said of his brother. “We got through it, but we had to go out there for the bottom of the seventh without our starting center fielder.” 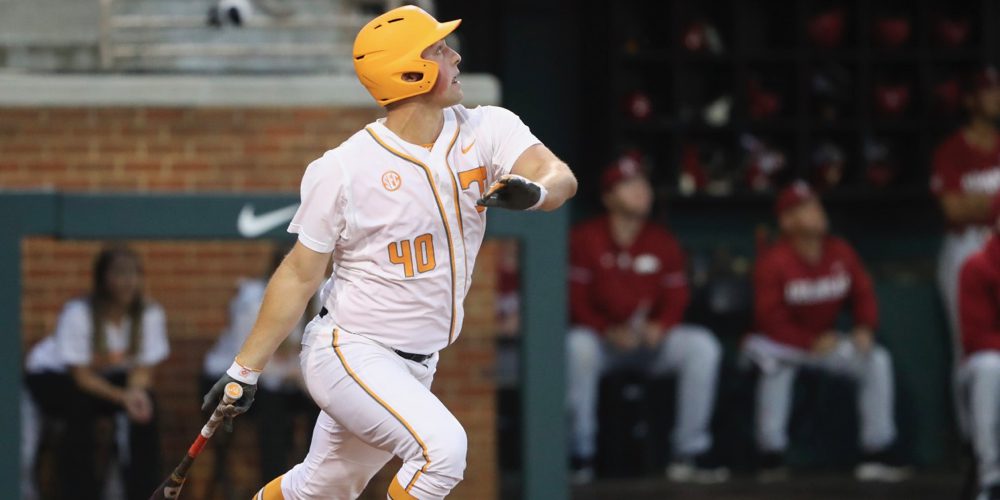 The Volunteers staff – led by head coach Tony Vitello and assistants Frank Anderson and Elander – would love to see more heroics, if not the over-the-top celebrations, from Andre and Luc this year.

Luc played in 33 games, including 20 starts, as a freshman, batting .256 with one homer and eight RBIs. He was used as a right fielder/designated hitter last season, and he had a huge fall season with seven homers.

“Luc is, pound for pound, probably the strongest guy in our program,” Elander said. “He’s in the gym all the time, blowing up weights. You know he’s in there because you hear some loud banging in our weight room.

“Power is what can separate him. He can hit them out on command in batting practice. He can spray balls to the ‘oppo’ gap with authority, and you couple that with his pull-side power … It’s just a matter of having a functional swing during games.”

Andre started each of Tennessee’s 52 games last season – all of them at first base – batting .275, with a team-best 11 doubles, two triples, one homer and 26 RBIs.

“He may not have the prettiest swing, but he finds the barrel,” Elander said. “Andre’s biggest adversary is his tendency to over-analyze. He’s aware of all the pieces of his swing. Sometimes he just needs to leave the mechanics in the batting cage and go compete.”

This season, both players switched positions. Andre moved to shortstop, a position he has played for most of his life, and Luc transitioned to first base. 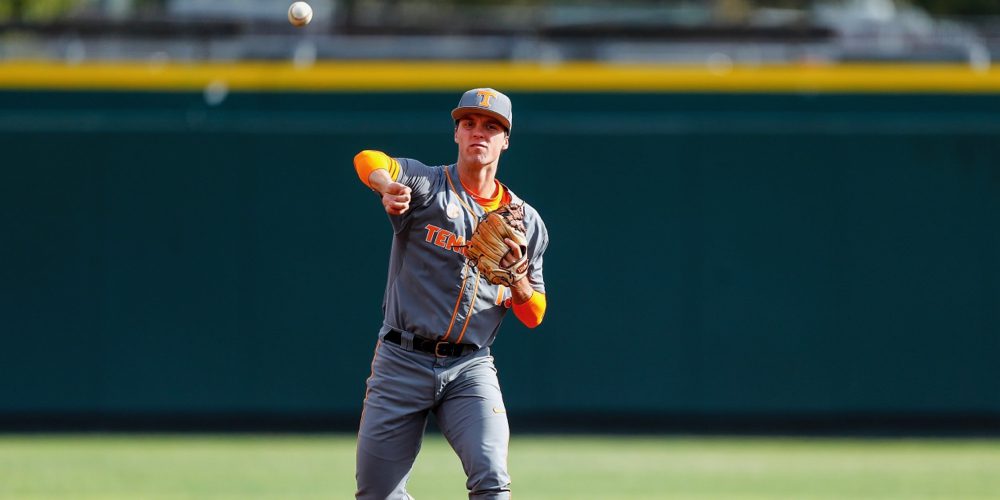 Andre and Luc are one of at least four sets of twins playing baseball in Division I this year. At Georgia, infielders Cole and Connor Tate are identical twins. Georgia Tech has twins Austin and Nick Wilhite. Austin is expected to start at shortstop, while Nick is a lefty pitcher and outfielder. Marist has twins Robbie, an infielder, and Reese Armitage (lefty pitcher and outfielder).

Fans may be seeing double on April 3 when there will be twins in both dugouts as Georgia Tech plays at Georgia. The same would be true April 27-29 as Tennessee visits Georgia.

Andre and Luc’s parents – mom Rochelle and dad Romuald – plan to be there for those Georgia-Tennessee games just as they traveled to every weekend Volunteers series last season.

Rochelle and Romuald are both marine scientists and professors at The College of William & Mary, and their sons are serious students majoring in nuclear engineering, which is not surprising given their parents’ backgrounds.

Andre said he and his brother are on track to becoming aerospace engineers, although there is a caveat.

“It depends on how baseball goes,” Andre mused. “Maybe (we) won’t have to work.”

There’s a lot to do before they can get to pro ball, of course. Andre, who is the early favorite to be Tennessee’s three-hole hitter this year, was the first one of the Lipcius brothers to commit to the Volunteers and their scholarship offer.

Luc then followed as a preferred walk-on, a tremendous value for the Volunteers, especially if he turns his BP power into a season full of extra-base hits.

Defensively, however, Luc said he can be too “stagnant” while fielding.

“My coaches tell me I have ‘Midwest speed,’” Luc said. “I’m trying to improve my footwork around the bag.”

Andre, who made the SEC’s All-Freshman team as well as some Freshman All-American lists, said he feels comfortable throwing to his brother at first.

And the reverse is also true.

“I think (Andre) has one of the strongest arms in our infield,” Luc said. “With Andre, you can pretty much count on him to throw you something right around your chest.

“But if he sails something or throws it in the dirt, I’ve told him, ‘Don’t worry. I got you.’ I have his back.”