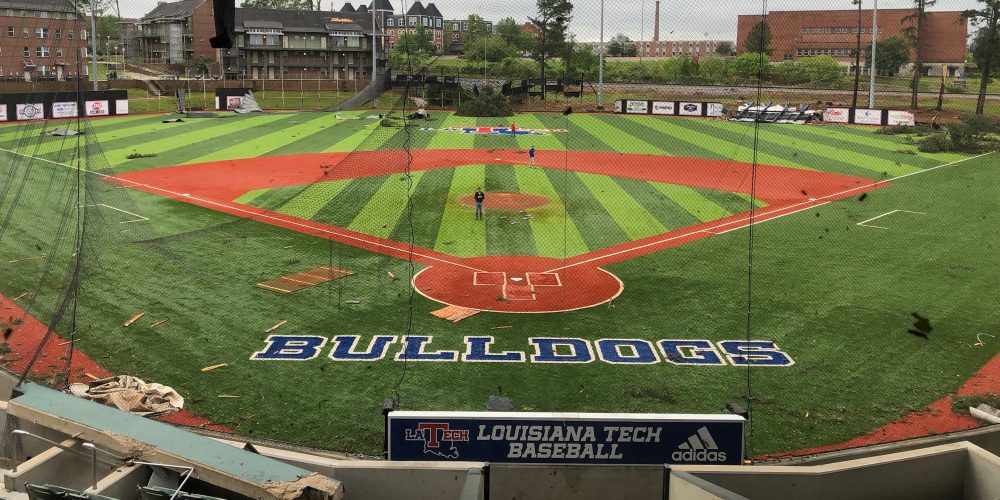 It was pitch black. The power had just gone out again on campus Sunday night when the Louisiana Tech baseball team returned home for the first time since a killer tornado ripped through Ruston, La., last week.

“Knowing what had happened to the town,” senior righthander Matt Miller said, “it was an eerie scene.”

The tornado, which struck Ruston at about 1:40 a.m. last Thursday, registered as EF-3, which means “severe damage” and winds between 135 to 165 mph. A mother and her 14-year-old son died when a large tree crashed through their home in Ruston.

Louisiana Tech students were much more fortunate as they escaped any fatalities. But the effects of the tornado still left many in tears as the baseball, softball, tennis and soccer fields were all demolished. It will take millions of dollars to rebuild.

J.C. Love Field – known affectionately as “The Love Shack” – is where the Bulldogs played baseball, and that stadium has been condemned. The scoreboard was knocked down, the outfield wall is gone, the turf suffered severe damage, and the grandstand collapsed.

It’s quite possible the Bulldogs won’t have a home field back until the 2021 season.

“You have to put things in perspective,” said Miller, an aspiring coach who is working on his Master’s degree in business administration. “Athletic facilities, houses and cars can be replaced — life cannot. Our hearts are with the family that lost a mother and a son.”

“We can play ball anywhere. I guess the silver lining is that when we rebuild, we will have the nicest facility in Conference USA.”

The Bulldogs’ three remaining home games – May 10-12 against Western Kentucky – will be played at UL Monroe, which is about 30 minutes away from Ruston. Practices will be held at Ruston High, which is 10 minutes away.

None of this has made focusing on baseball easier, and the Bulldogs (28-17) have lost five straight games, including four in a row since the tornado ravaged Ruston.

“We’re going through a tough time — not just the storm but baseball in general,” Miller said. “Things are not going our way.”

Indeed, all five losses during this skid – the longest of their season — have been by two runs or fewer.

The Bulldogs’ bad luck was epitomized during Saturday’s 4-2 loss at Rice. Louisiana Tech scored twice in the top of the ninth and had no outs and runners on first and second when a bunt was popped up near the mound, and Rice’s first baseman dove for the ball.

“It looked like he rolled over on the ball,” Miller said.

Bulldogs baserunners took off, but when the umpire ruled it a clean catch as opposed to a trap, the game ended with a gut-wrenching triple play.

There is still time to turn things around, however, and Miller knows what his team is capable of, pointing to a 10-game Bulldogs win streak earlier this season, from March 29 to April 13. Eight of those 10 wins were in league play, which bodes well for a possible feel-good run at the Conference USA tournament, which begin May 22 in Biloxi, Miss.

“Hopefully we can give our Ruston community something to be proud of,” Miller said. “We just have to stick together and find a way to do something special.”

Miller said he has some great memories of Tech’s field, where the B-52s pop song “Love Shack” rang out after every home win. That happened a lot in 2017, when the Bulldogs won 15 consecutive home games, including a 4-3 victory over Arkansas. It was the longest active streak in the nation at the time, and 3,129 fans turned out – the third-largest crowd in program history.

Miller also recalls a thrilling win later that season, beating Louisiana 6-5 with a walk-off single in the 13th inning.

Last Wednesday night, however, the Tech baseball team was on the road, losing 5-3 at McNeese State, which is located in Lake Charles, La. Rather than take the four-hour bus ride back home, the Bulldogs spent the night in Lake Charles before heading to Houston the following day for the weekend series against Rice.

That was a fortunate thing.

Had the team traveled back to Ruston that night, they may have been caught up in the tornado.

“Me and our bus driver did the math,” Burroughs said. “We would’ve been arriving back to campus right about when the storm hit. We are blessed. It could’ve been really bad.”

It was also fortuitous that the dorm rooms that sit right behind the baseball field suffered no damage other than a few broken windows.

Burroughs first heard about the storm at about 2 a.m. last Thursday, when he was woken up with calls from Ruston, alerting him to the damage. Burroughs then sent a group text to his players at about 2:30 a.m., and Miller said he only got about a half-hour of sleep the rest of the night. He called his friends back on campus to make sure everyone was OK, and, in short order, video of the damage had been posted on social media.

At 7:30 that morning, there was a team meeting, and Burroughs said a prayer.

“Everyone was in shock,” Miller said. “You don’t expect something like that to happen.”

While the Bulldogs tried to focus on that weekend’s series against Rice, Louisiana Tech students, faculty and coaches rallied together.

Junior infielder Grant Jones, who was not on the travel roster, proved to be a tremendous teammate. He salvaged valuables from the cars of many of his teammates whose vehicles had suffered broken windows and had been left exposed.

When the rest of the Bulldogs returned to campus on Monday, many of the players worked with a team chaplain to help out some of the people in the Ruston community who had suffered significant damage to their homes.

The storm brought back awful memories to a pair of Louisiana Tech assistant coaches – Travis Creel and Austin Knight – who were young kids when their families lost their homes in 2005 due to the devastation caused by Hurricane Katrina in the New Orleans area.

“The pictures don’t do it justice until you see it,” Burroughs said when asked about arriving back on campus late Sunday night. “The great thing was that our entire administration was there waiting for us when we got off the bus.

“We had a rough week. We lost four games and our stadium, and yet here was our administration hugging all of us.”

Burroughs has already fielded numerous calls from alumni and fans who want the new stadium to go up in the same exact spot.

The Love Shack was one of the coolest spots in college baseball, Burroughs said, with trains passing four or five times per game just beyond the outfield fence. There are also those dorms, where students would watch the games from couches on their balconies.

“It was such a neat little place with so much character,” Burroughs said. “It was pretty emotional to see it go. A lot of people would hate to see it moved, and it shows the passion of our fans.

“I haven’t given it too much thought. I just want what’s best for our school.”

Miller, who hopes to be a graduate assistant coach for Tech next season, is hopeful for the future.

“The Love Shack was our second home,” Miller said. “To have something that you hold so dear taken away really hurts. But I believe we will build something bigger and better.”