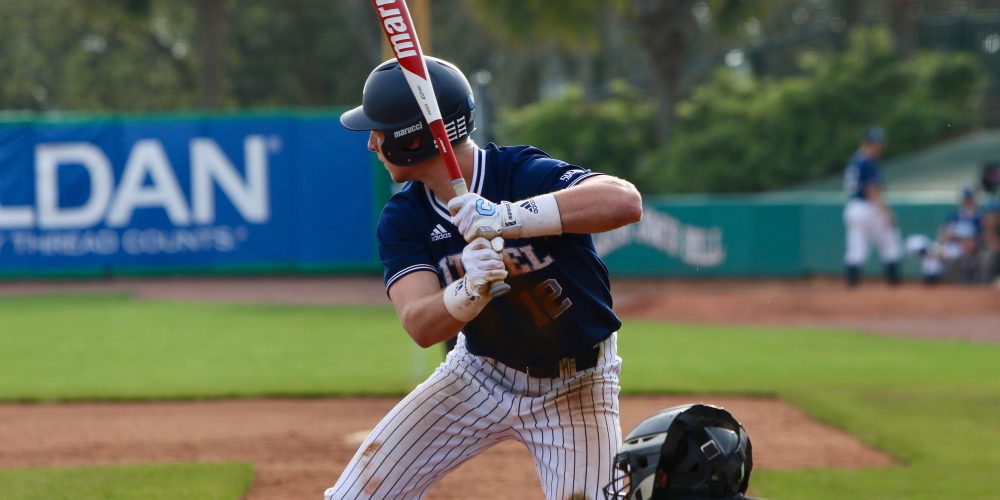 This is a story of connectivity … nearly three decades apart.

In June of 2017, shortly after Tony Skole was hired as The Citadel’s coach, he fielded several congratulatory phone calls from scouts in Georgia, who all gave him the same intel.

“The best player on The Citadel campus is not on your baseball roster,” they said. “He’s a football player.”

Skole was clearly motivated, too, as he made sure to introduce himself to McCarthy, asking him if he were interested in doubling up and playing baseball, something he did quite well in high school.

McCarthy said yes, Thompson gave his blessing, and the Bulldogs – eventually – had their starting right fielder and three-hole hitter.

Through a month of play, McCarthy, now a sophomore, ranks second on the team in batting (.352) and first in RBIs (14). He is vastly improved from his freshman season, when he started 39 games and hit .262.

Thompson said he preaches teamwork to his players, and he felt the best way to set a proper example is to cooperate with his fellow coaches, such as Skole.

Even so, McCarthy’s versatility came as a shock to the football coach. 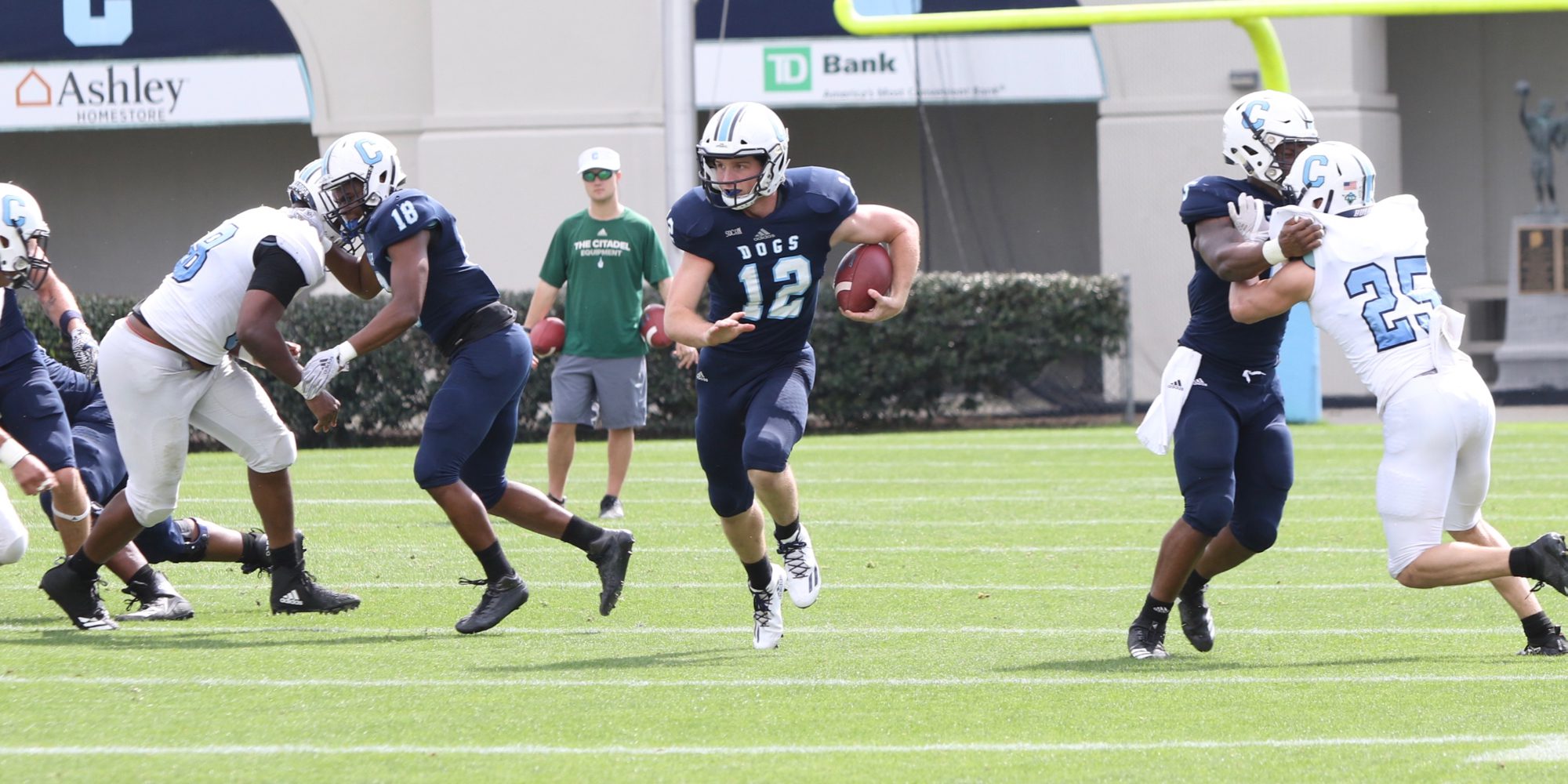 The Citadel’s Ryan McCarthy on the gridiron (The Citadel Athletics)

“I had no idea what kind of baseball player Ryan was until after he signed with us,” Thompson said. “He never mentioned it to me.

“All I know is that (for football) he makes ridiculous catches – one-handed catches. Maybe it’s from tracking fly balls as an outfielder. And he’s taller than most cornerbacks.”

McCarthy’s transition every spring from football to baseball has been helped by Skole, who played both sports at The Citadel from 1987 to 1991. But more on Skole’s experience as an athlete later in this story.

Two Are Better Than One

But this past November, Botkin showed up at the baseball offices with McCarthy, who just happens to be his roommate. Botkin talked to Skole, and a tryout – once again with Thompson’s blessing – was arranged.

Botkin not only made the club … he also won the starting job in left field.

“(The football-baseball arrangement) worked out so well last season, I was receptive to letting Lane do it this year,” Thompson said. “(Skole) and I communicate about what days Ryan and Lane are off, when they lift weights and when they practice. Sometimes I call (Skole) to plan out their weeks.”

Botkin, who was a backup safety and a starting punt returner this past football season, was switched to cornerback this spring and was elevated to starter status.

His successful spring in football actually cleared the way for baseball.

“Coach Skole told me that, ‘Before I can be a dude over here (in baseball), you have to be a dude in football.” 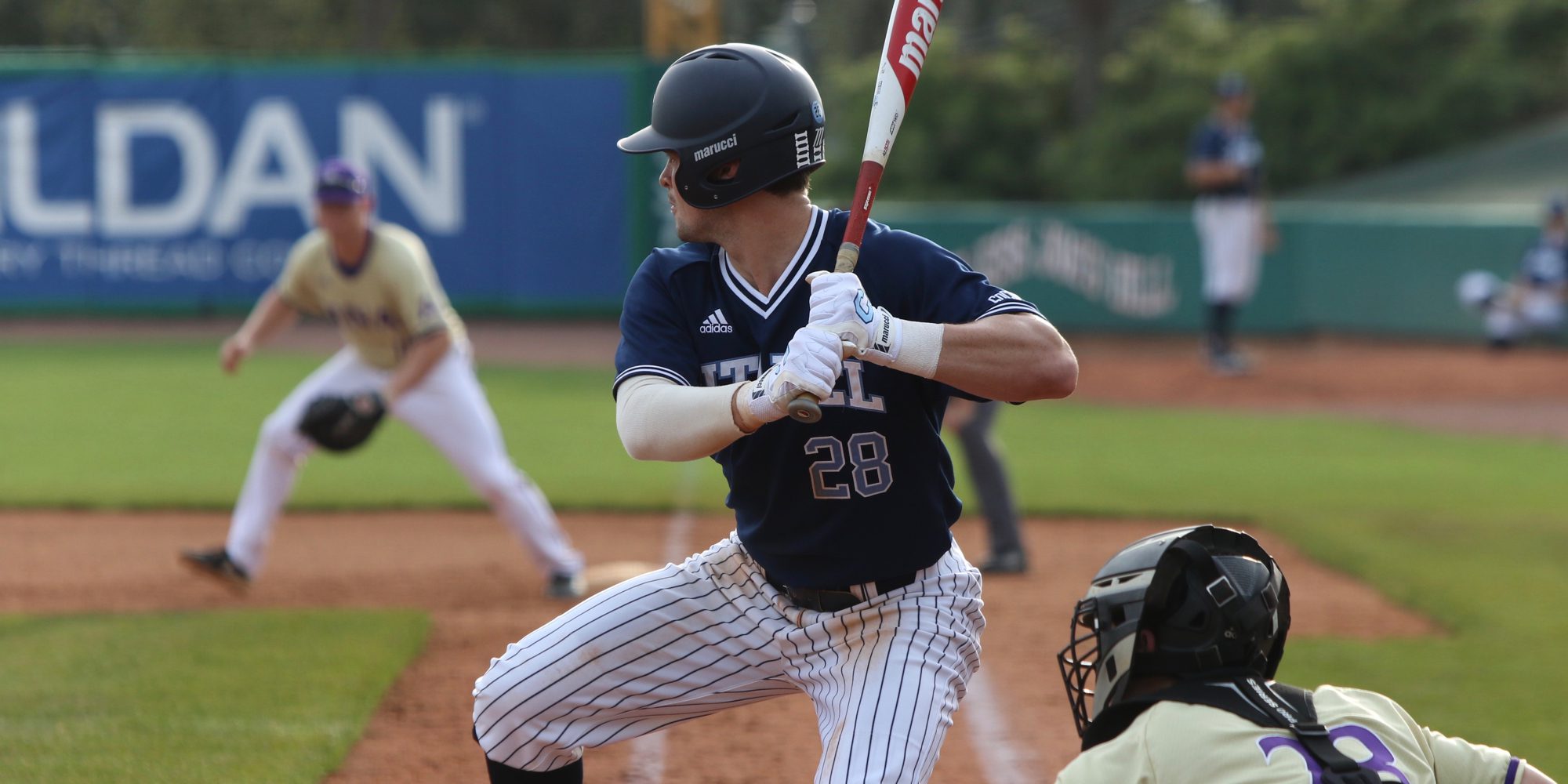 But Skole hasn’t lost faith in Botkin, who has seven steals in eight attempts.

“Like Ryan, he’s a freaky, dynamic athlete,” Skole said. “The difference is that Lane is more of a top-of-the-order hitter, a basestealer and a table-setter.”

Skole considers both McCarthy and Botkin pro baseball prospects. In fact, McCarthy was ranked by D1Baseball as the No. 6 prospect in the Southern Conference for the 2020 draft.

“Neither guy is close to reaching his baseball potential yet,” Skole said. “You have to remember that they miss fall practice every year due to football. In the spring, they only practice with us one day a week while football is going on, and they miss the summer, too.

“We just throw them to the wolves, and Ryan is so talented that he is still putting up these big numbers. He has a chance to be a special player. When he takes batting practice, everyone stops to watch. He has freaky power, a plus, quarterback’s arm and a plus defender who can run like a wide receiver.

“Ryan is a big, physical kid with every tool to beat you in a variety of ways. Lane is very similar. It’s just that he has been away from baseball for two years.”

On Friday night in Week Three, the entire football team, coaching staff and their families – over 100 people – came to the Bulldogs’ baseball game in a massive show of support. McCarthy went 2-for-4 with two RBIs, and Botkin went 3-for-4 for his breakout game as The Citadel defeated North Alabama 6-3.

The next morning, McCarthy and Botkin woke up at 6:45 for breakfast and a football team meeting at 7:30. They played their football spring game at 11 a.m. – McCarthy threw a touchdown pass, as he is in the running to start at that quarterback.

After the scrimmage was over, they jumped into McCarthy’s car and drove to The Citadel’s baseball facility, where they had a 3 p.m. game. They arrived too late for team batting practice, took some individual BP and were able to get ready in time to be in the starting lineup.

Operating on almost no food since breakfast – McCarthy said he had a banana and a couple of bags of chips in the clubhouse – the two-sport athletes performed magnificently, combining for five RBIs in a 7-4 win over North Alabama.

Botkin went 2-for-4 with two RBIs for his second straight multi-hit game. McCarthy smashed a two-run triple off the wall in right-center, finishing 2-for-4 with three RBIs.

Sunday’s game may have been the toughest for them as the soreness from the football scrimmage kicked in, but McCarthy went 3-for-5 and Botkin went 2-for-5, helping to sweep North Alabama.

“Playing football and baseball is a grind – long days,” Botkin said. “I don’t know that a lot of people could do it, but I’m the type of person who needs to be doing something at all times or I get bored.”

Being a two-sport standout at a D-1 school isn’t easy. Minnesota’s Drew Hmielewski tried it for two years before giving up football in January of 2018, deciding to focus on baseball only.

A 6-2, 200-pound wide receiver, Hmielewski sat out the 2016 football season due to injury. In 2017, he caught no passes while returning five punts for 25 yards. In baseball this season, he is hitting .308 in just 13 at-bats, but he’s starting to get more playing time.

At Iowa, Connor McCaffrey is going to attempt to become a two-sport standout … but he will have to wait until basketball season is over.

McCaffrey, who is a 6-5, 205-pound redshirt freshman, is a reserve guard playing for his father, Iowa head coach Fran McCaffrey.

In baseball, McCaffrey was Iowa’s starting right fielder and cleanup hitter this past fall. Once he joins the baseball team this spring, he could find himself behind as it relates to other hitters who have been facing live pitching for the past two months while he has focused on basketball.

Which leads us back to Skole, who was inducted into The Citadel Athletic Hall of Fame in 2011.

Skole started 35 consecutive games for The Citadel football team, starring as a defensive back and helping the Bulldogs reach the NCAA Division 1-AA playoffs twice. He was voted his team’s captain in 1990 and led the Southern Conference in interceptions that season.

In baseball, Skole was The Citadel’s starting third baseman, leading the Bulldogs to a pair of SoCon titles.

Skole had a dream year in 1990 as The Citadel traveled to Miami for an NCAA regional and beat the heavily favored Hurricanes twice to advance to the College World Series. In fact, Skole hit a home run against Miami to clinch the trip to Omaha.

“That was a special time,” Skole said. “Miami was coached by (the late, great) Ron Fraser. They were the kings of college baseball.”

At the CWS, The Citadel lost twice to mighty LSU … but not before the Bulldogs beat Cal State Fullerton on Skole’s game-winning hit in the 12th inning.

Unfortunately for The Citadel, the Bulldogs haven’t been back to Omaha since. They haven’t won their conference since 2010, and they went 19-34 in their first year under Skole, and they are 7-8 this season but have won three of their four weekend series, including a set against crosstown foe Charleston Southern this weekend.

It won’t be easy, but Skole is determined to get The Citadel back to the CWS.

“I think about it every day, and my staff does as well,” Skole said. “It’s a little more difficult to accomplish now that we have super regionals.

“It’s more than likely that a non-Power Five team will have to go on the road for regionals, and home teams advance almost 90 percent of the time.

“But it’s all about playing your best baseball in June, and the fact that we’ve done it before (reaching Omaha), gives our program light at the end of the tunnel.”