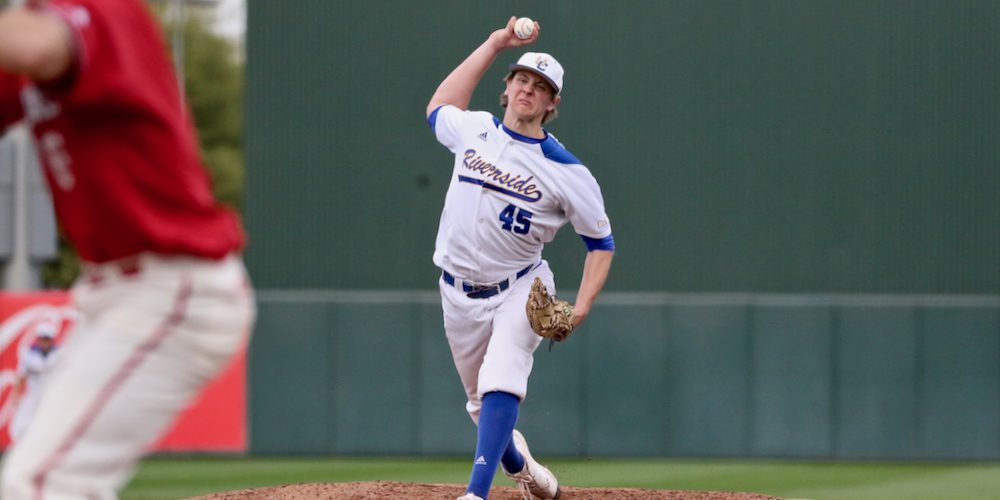 TEMPE, Ariz. — A day after Tim Salmon threw out the first pitch at Grand Canyon, two other members of the 2002 World Series-champion Los Angeles Angels of Anaheim met up just down the road in Tempe.

In the title-clinching Game 7, closer Troy Percival delivered the final pitch and center fielder Darin Erstad caught the fly ball it elicited. On Saturday, the two returned to their old stomping grounds at Tempe Diablo Stadium, the Angels’ spring training home field where they spent countless days working on their craft, to face off against one another as head coaches of their alma maters.

To make the matchup even more unique, UC Riverside sent Troy’s son, Cole Percival, to the mound to make his collegiate debut against Erstad’s Nebraska team.

Cole has pictures of himself wearing an Anaheim Angels’ onesie in the team clubhouse when he was just a toddler. There’s one where Erstad is holding him. He was the first of Troy’s Angels teammates to hold baby Cole. Erstad has a chain of text message pictures of Cole through the years that are like the height measurement marks on a door frame.

And there Cole was, all 6-foot-5 and 205 pounds, standing on the mound firing pitch after pitch with the man from the baby picture looking on from the opposing dugout.

“It was a nerve-wracking one for me today,” Troy said. “Any time my son goes out there, I don’t know which one is going to show up, but he showed up today. Got out of a couple of jams and I was very, very proud of him as a dad and a coach today.”

Cole gave up only one hit in 5.2 innings and struck out eight. He was charged with one run that scored after he exited in the sixth inning, but earned his first collegiate win. UC Riverside scored in each of their final four at-bats to pull away from Nebraska for an 8-1 victory.

“I’m not happy about [the loss], but I’m proud of him,” Erstad said. “It’s a proud moment for his dad and it’s one of those moments that I’ll remember.”