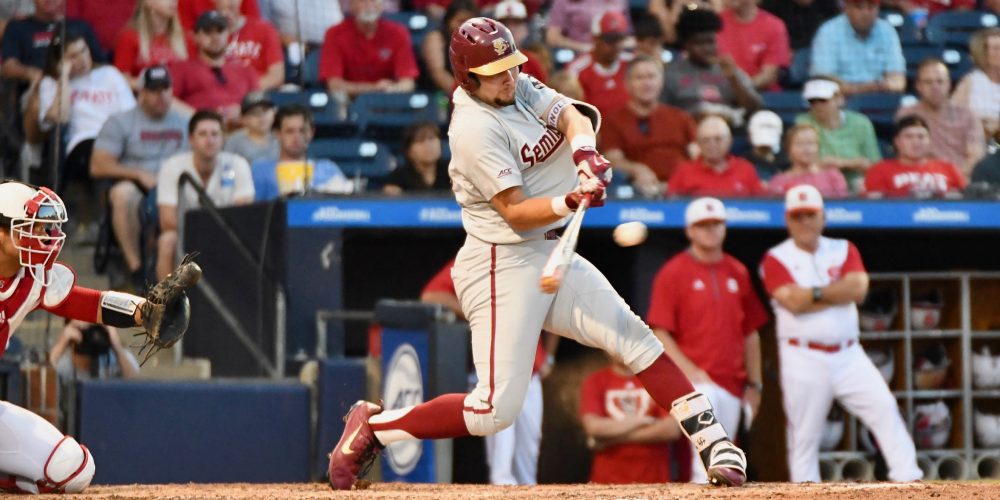 DURHAM, N.C. — Drew Parrish dazzled in Florida State’s 5-2 win over NC State on Friday night, sending the Seminoles to the ACC tournament semifinals. The sophomore lefthander went the distance and struck out a career-high 14 batters against one of college baseball’s premier offensive teams. He was simply outstanding, and he deserves a huge amount of credit for a very big FSU victory.

But so does his batterymate, Cal Raleigh. Parrish had his very best curveball working all night Friday, and Raleigh’s work behind the plate gave him the confidence to bury it in the dirt time after time after time, knowing it wouldn’t get past the brick wall better known as Cal Raleigh.

“Tonight my curveball was really working for me, and I felt a lot more comfortable throwing it for a strike or taking it in the dirt and allowing Cal to block it,” Parrish said.

“Cal did just an excellent job of blocking the ball to get the guy out at first base,” FSU coach Mike Martin said. “Those things some people overlook, but this is a guy that will go out there and give you everything he’s got every pitch, and I just can’t say enough about the way he enjoys the game of baseball.”

His blocking prowess is nothing new, of course. Raleigh put on a blocking clinic three weeks ago at Clemson, and it was more of the same in last weekend’s series win against the Wolfpack. Raleigh’s father Todd, a former catcher himself who served as the head coach at Western Carolina and Tennessee, sat behind the Florida State dugout Friday and watched his son smother one dirt ball after another. As good of a hitter as Cal has become — and we’ll get to that soon enough — Todd takes particular pride in his son’s superb defense at his demanding position.