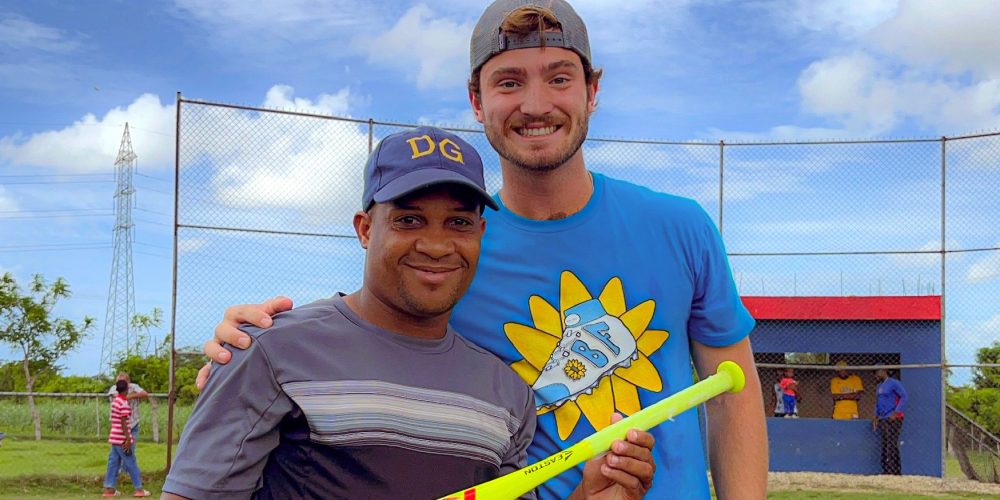 For too many people, having properly-fitting shoes – or any shoes at all – is an elusive goal.

Better yet, Savage has done something monumental about it, even though he is only 21 years old.

During a church-mission trip to the Dominican Republic while he was in high school, Savage saw the problem first-hand. He played baseball with against kids who were often barefoot or wearing flip-flops.

So, Savage started a charity – he called it Blessed Feet – and he far exceeded expectations by getting more than 1,500 baseball shoes donated to him by coaches, players and others throughout the country.

Recently, on August 3 to be precise, Savage had a hard time falling asleep, and it had nothing to do with insomnia.

It had to do with his trip to the Dominican Republic, planned for August 4-7. That’s when Savage was set to hand-deliver hundreds of shoes to needy kids.

“The trip was so long in the making,” said Savage, who had to wait for several factors, including the end to his TCU season, to get on that plane. “I was super excited. I was super nervous because the pressure was on to make sure everything fell in line.

“It was hard to fall asleep.”

Savage can now rest assured because he and his team of people – including his father David and four others – delivered 433 pairs of baseball shoes to the deliriously happy kids in the Dominican.

Also on the trip were Blessed Feet Vice President Ryan Patterson; social media/marketing director Jake Burton; and Tim Burton and Will “G” Allen, who are on the board of directors along with David Savage.

Luke Savage said he would have delivered even more shoes if not for the fact that American Airlines allowed his team to bring just 20 bags full of shoes.

Still, American Airlines was quite generous, waiving all fees for extra bags due to the fact that this was a non-profit organization bringing needed supplies to a third-world country.

But the bags restriction wasn’t the only hurdle. Once the Blessed Feet team got to the DR, there was an issue at customs.

“They thought we were bringing in the shoes to sell them,” Savage said.

Savage immediately got on the phone with the pastor he has been working with on this trip, Joel Alexander Cotes Ortiz.

“It was nerve-wracking,” Savage said. “But after 30 minutes of sitting there, they finally let us take our bags of shoes. Joel was our savior. It was like a miracle.”

Once the Blessed Feet team got on their bus to take them to the town of San Pedro de Macoris, Savage had other worries.

“I wasn’t sure how many kids would be there when we arrived,” Savage said. “We had never done this as an organization. There were a lot of unknowns.”

Those questions were soon answered.

“Our bus went through a lot of sugar-cane fields,” Savage said. “But as soon as we passed through those fields, we saw about 150 kids and 20 coaches waiting for us.

“To see all our hard work pay off, it was one of the best feelings of my life.”

Besides the shoes, the Blessed Feet team bought $1,000 worth of bats, balls, and gloves to give to the kids.

Savage and his team put on daily clinics that lasted up to four hours. After that, just about everyone stayed on the fields for several more hours each day.

“After the camp, we shared the gospel through a translator,” Savage said. “We also shared our stories, telling the kids why we are doing this.

“Then we prayed with them.”

Savage, a Christian, called his organization Blessed Feet due to a passage in the Bible:

“How beautiful are the feet of those who bring the good news.”

Savage said the kids they held the clinic for were extremely grateful.

Next up for Savage will be his attempt to get a better grasp of Spanish.

In other words, he wants to return to the DR in the summer of 2023. The plan, in fact, is to bring better gear and to hold a tournament in the DR next year.

Savage, though, was clearly touched emotionally by the kids in the Dominican.

“Even in three or four days, we grew very close to them,” Savage said. “Hopefully we made an impact.

“But leaving was bittersweet.”

Savage, who is majoring in Political Science and minoring in design, is set to graduate from TCU in December of 2023.

Savage said his favorite Spanish slang word learned on this recent trip was “gasolina”, which relates to throwing hard.

Throwing from two different arm slots, Savage is firing gasoline with an over-the-top fastball that ranges from 92 to 96. When he drops to a lower slot, he fires at 89-93 with a “funky” motion.

Savage also showed a changeup and an out-pitch slider as TCU finished 38-22, including a 2-2 run at the College Station regional.

“I thought it was an awesome year, but it ended too short for our liking,” Savage said. “We had a bunch of fun.”

For the summer, Savage said he had an invite to play in the prestigious Cape Cod League. He turned it down, going to the Dominican Republic instead.

“I’m happy how everything turned out,” Savage said.

For 2023, TCU’s coaches want Savage to compete for a rotation spot. Savage wants that, too.

“I’m hoping it will work out in the long run,” Savage said. “I feel fortunate to play college baseball.”

Without a doubt, college baseball is lucky to have Luke Savage.