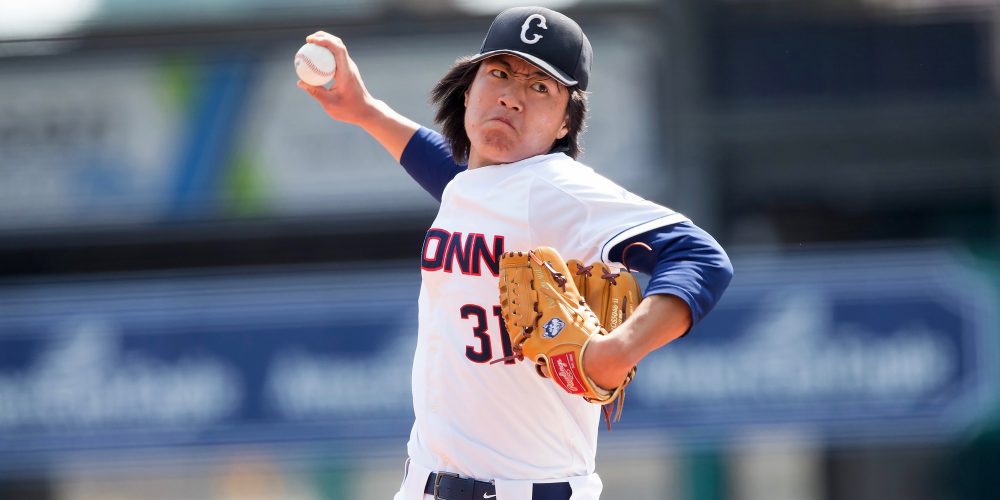 It’s not an easy time to be Asian in America.

The coronavirus pandemic, which reportedly originated in the city of Wuhan in China, has already led to more than 28,000 deaths in the United States. There’s widespread panic in the U.S. – which has more coronavirus cases than any other country — and hate crimes against people of Asian descent are on the rise. There also reported incidents of verbal abuse … and the stares … and hurtful comments by those who insist on calling this pandemic the “Chinese virus” or the “kung flu.”

But Jianyi “Jimmy” Wang, a remarkably mature 20-year-old righthander for the Connecticut Huskies and quite likely the only Chinese-born baseball player in Division I, urges calm.

“People are scared and frustrated,” said Wang, who was born in Beijing and came to Michigan by himself at age 12 as a foreign-exchange student. “They see their loved ones get sick, and they’re desperate.

“Racism has always existed. But I think when a vaccine is found, people will calm down. Whether you are Chinese or American or something else, we all need to support each other and stay positive.”

Wang said his parents are in good health.

His father, Xinming, a professor at the Beijing Institute of Technology who also runs a student-exchange program, is already back at his office. Wang’s mother, Yanjun, an editor for a company that writes text books, is splitting her time between home and office. They had both practiced social distancing for about two months before returning to some sense of normalcy.

Wang, like his parents, can be safely classified as an intellectual. He is majoring in Actuarial Science and has a 3.7 grade-point average.

But that’s where he and his parents diverge. His parents, both 5-foot-7, have never been athletes.

Wang, an avid weight-lifter who is sculpted at 6-3 and 210 pounds, began playing baseball in the third grade. Hitting wasn’t really an option, he said, because of his “terrible eyesight”.

Pitching, though, could be the ticket that takes him to almost unimaginable heights.

Josh MacDonald, who has tutored six All-Americans since becoming UConn’s pitching coach in 2012, puts Wang in an elite class, and that’s saying something.

Just last year, former UConn pitcher Anthony Kay made his major league debut for the Blue Jays, ex-Huskies star Jacob Wallace was drafted in the third round by the Rockies, making him the highest selection ever for a Connecticut reliever; and Mason Feole set the school record for career strikeouts.

Yet, here’s what MacDonald told D1Baseball when asked about Wang:

“Jimmy is like a piece of clay. When he gets to the pros, and he is able to train 10 months of the year without worrying about school, I would not be shocked if he makes the majors.”

Baseball in China dates to 1863, when the Shanghai Club was established. The sport was originally introduced to China by an American missionary.

However, in 1959, communist China outlawed baseball due to its Western origins. The sport returned to the country in 1975, and a pro league was started in 2002.

Basketball and soccer are king sports in China, but the Beijing Olympics in 2008 started to change things. China made its Olympic baseball debut and scored a stunning 8-7 win over Taiwan. China, managed by Jim Lefebvre, scored five runs in the bottom of the 12th inning to produce the upset.

“That was probably the most exciting game I’ve ever been a part of,” Lefebvre, a former Dodgers manager, told the media. “This turned our program around.”

Four years after that, Wang arrived in Jenison, Mich. But, due to rules about international students playing sports, Wang said he was only allowed to play one year of high school baseball. He chose his junior year, and he was highly effective for Jenison High, going 4-3, 2.04 and holding hitters to a .184 batting average.

But after not playing as a senior and with no scholarship offers, Wang’s baseball career appeared to be over almost before it started.

And that’s where his story took a twist.

In the summer of 2017, Wang was accepted to UConn, which has an outstanding academic reputation for his major and is located near Hartford, which is the headquarters of many of the nation’s top insurance companies.

Excellent at math and problem-solving, actuarial science fits Wang. But there was one problem he hadn’t found a way to solve: What to do about his love for baseball?

So, in a last-ditch effort to revive his athletic career, he sent an email to UConn coach Jim Penders, whom he had never met.

The email was forwarded to MacDonald, who wasn’t exactly thrilled about an unknown, true walk-on pitcher. 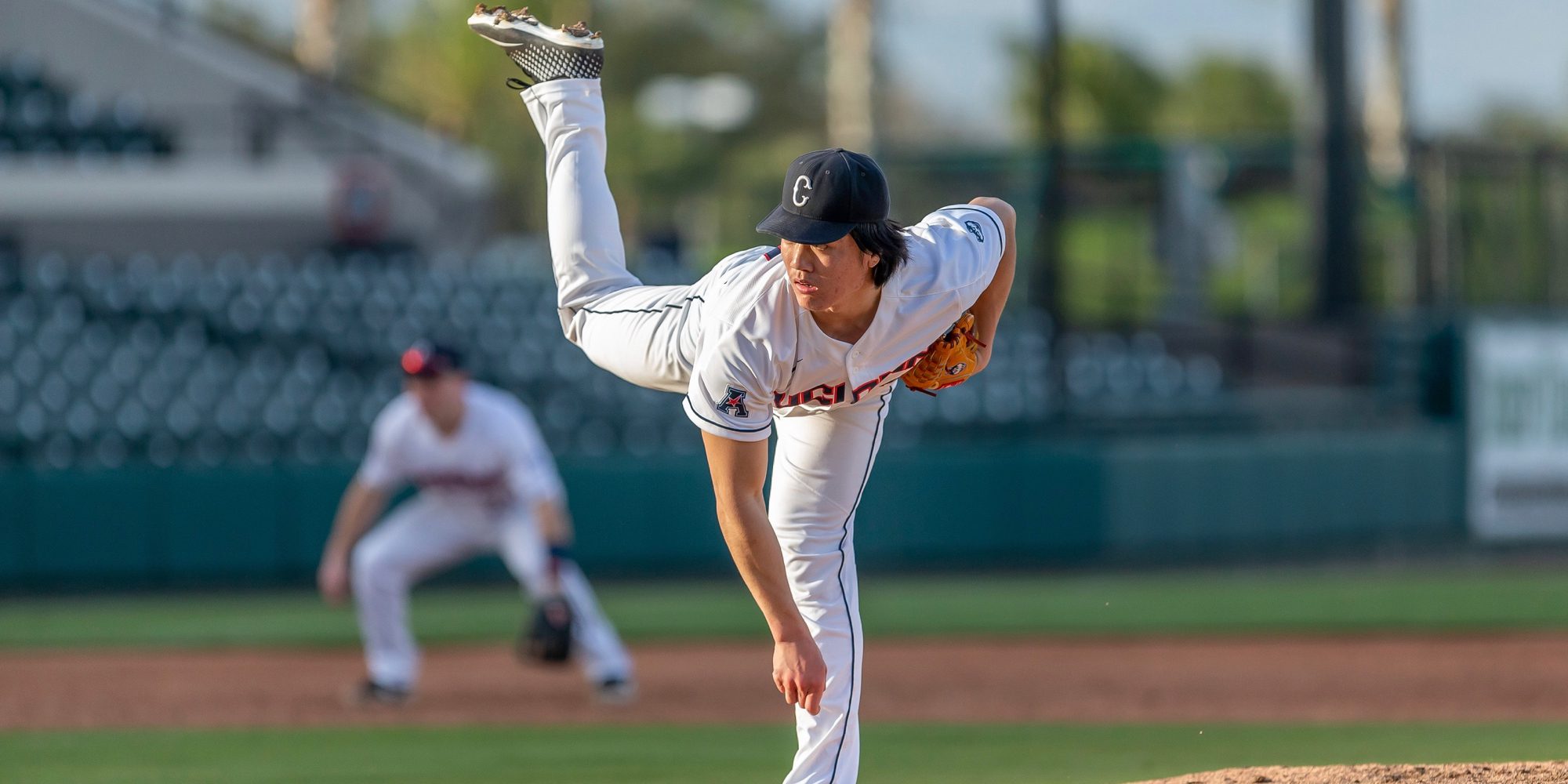 When Wang showed up in Penders’ office for try-out day, MacDonald was summoned.

“Then I saw Jimmy, and he’s about 6-4, and he’s shredded, and my body language changed.”

“We saw a tall kid, and he was long-tossing from foul pole to foul pole,” Gozzo said. “It was really impressive.

“When he got on the mound, he was throwing 91, 92. He didn’t always know where it was going, but he hadn’t pitched in over a year.”

Gozzo also took note of Wang’s delivery, which included a high leg kick and a hesitation that required extreme balance.

Once he got on the mound for a fall scrimmage, Wang suffered a setback – a massive home run hit by Conor Moriarty, who is now a senior third baseman.

“Conor hit that one about 14 million feet,” MacDonald joked.

Added Wang: “He hit an absolute nuke. The guys were joking that it ended my career.”

“It was a difficult decision – I’m not going to lie,” Wang said. “A lot had to do with my heavy course load. In order to stand out, I had to put in hundreds of hours of study time.

“(During that one week of fall ball), I was tired every day. I didn’t have enough time to study.”

It was easy to spot Wang as a freshman student at UConn. He was the tall kid who wore a navy-blue Huskies baseball cap everywhere he went, and that was with a purpose. It’s the only thing that kept him connected to the game he loves.

“During my freshman spring, I questioned if I made the right decision,” Wang said. “My dad convinced me to give baseball another chance.”

During his second year at UConn, Wang decided to try out for baseball again. But before he was given a spot on the team, Penders and MacDonald wanted to make sure he wasn’t going to abandon the squad when the going got tough academically.

“I didn’t want to cut a kid who was willing to do it for someone who was going to quit,” MacDonald said.

Given the proper assurances, the UConn coaches allowed Wang to make the team. Wang made the most of the opportunity, going 3-2, 3.91 as a freshman, striking out 40 batters and walking 32 in 48.1 innings. He made 19 appearances, including 12 starts, and in his first collegiate game, he pitched two scoreless innings against fourth-ranked Louisville.

Gozzo said Wang was so good that day that one of the Louisville batters asked him:

“Where did you get this guy?”

Wang wasn’t nearly as stellar this year, going 0-0, 7.70 in three appearances, all in relief. In just 4.2 innings, he struck out six but allowed five hits, four walks, three hit-by-pitches and one homer.

However, there were extenuating circumstances. Wang injured his back while lifting weights, and that led to some arm issues while he overcompensated to make his delivery work.

MacDonald, a former Huskies pitcher (10-8, 4.85) who earned the first win in the Penders UConn era on March 3, 2004 and became Penders’ pitching coach eight years later, said Wang had just gotten back to normal when college baseball shut down due to the pandemic.

In his last appearance, Wang allowed one run in two innings. He gave up a homer to the first batter he faced but then struck out five in UConn’s 20-1 win over Presbyterian on March 7.

“It’s really hard for hitters to time Jimmy,” MacDonald said. “His leg comes up, and it stops and slowly comes down. He has a backspin fastball that gets on you. Facing Jimmy is like going against a submarine guy. You’re not seeing that look very often.”

UConn went 8-5 this season against a brutal schedule and finished its year on a five-game winning streak. The Huskies also went 3-2 against 2019 national champion Vanderbilt and 2019 national runner-up Michigan. Both Vanderbilt and Michigan were No. 1 in the nation in one major poll when they faced the Huskies.

Wang plans to return to the Huskies in 2021. He is also on track to earn his bachelor’s degree next year, and MacDonald believes Wang could be selected in the top 20 rounds of the 2021 MLB Draft.

“I haven’t had a guy who looks like one of those SEC (pitchers). But Jimmy looks like that,” MacDonald said. “He has a lot of work to do, especially on his secondary pitches (slider, splitter, changeup). But I think there’s a big future for him.”