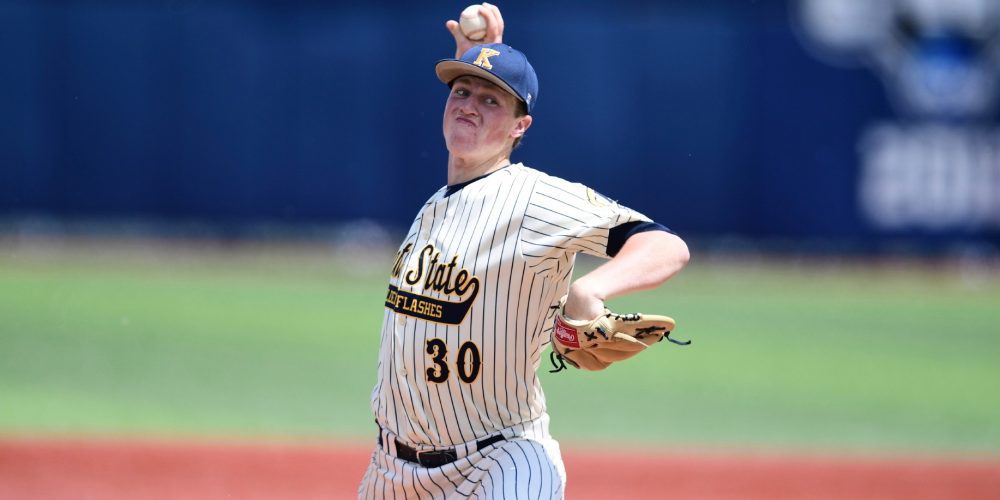 Kent State has been the most consistent program in the North since the 1980s. The Golden Flashes recently reached the 30-win plateau for the 30th consecutive season — a streak that includes eight 40-plus win seasons, 12 trips to regionals and a run to the 2012 College World Series. The program has kept winning through coaching changes, from Bob Todd to Danny Hall to Rick Rembielak to Scott Stricklin to Jeff Duncan — there hasn’t been a dip.

There are some common threads running through all those years of success. For one thing, Kent State always seems to have a big-time ace atop the rotation, especially in the last 22 years under pitching coach Mike Birkbeck. KSU has produced a couple of first-round picks this decade (Andrew Chafin and Eric Lauer, whose 0.69 ERA in 2016 was college baseball’s lowest in 30-plus years). The Flashes have produced six big league pitchers, from Matt Guerrer to John Van Benschoten, Dirk Hayhurst to Andy Sonnanstine to Chris Carpenter and Chafin.

So it means something to be the Friday night ace at Kent State. And Joey Murray is a worthy bearer of the flame for the Flashes.

Murray, a junior righthander, is well on his way to becoming Kent State’s latest All-American. Through 12 starts, he’s 8-1, 1.02 with 117 strikeouts and a .146 opponents’ batting average in 79.1 innings. His name is all over the national leaderboards — he ranks first in fewest hits allowed per nine innings, fourth in ERA and strikeouts, 10th in WHIP.

“Obviously when you’re rolling out a Friday guy like Joey Murray, it’s kind of like rolling Lauer out two years ago,” said Duncan, Kent State’s fifth-year head coach. “At times it seems unhittable.”