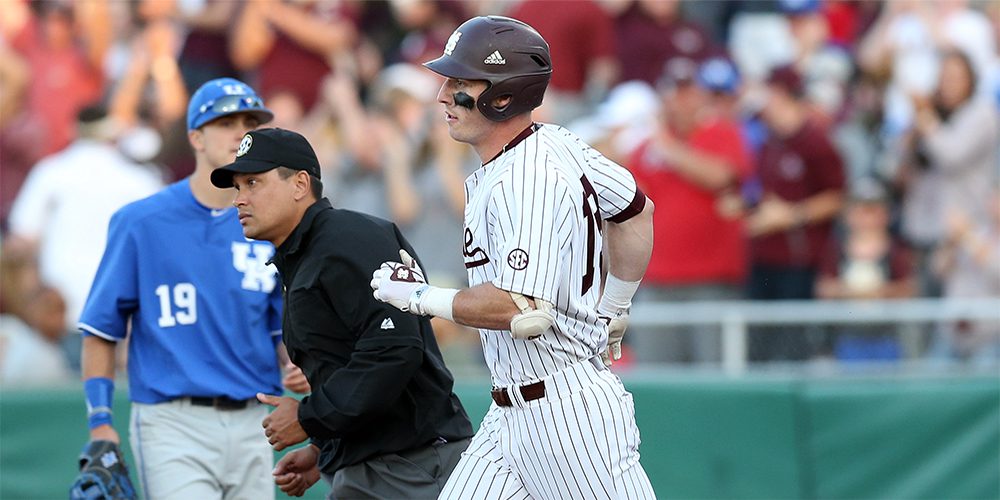 MOBILE, Ala. — There are times when natural talent and hard work align. When they do, the results can be amazing. Like the time your Aunt Eunice made the greatest pecan pie in the county. She even has the ribbon to prove it. Or the time you and your college buddy Jay won 10-straight games of cornhole. Those are the moments we live for.

Sometimes baseball players have moments like Aunt Eunice or Jay did. Brent Rooker had one of those moments. The Mississippi State first baseman entered mid-April hitting .450 with 16 homers and led the SEC in almost every offensive category. He was basically living out the dreams many of us share – waiting for everything to come together and performing at your peak.

The epicenter of the Rooker barrage came in a home series in Starkville against Kentucky.

“Every time Rooker swung the bat, I felt the ball was going to go out,” Kentucky coach Nick Mingione said. “Every .. swing … he … took.”

Fortunately for the Wildcats’ coach, it only seemed that way. During the first game of the series, Rooker went 0-2 with a walk and a hit by pitch. Then came the second game where all he did was go 4-4 with three homers and six RBIs. After the four hits, three of them turning into souvenirs into the homemade rigs that surround the outfield wall, Mingione just intentionally walked Rooker.

Kentucky walked him even though there were already runners on first and second. Yep, he advanced two runners into scoring position to avoid pitching to Rooker.

“The game plan was not to let him beat us,” said Mingione. “It didn’t matter what we threw, he hit it out. Finally you get to the point where we are not even going to try to intentionally throw him balls, because they are ending up strikes and going out of the yard.

“So we just finally decided we were going to walk him and make somebody else beat us. I wish it wouldn’t have taken three homers to do that. He was going through one of those phases where it didn’t matter what anyone was going to throw him. If it was around the strike zone, he was getting barrel and it was going out. I have only seen a few players in that kind of place before.”