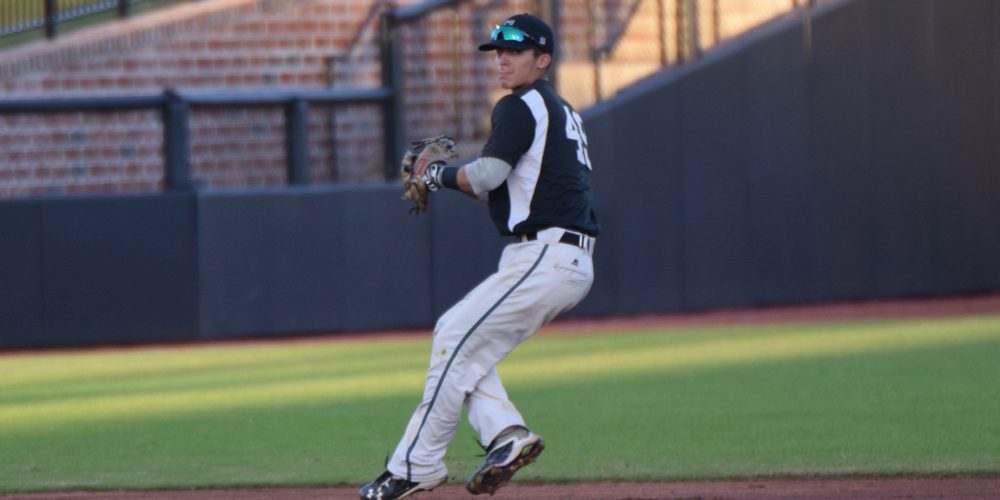 And yet opening weekend came and went, and Weisz wasn’t allowed to get on the field.

The reason? The NCAA’s restitution rule, which hangs like a guillotine over the head of any school that dares to play an athlete whose eligibility is in limbo — even if a court declares him eligible.

The restitution rule (Bylaw 19.7) allows the NCAA to impose penalties on a school for allowing a player to participate in games if that player is later deemed ineligible by a higher court. So if the judge’s ruling that Weisz is eligible gets overturned upon appeal, Coastal would have to forfeit all games in which he played.

The judge in this case, superior court judge Richard Strauss, attempted to circumvent the restitution rule, ordering that “the NCAA is restrained from retroactively declaring Keaton ineligible for games or other baseball activities in which he participates during the pendency of this Temporary Restraining Order …”

But the NCAA filed an appeal two days later and argued that under California state law, the temporary restraining order was automatically stayed once it was appealed. Weisz’s legal camp disputes that interpretation, but they also don’t blame Coastal Carolina for being cautious — they also don’t want the Chanticleers to have to forfeit any games in the event that this case doesn’t go their way.

So how did Weisz arrive at this impasse? Through a series of unfortunate events and through no fault of his own, as judge Strauss repeatedly stressed in his ruling.

The son of baseball agent Jonathan Weisz, Keaton makes up one-third of a set of baseball-playing triplets. His brother Zach is a sophomore infielder at Cal State Fullerton; his other brother Chandler went to Saint Mary’s out of high school but is now at Fullerton JC.

Keaton originally signed a letter of intent with Arizona, but his circumstances changed when former Wildcats coach Andy Lopez was forced to retired due to health reasons at the end of the 2015 season. New Arizona coach Jay Johnson told Weisz that the previous coaching staff had overcommitted its scholarships, so Weisz looked for somewhere else to play. He drew interest from a number of high-profile Division I programs but decided to go play for Sunny Golloway at Auburn.

During the fall of his freshman year in 2015, Weisz impressed Golloway and his coaching staff with his footwork, soft hands, plus speed and advanced instincts at shortstop. Golloway told D1Baseball in September that he was planning on using Weisz as his starting shortstop.

“Andy (Lopez) told me, ‘He will play every day for you.’ He doesn’t weight 150 pounds, but he is special at shortstop,” Golloway said then.

But Golloway was fired less than two weeks later — and that’s when Weisz’s fortunes took another turn for the worse.

Weisz’s attorney said his family was told by the administration that then-assistant coach Greg Norton (with whom Weisz had a good relationship) would become the head coach after Golloway’s ouster. But Norton was soon dismissed too, and Auburn hired Butch Thompson. Weisz decided he wanted to leave Auburn and go somewhere with a more stable coaching situation, but Thompson did not grant his transfer request that winter, and the university failed to inform Weisz of the proper procedure or his right to appeal.

The NCAA’s residency requirement forces players to sit out a year after they transfer from one Division I school to another, but Weisz applied for a waiver that would make him eligible this spring because of the “extraordinary and extenuating circumstances,” as Semerdjian put it. Auburn and Arizona both wrote letters supporting Weisz. In order to be granted that waiver, Weisz had to prove he was the victim of “egregious behavior by a previous institution staff member that directly impacts the health, safety and well being of the student athlete,” as NCAA attorney Justin P. Raphael explained it in court.

The NCAA denied Weisz’s waiver request — even though it also found that it was “necessary” for him to transfer away from Auburn in light of the circumstances. In his ruling, judge Strauss said:

“Well, one thing that we know that the staff or someone determined for NCAA is that it was necessary for Keaton to transfer away from that college. Keaton, given the best of all worlds, would very much like to be at the original institution where he originally had his hopes and dreams, but that was taken away from him… he didn’t do anything to cause any of this. He’s by far the innocent victim in all of it.”

If the NCAA acknowledges that it was “necessary” for Weisz to transfer, then why won’t it simply grant him his eligibility? What does the NCAA gain by keeping him on the sidelines? The NCAA declined comment, so we can only speculate.

The answer appears to be that the NCAA wants to safeguard its right to interpret and enforce its rules on its own, without external interference via the courts. The NCAA determined that Auburn wronged Weisz by not informing him of the proper transfer request and appeal procedures, but that wasn’t enough. In order to get the exception Weisz had to show that his health and safety were also negatively affected. And the NCAA evidently decided that he fell short of proving that.

But the judge took a bigger-picture view.

“I can certainly understand that the NCAA member schools don’t want these athletes jumping from school to school whenever they feel like it, but that’s not the case here at all,” Strauss said in his ruling. “As a matter of fact, Keaton didn’t want to feel like it at all. He wanted to stay where he was the first time, the second time, and he couldn’t. And even the NCAA recognizes that…

“So the whole purpose of these rules is to better the student athlete’s situation, and that’s not happening here. His situation is being made worse, and I cannot determine … what the basis of the NCAA’s decision was or what were the — what are the anchors that they used to determine if this is worthy of a complete waiver or just the partial waiver that he got (for a sixth year of eligibility). It’s not in any of these materials, and I’m confident that you all supplied me everything you could find.

“So this is sort of one of those, it seems like, ‘I don’t know for sure what (egregious behavior) is,’ says the NCAA, ‘but I’ll know it when I see it.’ And that’s — that’s no way to affect Keaton’s life in my estimation in this particular case. I’m not saying anything about other cases or other circumstances, but the discretion exercised here is unsupported by anything and doesn’t seem to be necessary.”

Strauss hit on some important issues there. The basis for the NCAA’s decision was never disclosed in any kind of detail — which is par for the course from an organization whose processes too often lack transparency. And the ruling sacrificed common sense and good faith toward Weisz in favor of propping up the power of the NCAA’s own murkily defined standards. By granting Weisz a waiver based on the extraordinary circumstances he faced — twice committing to a school where the coach was gone before he ever played a game, not getting informed of the proper appeal procedures — the NCAA would not be opening the door for other players to transfer freely. The NCAA should exercise common sense under unusual circumstances like this. Doing so would preserve, not imperil, its ultimate authority by making it less likely that judges will set precedent in overturning NCAA decisions.

And Semerdjian told D1Baseball that the NCAA’s legal team had expressed willingness to reach a common sense resolution, but that its tone abruptly changed after the judge’s ruling.

“I really thought there was a point the attorney for the NCAA and I were talking about resolving it in good faith and letting Keaton play, then we got completely shut down,” he said. “The attorney said it wasn’t his decision, it was the NCAA’s decision. Whoever made the decision, it’s on their radar and they’re going to take an aggressive approach on it and fight it to the end.”

And it appears the NCAA is going to win by running out the clock.

The reality is that whenever an issue of eligibility goes to court, the NCAA knows that time is on its side, and it exploits that advantage to the fullest. It takes time for a case to wind its way through the legal process, and time is of the essence for a player trying to get back on the field right away. Semerdjian said the appellate process usually takes a year or more “from brief to argument.” He is trying to expedite that process as much as he can, but he dejectedly acknowledged that even an expedited appeals process likely won’t happen fast enough to help Weisz get on the field in 2017.

“In reality, the NCAA knows, as do we, that even an expedited hearing that would take three or four months is too late,” Semerdjian said. “So essentially what they’re doing by appealing is they’re backdooring and circumventing the court’s order, and backdooring the process where they know that Keaton’s not going to play.”

And that’s why the restitution rule is simply unfair policy. The NCAA argued that it wouldn’t be fair to other teams if they have to compete against Weisz and he is later found to be ineligible; but the greater harm would be to Weisz, who wants to play professional baseball and will be 21 and a half before he ever plays a college game, severely curtailing his development as a player. And if a court finds him eligible, that should be enough to earn him the presumption of eligibility and get him on the field. If that decision is later reversed, fine — remove him from competition at that point, and don’t force the Chanticleers to forfeit any games he appeared in because they were following a judge’s order.

That’s how the process should work, but it’s not how the process does work in reality. The reality is the NCAA can just keep appealing and keep a player off the field for an entire season until the process has played out. And that’s not right.

But the Weisz camp is not going away quietly. Semerdjian said there are no reported cases published in California that pertain to the NCAA’s authority, so he believes he’s already made it farther in California court than anybody else has gotten against the NCAA.

“The only thing that could come out of it at that point is the Court of Appeals decides in our favor and makes case law against the NCAA, or rules against us,” Semerdjian said. “Do we continue on and make case law for the next poor player who gets stuck in this situation? Perhaps they’ll make some changes to the eligibility requirement.”

Jonathan Weisz isn’t ready to give up hope that he can get Keaton back on the field this spring, even though he knows it’s a long shot.

“I’m not gonna give up,” he said. “I’m going to do everything in my power to fight this thing to the end.”