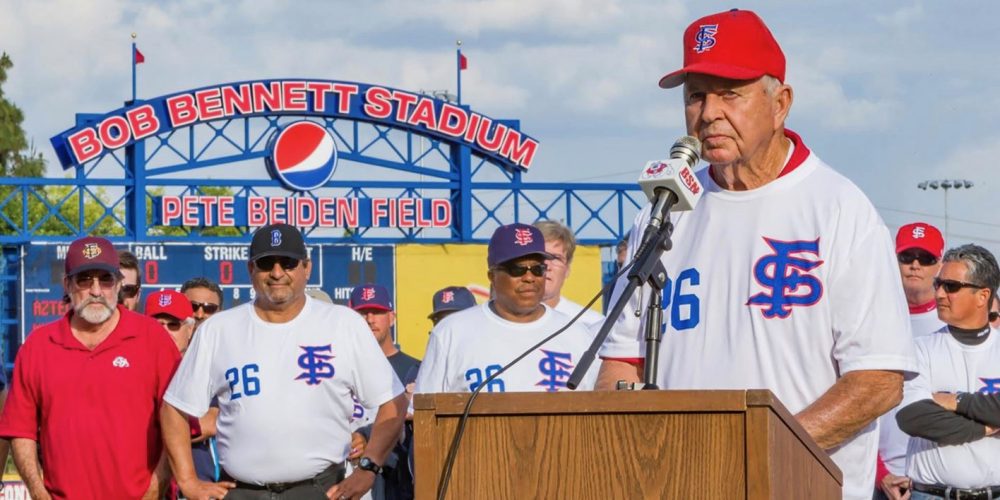 College Baseball Hall of Famer Bob Bennett, the winningest coach in Fresno State history, died Sunday at the age of 86. Coaches across the country saluted Bennett, a crucial figure in both the history of college baseball on the field and the advancement of the American Baseball Coaches Association.

Bennett retired in 2002 after 34 years as Fresno’s head coach. He won 1,302 games and finished his career with 26 consecutive winning seasons. He also led the Bulldogs to 21 NCAA tournament appearances and two trips to the College World Series. And he coached 32 All-Americans and nine first-round draft picks while earning conference coach of the year honors 14 times in five different leagues.

“Our prayers go out to the Bennett family,” current Fresno State head coach Mike Batesole said in a release. “Rest in peace to the greatest coach our Valley will ever see, [his] name on the stadium says it all.”

New Mexico coach Ray Birmingham posted his own tribute to Bennett on Twitter:

Bob Bennett, a legend, a teacher, a good man, my friend. pic.twitter.com/nPz0fFZu5i

In addition to everything he accomplished on the field, Bennett was a true leader in the college baseball coaching world, and a hero to coaches in the West. Bennett is a former president of the ABCA (1987) and continued to serve as a member of the ABCA’s Board of Directors and Hall of Fame Committee. He was also heavily involved in baseball at the international level, serving as head coach of the U.S. National Team in 1983 and 1986 and as a member of the national team’s coaching staff in 1977 and 1979. In 2000, Bennett was awarded the prestigious ABCA/Wilson Lefty Gomez Award, which is presented to the coach who has distinguished himself among his peers locally, nationally and internationally.

“Coach Bennett’s impact on college baseball and the Central Valley community is immeasurable and will have a lasting impact,” UCLA coach John Savage told D1Baseball. “He was a pioneer for the West Coast coaching community and a visionary that was 25 years ahead of his time.”

〈
Previous Article First Round Awaits For Georgia Fireballers Hancock, Wilcox
Next Article Off The Top Of My Head: The Regionals Edition
〉