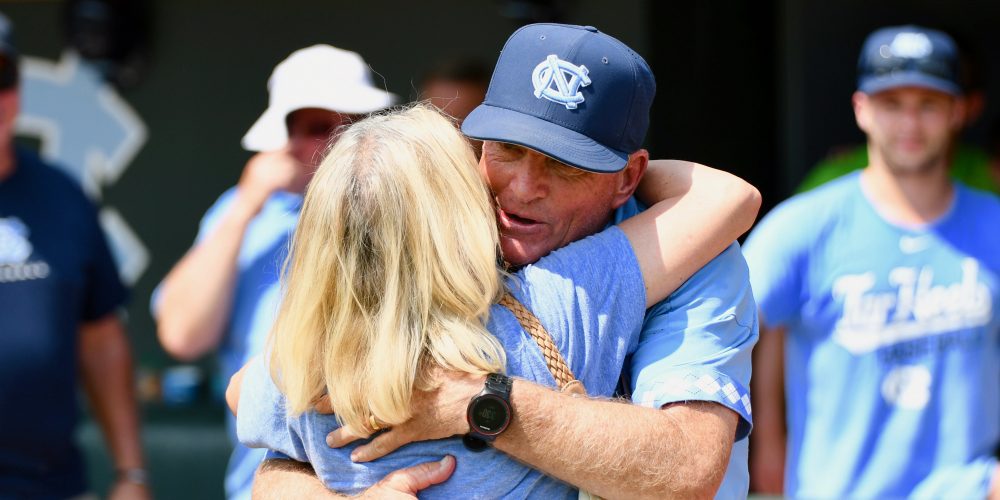 There were rumblings last fall that Fox, 64, was likely going to retire before the 2020 college baseball season. However, that did not come to fruition, as Fox decided to spend another season with the Tar Heels. The coronavirus pandemic abruptly halted the 2020 season and the subsequent family time caused Fox to reflect on his career and what he wanted to do with his life moving forward.

Thus, he decided to retire after an incredible career in Chapel Hill.

“Serving as the head baseball coach at my alma mater for the past 22 seasons has been one of the greatest blessings of my professional life,” Fox said in the release. “I have been in love with the University of North Carolina since I was a young boy. To see my dream of becoming a Tar Heel student, player and coach is hard for me to even comprehend.

“Life slowed down for Cheryl [his wife] and me, and we discovered the enjoyment of a simpler life,” Fox said. “Thankfully, I am healthy, and I feel this is the right time to step away from the rigors of coaching. I will miss the players, coaches, co-workers and our great fans, but it is time for me to be a full-time husband, father and grandfather, and do other things with my life.

Fox goes down as one of the most successful and transformational head coaches in college baseball history. Before his arrival to Chapel Hill, the Tar Heels had been a postseason mainstay. However, they had not been a household name at the College World Series. UNC had just four CWS appearances when Fox ascended to the Tar Heels throne. He changed that after just a few seasons.

During his 22 seasons at UNC, Fox guided the Heels to seven CWS appearances, making history in the mid 2000s by becoming the first Atlantic Coast Conference head coach to guide his program to four-straight CWS appearances (2006-2009). UNC twice played for the national championship under Fox, and both times, it fell just short against Pat Casey’s Oregon State Beavers.

Fox was incredibly consistent in getting his program to the NCAA tournament. In his 22 seasons, the Tar Heels only didn’t reach the tourney three times. They made 18 appearances with the 2020 season incomplete because of the pandemic.

Overall, Fox, including his 15 seasons at North Carolina Wesleyan, tallied a 1,487-547-5 (.731) record. At UNC, he tallied a 948-406-1 record, along with three ACC titles and five 50-win campaigns. His high-water mark in terms of wins came in 2013 when the Tar Heels amassed 59 victories. Fox ranks seventh nationally in terms of wins and 15th in NCAA history in winning percentage.

With Fox’s successful tenure over at UNC, the torch is now handed to Forbes. The long-time assistant has spent 19 seasons with Fox and the Tar Heels and has served in a variety of roles. He’s been a pitching coach, hitting coach and recruiting coordinator, and knows exactly what it will take to continue competing at a high level.

“Coach Fox recruited me in 1993 at North Carolina Wesleyan and my life changed the day I stepped on campus,” says Forbes. “Playing, working and learning from him for more than 20 years has had a huge impact on my career and me as a person.  I would not be the husband, dad or coach I am today without his influence. Coach Fox’s vision and leadership turned UNC baseball into a national power. I am going to miss being on the field with him. Words cannot express the gratitude my family and I have for Coach Fox and Mrs. Fox. I know he will enjoy the next chapter of his life and I wish his family all the best.

“I am beyond grateful for the opportunity to continue to represent the University of North Carolina as the next head coach of the baseball program,” Forbes continued. “For nearly two decades I’ve had the privilege of pouring my heart and soul into Tar Heel baseball. I’m so proud of what we’ve accomplished with Coach Fox and incredibly excited about our future.

North Carolina athletic director Bubba Cunningham weighed in on the hiring of Forbes.

“Scott Forbes is a talented recruiter, a strong communicator and has been instrumental in developing multiple facets of the program during his 20 years at Carolina,” Cunningham added. “As head coach, he will continue to build on all that our baseball team has accomplished.”

It’s a new era in Chapel Hill as a legend steps away.