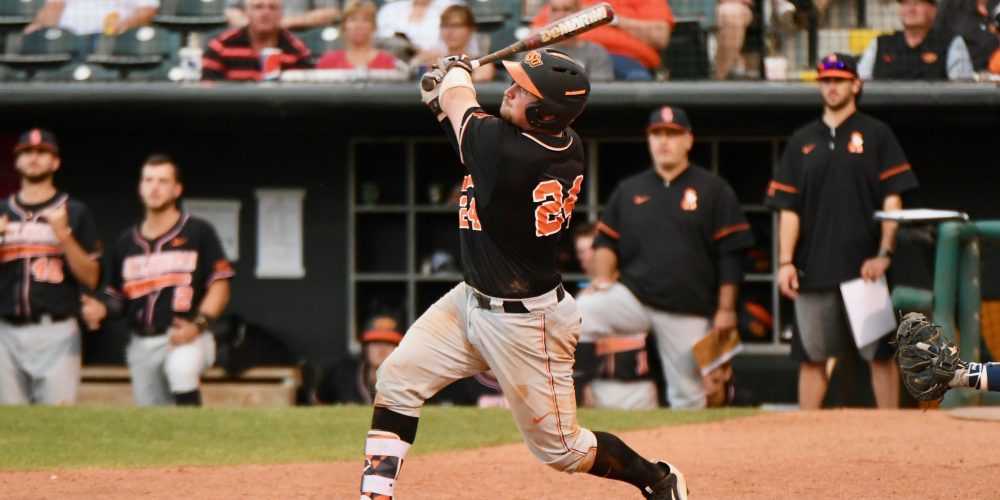 OKLAHOMA CITY — One day in the fall of his freshman year, Colin Simpson walked into the Oklahoma State hitting facility to take some hacks, and he walked out with a new nickname, courtesy of pitching coach Rob Walton.

“Rob Walton looks at me and goes, ‘You know, you’re kind of built like a tank. I’m gonna start calling you Tank,’” Simpson said. “I said, ‘All right.’ Since then it’s stuck. So, Tank it is, I guess.”

(Quick aside: I love that Walton is responsible for that wonderful nickname, because Walton has one of the better nicknames in college baseball himself. The other OSU coaches call him River — short for Old Man River.)

Fast forward to April 2, 2017. That day, Simpson walked onto the field against West Virginia, and walked off with another nickname after hitting two home runs in a game.

“When we left Stillwater earlier this year, we gave their catcher the nickname of Homer Simpson. He lived up to the billing today again,” West Virginia coach Randy Mazey said. “It’s like I said yesterday. Some people play really good on a certain field like we do. He just feels so comfortable at the plate against us. That guy’s killed us.”

Simpson, a sophomore catcher, certainly killed the Mountaineers on Thursday in a winners’ bracket game at the Big 12 tourney. Simpson recorded his second career two-homer game (and his second against WVU), going 4-for-5 with five RBIs and falling a triple short of the cycle to power OSU to an 8-4 victory. He put the Cowboys ahead with a two-run shot off ace BJ Myers in the first inning, then singled through the right side in the third, doubled to left in the fifth and gave the Cowboys some breathing room with a towering three-run shot to dead-center in the sixth.