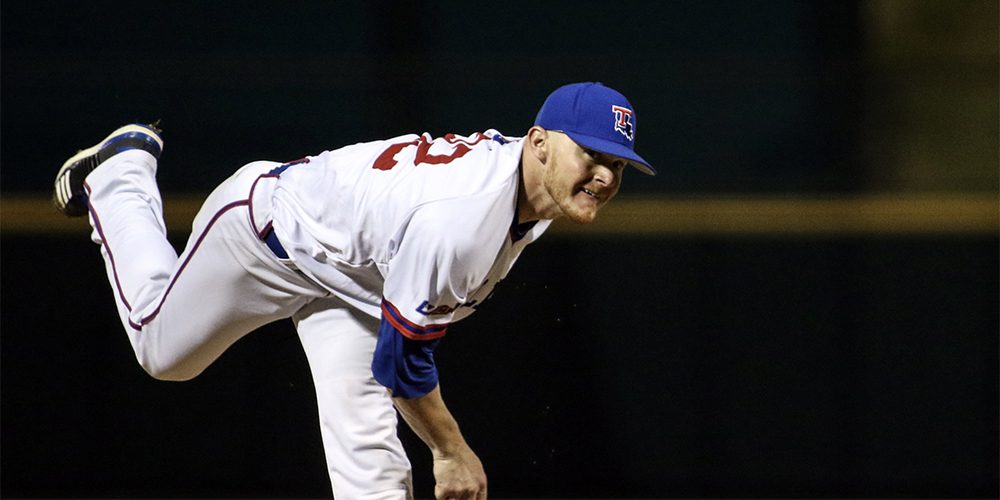 FRISCO, Texas – The opening day of the 2018 Frisco College Classic was highlighted by four potential tournament teams and four really solid frontline starters. Game one featured Baylor’s Cody Bradford and California’s Jared Horn, while game two lined up Texas A&M’s Stephen Kolek with Louisiana Tech’s Matt Miller. Two of the four were good, one was fantastic and one struggled as Cal drilled Baylor and Louisiana Tech edged Texas A&M in an upset.

Louisiana Tech’s Matt Miller entered Friday’s contest having surrendered only one earned run in 11 innings over his first two starts, but those outings came against significantly less talented offenses than Texas A&M. Miller struck out 10 and allowed an unearned run in a no decision against Pepperdine on opening day. He managed just four innings against SIU-Edwardsville, but struck out eight and gave a single run. It’s safe to say he took it to the next level Friday night, tossing seven innings giving up one unearned run on just five hits while striking out six and walking none against an immensely talented Aggie offense.

“He was unbelievable,” Louisiana Tech head coach Lane Burroughs said of Miller. “He’s a Friday night guy because he competes his tail off. He dominated the strike zone tonight. He just absolutely pounded the strike zone. He had great fastball command, and his secondary stuff was tremendous.”

Miller has had to wait a long time to finally see this type of real success at the Division 1 level. He was a dominant high school pitcher in Illinois, but his career still started at Heartland Community College. He pitched a total of four innings there, before missing two seasons after having Tommy John Surgery. Miller had his first opportunity with the Bulldogs last year, but he struggled to a 5.45 ERA in 36 innings. Tonight though, he solidified his spot. He probably didn’t need to – Burroughs loved his fight already – but tonight was about leaving no doubt.

“Being able to fight [Tommy John Surgery] created some toughness and made me get mentally strong,” Miller said. “Just coming in here and knowing this is a top 10 team, I visualized last night just beating them, just getting ahead and winning. It was just a great team win overall. I’m really happy, and hopefully this win gets us over the hump.”