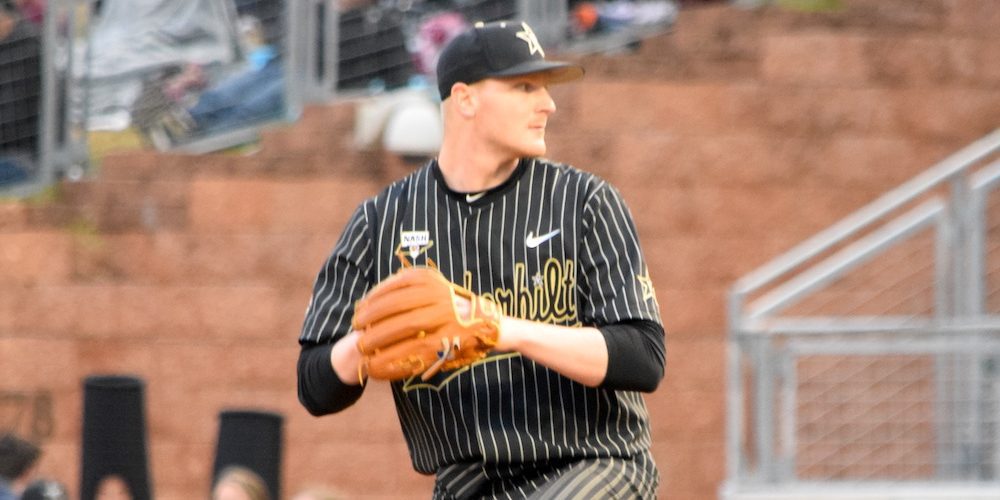 They came into tonight with 92 wins between them. The RPI rankings had both teams in the top three. When the regional pairings are released this coming Monday, both will be high national seeds with a home path to Omaha. On a day where good teams and good games were abundant, these two clubs played at the highest of levels.

Thursday night in the SEC Tournament winner’s bracket, Vanderbilt defeated Mississippi State 1-0. The game matched up two of the nation’s best pitchers in VU’s Drake Fellows and MSU’s Ethan Small. Each lived up to billing as they combined to strike out nineteen batters and allow one run.

“It was two guys competing very well, throwing a lot of strikes,” said Vanderbilt coach Tim Corbin. “They weren’t going to be beaten. The level of focus for both of those kids was outstanding. When you get in a situation like that, you can feel that it is different.”

It did feel different. On the heels of an incredible day of baseball that saw a near no-hitter by the losing team in a 1-0 game, a walk-off combination wild pitch/throwing error to score two runs and then fellow national seeds Georgia defeated Arkansas in another well-pitched classic, the day’s finale had much to live up to.

This game would have fit in nicely with last season’s Super Regional trio where all three games were decided in the final at bats. Mississippi State got the better of that one and ended up in the College World Series. This season, those teams won’t see each other again after leaving Hoover until a potential rematch in Omaha. But they could play again Saturday if Mississippi State can defeat LSU Friday in a rematch of their epic 17-inning victory Wednesday.

Small was at his best, allowing only three hits in eight innings and picking up the tough-luck loss to fall to 8-2. He struck out eleven, despite other pitchers outshining him on the radar gun. His low-90s fastball sure plays faster than that, something Corbin pointed out postgame.

“It is velocity,” said the Vandy coach. “It is velocity at the plate. Sometimes, the metrics or scoreboard or (radar) gun, it doesn’t tell you everything. He is a helluva competitor, a helluva pitcher. There is a lot of front side to him that hitters cannot see. It is that hidden velocity that gets to the plate and gets up on you. No matter how much you talk about it, how much you do to prepare for it, you can’t do it.