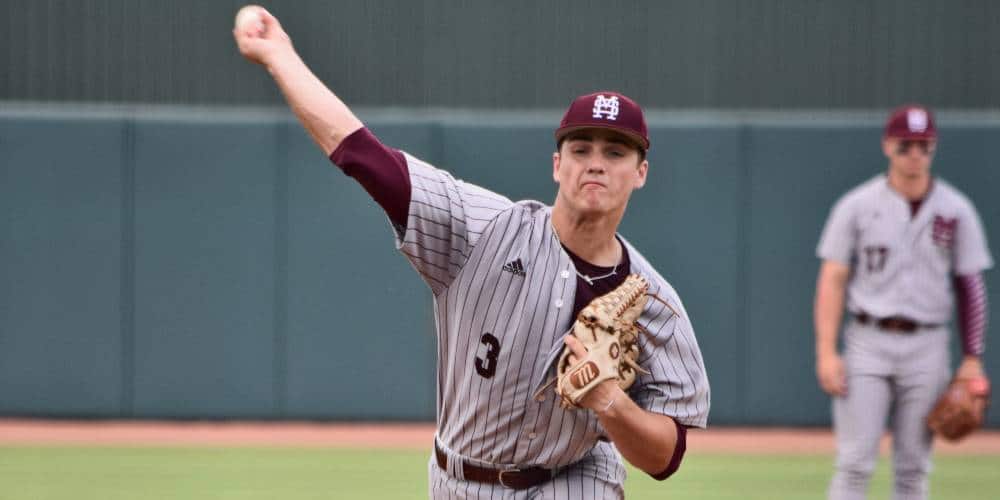 While Friday’s contest between Mississippi State and Texas A&M featured two of the better arms in the 2019 MLB draft in A&M’s John Doxakis and State’s Ethan Small, the Saturday contest was even better in terms of raw talent and projection with MSU’s J.T. Ginn and A&M’s Asa Lacy as the headliners.

Ginn surprised many last summer when he spurned an opportunity to sign as a first-rounder to attend college at Mississippi State. Meanwhile, Lacy has been a sophomore bloomer. The talented lefthander showed signs of forming into a premier arm as a freshman last season, but he didn’t show the velocity he has shown so far this season, and the pure overall stuff.

Both young pitchers had different approaches early in the game Saturday. Ginn was trying to help the Bulldogs solidify an important road series win, while Lacy aimed to get the Aggies even at 1-1. In the end, Lacy, the 6-foot-4, 215-pounder, was victorious, 1-0, in a seven-inning complete game performance.

Both pitchers, though, showed why they’ll likely be Top 10 picks next summer barring some unforeseen circumstances. They were special.

“I thought JT was really efficient early in the game. He had the sinker and slider really working and I thought he did a great job,” Mississippi State coach Chris Lemonis said. “He probably could’ve pitched longer; his pitch count wasn’t that high.

“As for Lacy, I thought he was dominant, but I also thought we did a pretty good job against him. We ran his pitch count up and you hate that it’s a seven-inning game against him. We did a good job, but when he needed a punch out or out, he was able to get the job done.”