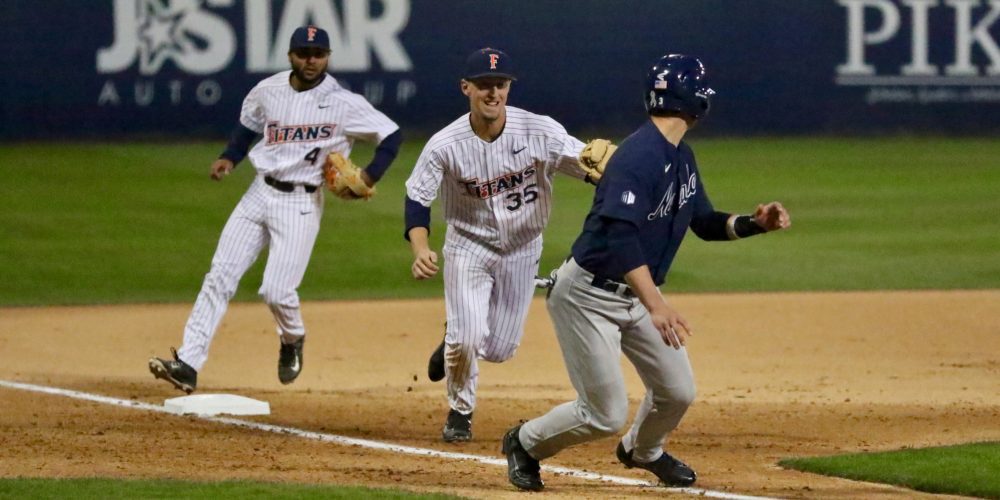 FULLERTON, Calif. — Cal State Fullerton head coach Rick Vanderhook was not happy with his team after the No. 22 Titans dropped a midweek game to Nevada. Despite it being a 2-0 loss, he called it a “butt whuppin’” and said the Titans need improvements across the board when asked what he wanted to improve.

“Everything. Everything. We are terrible. We need to improve on everything,” Vanderhook said.

His main issue was with the struggling offense. The Titans are hitting .213 as a team with only five batters hitting above that number. They have nearly as many strikeouts (24) as base hits (27) and many of their other outs aren’t putting pressure on the defense.

“We can hit popups to the shortstop and left field. We’re good at that, but that doesn’t help us,” Vanderhook said. “If we don’t figure out how to take some good at-bats and score some runs, we’re going to lose all three again [this weekend].

“I mean you have to score to win and we can’t score. Our veteran guys stink right now and they better improve or we’re going to be in serious trouble.”

The Titans host No. 25 Houston with lefty Trey Cumbie (10-2, 2.04 last season) at the front of their rotation. They need to get the bats going or they are in danger of extending the program’s worst losing streak to start a season. Fullerton had never started a season 0-4, so it already is in uncharted territory. But the best way to get out of a funk is with a big series win.