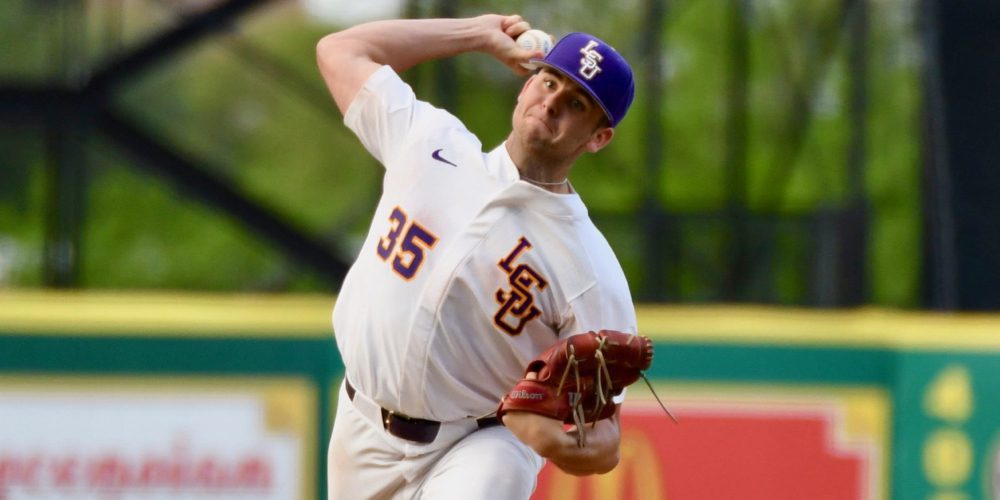 HOOVER, Ala. — LSU fans walk around the concourse at Hoover Metropolitan Stadium with shirts that say, “Baton Rouge East” for a reason. There’s just something about this ballpark, setting and the conference tournament that pushes LSU to play its best brand of baseball this week most every year.

Well, the Tigers are back to their usual tricks again this week. LSU opened the SEC tournament with a strong showing against Missouri in a 10-3 victory. And it continued those impressive ways late into the evening on Thursday in a 10-0 run-rule win over Kentucky.

“I thought his [Lange] mechanics looked very tight and he was pitching with a lot of confidence,” LSU coach Paul Mainieri said. “He was making some big pitches and didn’t have to get out of a bunch of bases-loaded jams. These kids aren’t robots and their confidence can fluctuate. But Alex feels like he’s throwing the ball as well as he ever has.”

LSU junior righthander Alex Lange wanted a little redemption against the Wildcats. Though he only allowed three runs in five innings against the Wildcats when the two met earlier this season, he didn’t have his sharpest stuff, finishing that game with a whopping eight walks.

Lange’s performance on Thursday was a stark contrast to that previous one in Lexington, though, the Wildcats made things interesting in the first inning.

In the first, Kentucky leadoff hitter Tristan Pompey sat fastball against Lange and blasted a 93 mph offering to center field. However, speedy LSU freshman Zach Watson tracked down the ball and made a terrific play. Lange then struck out hard-hitting UK first baseman Evan White on a nasty 81 mph curveball, while he worked around a two-out single from Zach Reks to avoid any damage.

Navigating through the first seemed to get Lange into a steady groove. He went 1-2-3 in the second inning with a strikeout on a beautiful 82 mph power curveball to end the frame, while he worked around a pair of singles in the third, thanks in part to more stellar defense. Lange then proceeded to retire seven-straight UK hitters before allowing a two-out single to nine-hole hitter Connor Heady in the fifth inning. The fifth, which was his best from a stuff standpoint, ended with Lange striking out Pompey on a 94 mph fastball.

Lange’s stuff was crisp for yet another week. He sat 90-93 and up to 94 mph with the fastball and commanded the pitch on both sides of the plate, while also not being afraid to throw the offering on the inside part of the plate. The righthander also showed good command of his 80-82 mph power curveball, while the 83-85 mph changeup, which LSU coach Paul Mainieri has urged Lange to throw more, was a go-to offering in more instances than usual.

“If you have a 10-run lead, you might as well have him on the mound. I thought he was extremely sharp,” Mainieri said. “Once you got the lead, Alex was really sharp and he was getting all of his pitches over [for strikes]. I thought he threw some wonderful changeups tonight. I’ve been asking Alan [Dunn] to throw more changeups because I think that pitch can be a game-changer, especially when he falls behind in the count.”