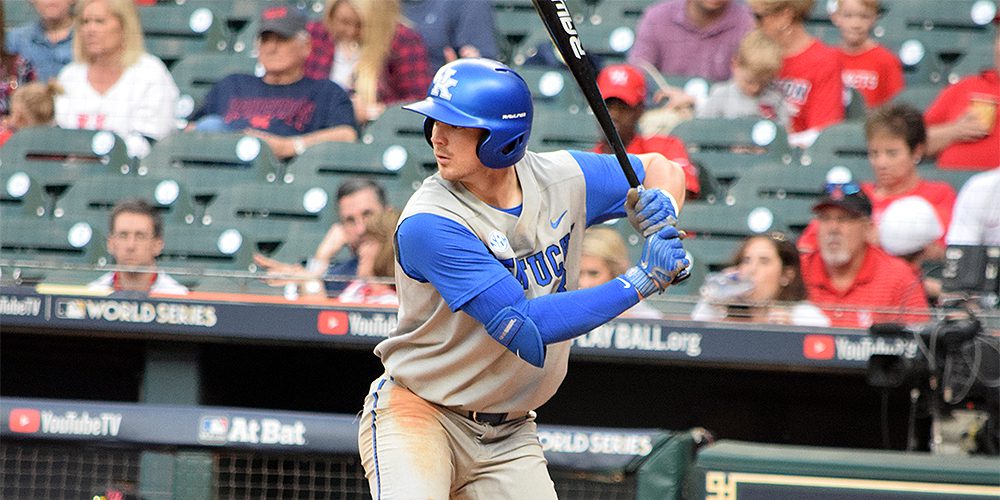 HOUSTON — Ryan Johnson has always had big-time potential. It’s precisely why Kentucky coach Nick Mingione decided to recruit him from the juco ranks.

The Wildcats had a 2017 campaign to remember. But while they welcomed back a cornucopia of front-line pitchers this spring, there’s no doubt the offensive lineup had some retooling to do even with the return of All-American Tristan Pompey, TJ Collett and Kole Cottam, among others. With that in mind, Mingione went out and made sure he filled in those holes with some big-time talents such as Johnson.

Johnson, who had a huge day at the plate Friday afternoon in a dominant 14-2 win over Houston, returned home to the Lone Star State and made an emphatic statement. He also showed that once and for all, he might just be back to being the player and prospect we thought he could be when he exited College Station High School and joined TCU.

“I’ll tell you what, Ryan was one of those guys that you saw in high school, and you immediately thought to yourself that there was no way he was going to college. He was that good. He was what it was supposed to look like,” Mingione said. “It didn’t work out at TCU, but we are sure glad to have him.”

As a senior in high school, Johnson, who has a picture-perfect frame at 6-foot-3, 205 pounds, was ranked No. 44 nationally and could’ve been a relatively high draft pick. However, he had a strong commitment to the Horned Frogs and showed up to campus in Fort Worth.

But things didn’t pan out as a freshman. Johnson was part of a terrific TCU team, and didn’t make a quick transition to big-time college baseball, hitting .214 with just three RBIs in 28 at bats. Given his limited production and opportunities, Johnson headed to San Jacinto (Texas) CC for last season, where he showed improvements, hitting .299 with seven homers and 15 doubles. He was tapping more into his power and the UK coaches took notice that he was beginning to find his groove.