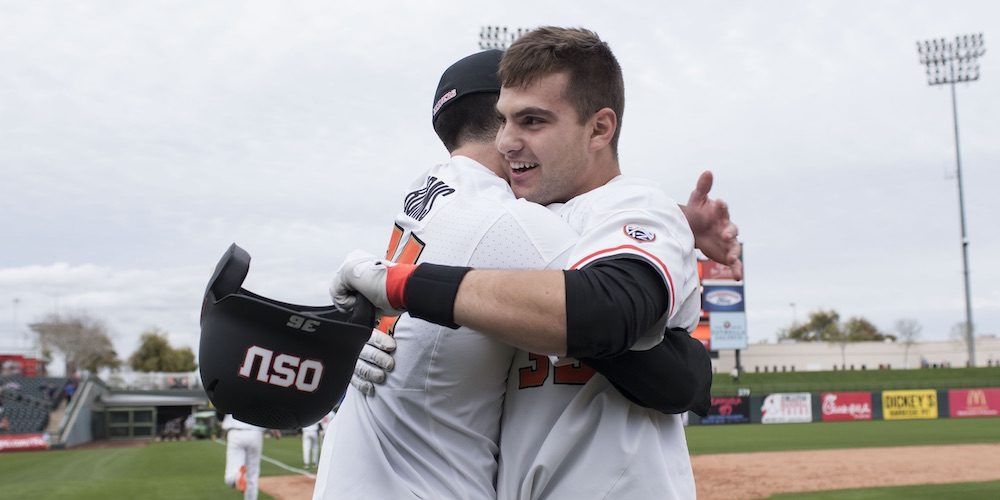 
SURPRISE, Ariz. — As the innings went by Friday afternoon, we were waiting for that Pat Bailey moment. Defending national champion Oregon State was scuffling against New Mexico and righthander Justin Slaten, and frankly, it needed a spark.

That’s when Bailey started pressing all the right buttons. The new OSU head coach, who replaced legendary head coach Pat Casey in the offseason, made all the right moves the final three innings of a 6-5 comeback win over New Mexico. It wasn’t a pretty opener by any means, but it was a win to begin Bailey’s tenure.

“I’m in my 41st year of coaching, and my 27th year as a head coach. I think the thing I liked most was our no quit attitude. We stuck with it and hung in there,” Bailey said. “We weren’t executing offensively and we had plenty of opportunities to score runs. I think we had eight free bases plus the errors, and we have to do a better job of hitting with runners in scoring position. I think we took too many pitches early in counts that could’ve been hit.

“Really, the only thing I didn’t like about the pitching today is that we had three lead off walks. You can’t do that and win too many baseball games,” he continued. “But other than that, I am pretty pleased.”

In the seventh inning, the Beavers finally started seeing UNM’s pitching better, and already had a run in to make the score 4-1 in the Lobos’ favor. That’s when Bailey called on redshirt sophomore McGarry to pinch hit with a pair of runners on base. McGarry proceeded to rip a two-run bloop single into right-center field to cut the score to 4-3. OSU was unable to add more runs in the inning, but McGarry’s key hit set the tone for a thrilling ninth inning.

New Mexico, which put up a Herculean effort against the defending champs, added another run in the ninth inning to make it 5-3 in its favor. But as they say, it’s tough to put the champions away.

In the bottom of the ninth, Adley Rutschman started the scoring in the frame with a roped RBI single to right field. After an infield single by Beau Philip and a walk to Tyler Malone with the score 5-4, the Beavers looked to an unlikely potential hero: Freshman Greg Fuchs.