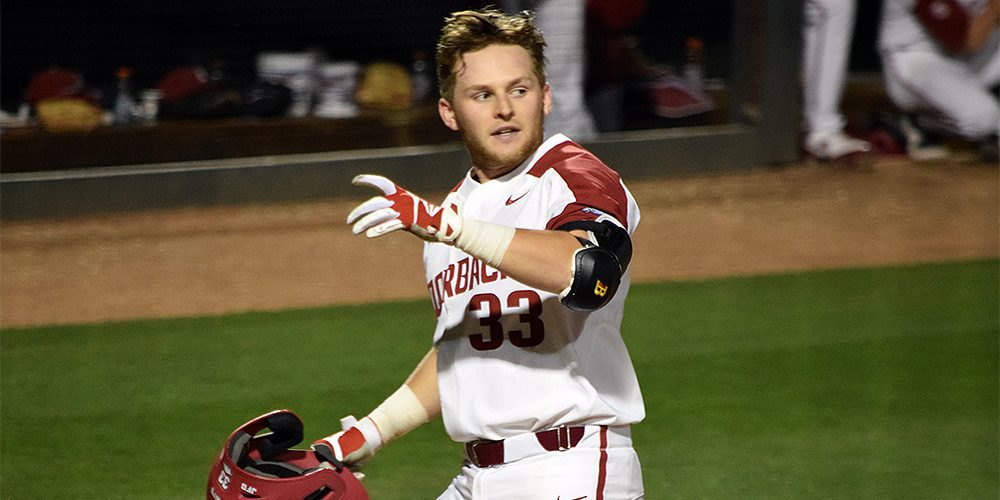 FAYETTEVILLE, Ark. – It’s a good weekend at the plate when you leave people speechless by the end of the series. It’s even more special when you accomplish that goal against a top-five team to start Southeastern Conference play.

That’s precisely what Arkansas did over the weekend against Kentucky. It was a series of tactical strikes meant to bury the Wildcats, and the approach worked to perfection. Not only did the Razorbacks sweep the Wildcats in a matter of 24 hours, they did so in such dominant fashion that it left even their own fans and scouts alike shaking their heads in amazement.

Just two weeks earlier at the Shriners College Classic, I wrote about Kentucky and marveled at its ability to completely overwhelm teams. This past weekend, it felt surreal to see someone do exactly that against those vaunted Wildcats, and with near impeccable pitch recognition.

In all, the Razorbacks scored a whopping 39 runs in three games against Kentucky, and did so behind 13 home runs. That, folks, is not a misprint. Meanwhile, UK scored 15 runs in those same three games.

The Hogs put on a clinic. It was a statement made, and it was the most runs the Hogs scored in a three-game conference series since 1997.

“Offensively, I mean, what can you say? We just kept pouring it on and we got some big hits. You gotta be a little lucky every now and then, and we elevated a lot of pitches and hit them out of the park,” Arkansas coach Dave Van Horn said. “We knew we’d in a fight with Kentucky who was leading the league in everything offensively, and I think we just stepped it up a little bit this weekend.”

Saying they stepped up a little bit would be putting it mildly. The Hogs imposed their will from the start in Friday’s series opener. Arkansas right fielder Eric Cole robbed Kentucky leadoff hitter Troy Squires of a home run to lead off the game and series, and he proceeded to set the tone offensively in the bottom of the first inning with an opposite field home run on an 82 mph offering from Sean Hjelle. His home run sparked a three-run first inning that Kentucky was unable to recover from. The Hogs hit two more homers in that game with Preseason All-American Grant Koch doing the double damage.

The same theme rolled over to the first game of the doubleheader on Saturday. Cole, again, sparked things for the Razorbacks. After Jax Biggers grounded out to begin the bottom of the first, Cole smashed a 92 mph fastball from Justin Lewis over the wall in center field. Two batters later, Luke Bonfield hit a home run on a 94 mph fastball. The flood gates opened in the first yet again, and once more, the Wildcats simply were unable to respond. Arkansas finished the game with five homers — Heston Kjerstad slugged a home run, while Biggers and Zach Plunkett also got into a groove and into the home run action. It was unbelievable as the Hogs rolled to a 14-2 series-clinching win.

“I thought we hit a lot of balls hard. We did a great job of trying to stay behind the baseball and not trying to pull everything. We were taking everything they gave us,” Van Horn said. “If they wanted to go the other way, we would just hit it the other way.”