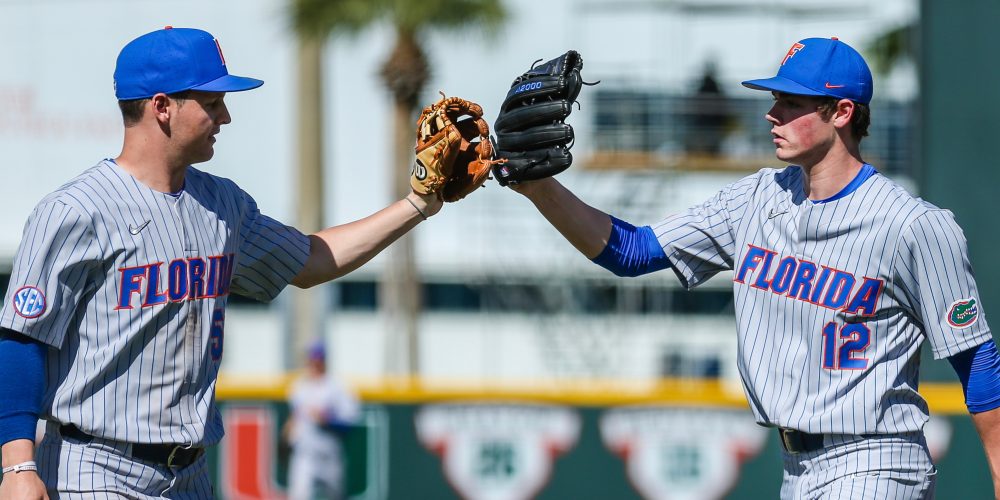 Barco, a Florida freshman lefty drafted by the Mets in the 24th round last year, passed the exam by snapping off a 1-2 splitter that froze Raymond Gil of the Miami Hurricanes, ending the fifth inning.

“That’s the pitch I wanted to throw in that situation,” Barco said of the splitter. “I knew I had to bear down. I couldn’t let anyone score.”

Gil had a different view.

“I thought that ball was outside,” Gil said. “But the umpire thought differently.”

Backed by homers by Jud Fabian and Josh Rivera and Barco’s 5 1/3 innings of one-run ball, the second-ranked Gators defeated the Canes 5-3 on Sunday.

That completed a rare road sweep of the nation’s top-ranked team, although the Gators (8-0) will be No. 1 by Monday morning, and Miami (4-3) is set to tumble in the polls.

Miami, which lost two games in this series in extra innings and the third one by just two runs, was led on Sunday by Gil, who had a homer and three RBIs.

“It’s disappointing to get swept at home,” Gil said. “We felt like each game could’ve gone either way. We just didn’t get the clutch hit or make a play or put someone away at the right moment. We have to bounce back.”

With the series now complete, here are 10 things we learned about the Gators and Canes this weekend: