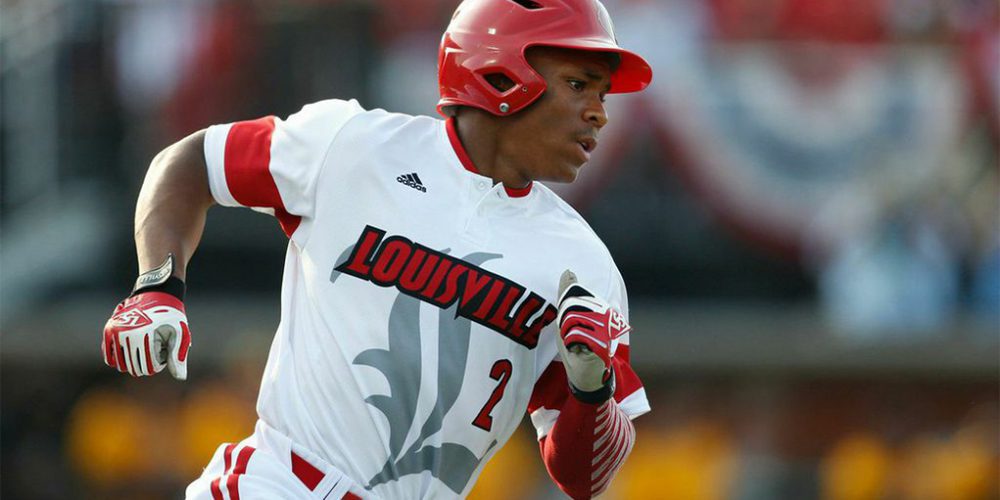 Most Exciting Player: Jacob Cronenworth, 2b/rhp, Michigan. A lefty line-drive machine at the plate and a righthanded power closer on the mound. Cronenworth is to Michigan baseball as Wawa is to New Jersey: He’s everywhere you look, and every time you see him, it makes you really happy.

Best Hitter: Corey Ray, of, Louisville. If you’re not adjusting for quality of competition, throw a dart at the Morehead State lineup and pick that guy.

Best Pitcher: Brendan McKay, lhp, Louisville. Funkhouser’s got the better stuff, but you can’t go wrong with the lefty with a 1.76 ERA and 11.3 K/9.

X-Factor: Cronenworth. Michigan’s team-of-destiny bit lasts as long as Cronenworth keeps putting the team on his back, the way he did in Minneapolis.

Best Starting Rotation: Louisville. The Cardinals’ second-best starter is going to go in the first round, and the rotation isn’t really a strength for any of the other three teams.

Best Bullpen: Louisville. Five relievers with double-digit appearances and an ERA of 2.03 or lower, including Zack Burdi.

Best Offensive Team: Morehead State. Michigan probably had the best offense in a tougher conference, but Morehead State still outscored the Wolverines by 120 runs, which is too big a margin to hand-wave away.

Best Defensive Team: Michigan. Late in games, the Wolverines will put Cronenworth or Carmen Benedetti on the mound and bring Eric Jacobson in to play second, which puts four middle infielders out there at once. Bradley’s solid in this area as well.

No. 1 Seed Win Probability (1-10): 7. There are really only two things that should really worry Louisville: Funkhouser having a bad day against Morehead State and Michigan’s conference tournament voodoo carrying over into the regional. 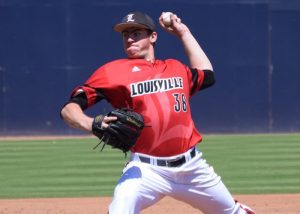 The Cardinals are following up back-to-back trips to Omaha with the No. 3 national seed, plus a third straight conference title in as many conferences in as many years, so while “experience” is probably overrated, it’s worth noting that most of Louisville’s key players have played in Omaha, while nobody else in the regional has even been to a tournament. We’re at least reasonably sure that the Cardinals won’t wilt under the bright lights.

Louisville starts its rotation with presumptive first-round draft pick Kyle Funkhouser and Golden Spikes semifinalist Brendan McKay, a freshman who also hit .319/.434/.441 as a first baseman. Louisville allowed the second-fewest hits per nine innings in the country and was No. 8 in the country in K/9 ratio, so when Cardinals pitchers are missing bats and hitting the strike zone, they’re going to win. Where the Cardinals get into to trouble is that sometimes they don’t always hit the strike zone: Funkhouser’s battled command problems down the stretch and the team is 147th in the country in terms of walks allowed per nine innings.

Offensively, Louisville finished in the middle of the pack in the ACC in most offensive categories, though there are some high points, greatest among them sophomore right fielder Corey Ray (.324/.390/.555, 32 stolen bases). Ray might be the top power/speed guy outside the SEC, and clearly the best position player in the regional. Louisville head coach Dan McDonnell has used several different lineups throughout the season, resulting in one of the country’s deeper benches. As a result, he has incredible platoon and positional flexibility when writing his lineup, which will serve the Cardinals well as the tournament wears on.

Bradley has become the poster child for the RPI robbing traditional power conferences of spots in the tournament, as the Braves’ No. 19 RPI — which peaked at 10 — never quite felt right. Going 10-11 in the MVC — which is a good conference, but not that good — is a bad look, and along with an 11-12 record against the RPI top 100, always gave off the impression that the Braves were a paper tiger.

Bradley will need a win out of No. 1 starter Elliot Ashbeck (11-4, 3.11) in the opener against Michigan, and from there, they can try to cobble together something that gets them from the start of the game to closer Matt Dennis (3-0, 1.59, 12 saves) until it’s time to start Ashbeck again. Cameron Roegner (4-0, 3.42, including eight innings of one-run ball against Dallas Baptist in the conference tournament) are obvious candidates for the Saturday and Sunday games, as is junior lefty Brent Stong (5-5, 5.29), whose peripherals are just as discouraging as his traditional numbers, but who just won a key start against Indiana State. Offensively, sophomore third baseman Spencer Gaa (.343/.383/.500) and senior outfielder Isaac Smith (.325/.435/.454) are the leaders of an offense that has decent power and patience, but strikes out and bunts more than it should, and doesn’t hit for a high average. 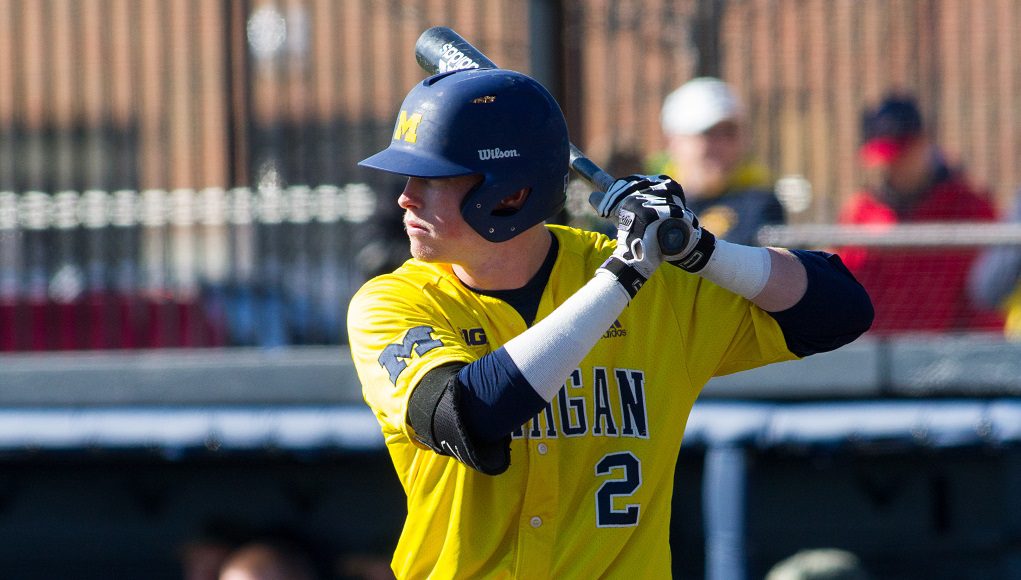 The Wolverines are playing with house money at this point, after disciplined defense and timely hitting led to an undefeated run through the Big Ten tournament. Michigan’s four wins in five days against the conference’s other four regional teams moved the Wolverines from out of the postseason picture to a regional, and there might not be a team in the country riding a bigger emotional high right now.

Head coach Erik Bakich rode his pitching staff hard in Minneapolis—sophomore lefty Brett Adcock started on three days’ rest twice, while Jacob Cronenworth closed out all four of Michigan’s games. So having four days off will allow Bakich to rest and reshuffle his rotation for the weekend. And that’s a good thing, because Michigan’s pitching has been its weakness this season—third in the Big Ten in K/9, but eighth in WHIP and seventh in ERA—so the Wolverines will take all the help they can get.

Incidentally, two of Michigan’s best relievers—Cronenworth and Carmen Benedetti—are also two of the team’s best hitters, posting triple slash lines of .337/.415/.504 and .350/.410/.518, respectively. Cronenworth leads the team, or is tied for the lead, in hits, walks, home runs, stolen bases and saves, which is an interesting combination to say the least.

Center fielder Jackson Glines, whose diving catch in the Big Ten tournament opener set the tone for the tournament, is hitting .359/.456/.514, while shortstop Jake Bivens (.335/.461/.365), the Big Ten freshman of the year, is frequently on base for Glines and Benedetti to drive in. Michigan led the Big Ten in batting average, OBP and runs scored, and if the magic doesn’t carry over to the opener against Bradley, we can look forward to the Wolverine offense absolutely pulverizing Morehead State’s pitching staff in a losers’ bracket game.

The Eagles are probably going to be in for the shock of their lives when they start their postseason against Kyle Funkhouser, because with the No. 254 strength of schedule in the country and only five games against power conference teams—the best of which was Auburn—we can bust out the ol’ “They ain’t played nobody” refrain.

But in the process of not playing anybody, the Eagles hit .335/.419/.523 as a team and led the nation in batting average, hits, runs scored, doubles and slugging percentage, and they were also second in OBP and seventh in home runs. Redshirt senior Chris Robinson hit .412/.480/.672 with a team-high 10 stolen bases. Senior infielder Kane Sweeney hit .352/.483/.621 with 14 home runs. And there are a couple other guys like them in the lineup.

Before we move on, I’d like everyone to just take a moment and ponder that. Giggle indecently to yourself if you need to—it’s okay.

Now, if you’re wondering how a team that hits like this only went 38-20, that’s because Morehead State’s pitching is almost as bad as its offense is good. Of the five pitchers who made five or more starts, Luke Humphreys (7-2, 4.79) had the lowest ERA. Morehead State pitchers combined for a 6.27 ERA, which is a preposterous number for a team that won almost two-thirds of its games. Ordinarily, I’d tell you to take comfort in the Eagles’ 7.7 staff K/9, but at the extremes, per-inning stats start to get deceptive, because (and it’s ridiculous to have to give this caveat for an entire team) if you’re allowing a lot of baserunners per inning (as the Eagles’ .380 opponent OBP would suggest), the number of plate appearances per inning distorts the numbers. I’m expecting two-and-out for Morehead State, but one of those might be a 19-16 game or something.