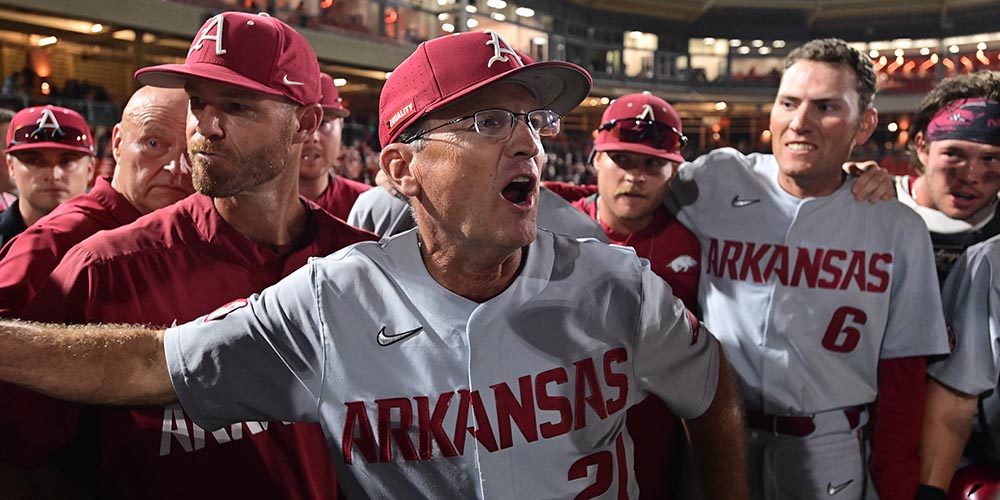 STILLWATER, Okla. – For a regional that had several records set for runs scored and home runs hit, not to mention the amount of time it took to complete both games played on Sunday in addition to Saturday night’s contest, Sunday’s game had a sense of normalcy to it.

Visiting Arkansas squared off against host Oklahoma State for the third time in as many nights and the in-game results and performances from each day did not disappoint. Unfortunately for the home team and the fans that came out to support them, it was Arkansas that emerged victorious, beating Oklahoma State 7-3 while really doing a good job shutting down the Pokes’ offense.

That in itself was no easy task considering Oklahoma State set a regional record for runs scored, scoring 43 on Sunday alone.

“Again, what a game,” Arkansas Head Coach Dave Van Horn said after the game. “Two teams just getting after it. We as coaches from Arkansas made the comment the other day after playing Oklahoma State on Saturday that this is one of the best teams we played all year. We’re very fortunate to get out of this regional with a win tonight. They’re physical, they have really good arms, there’s really no weakness up and down the lineup, they got speed, they can bunt, good mix of left and righthanded hitters and an outstanding coaching staff. I just felt like for us to win today we had to have some things go our way, and we did.”

The game time was still elevated at four hours and three minutes, but that seems like a walk in the park compared to the previous three games played in Stillwater. And the fans were vocal, from both sides, as 7,047 people packed into lovely O’Brate Stadium to see which team would be advancing to the super regional round.

Arkansas hasn’t missed a super regional since 2017, so it’s on quite the roll in recent years which includes back-to-back College World Series appearances in 2018 and 2019 and earning the No. 1 overall seed a year ago. Conversely, Oklahoma State hasn’t advanced to the super regional round since 2019.

Both teams limped into Monday with not many obvious pitching options to turn to. Arkansas went with Zack Morris, who coming into the weekend had made 17 relief appearances on the year, but didn’t have a start under his belt. In fact, he had yet to make a start at all during his collegiate career which began in 2020.

His effort was outstanding and it set the tone for the early part of the game, doing a good job sequencing between his fastball and breaking ball to keep the Oklahoma State hitters guessing and off balance.

The Cowboys went with Ryan Bogusz, who started the first of two OSU games on Sunday, their 29-15 comeback win against Missouri State. Bogusz only last 1 2/3 innings in that contest, throwing 49 pitches, so compared to the Cowboys’ other options, he made as much sense as anyone.

A scoreless game through the first three innings, the Arkansas offense got to Bogusz in the fourth, scoring four runs in the frame and booting Bogusz from the game. Brady Slavens led off the inning with a home run, and after Michael Turner walked and Chris Lanzilli was hit by a pitch, Jalen Battles came up big once again, driving them both home to push Arkansas’ lead to 3-0. Peyton Stovall made it 4-0 with an RBI single.

Stovall would add another RBI hit in the top of the sixth before Oklahoma State finally got on the board when David Mendham hit a one-out solo shot.

“Getting that fifth run was huge, even though we were up 4-nothing at the time, they can hit a home run real quick and that run is gone,” Van Horn said of Stovall’s second RBI base hit. “We just kept thinking we’ve got to score more runs because history has shown here that in the eighth and ninth inning no lead is safe.”

It was the seventh inning that Oklahoma State seemed to break through, scoring two runs in the inning. Caeden Trenkle and Chase Adkison hit back-to-back singles to lead off the inning. Roc Riggio once again smoked a double to right-center field that bounced over the fence. From there Van Horn went to his bullpen, calling upon big-bodied, hard-throwing righthander Zebulon Vermillion who recorded three straight outs, the first one which was a sac fly to the outfield that scored Adkison, and ended the threat.

Oklahoma State mounted another scoring threat in the eighth when Mendham led off the inning with a single. Another pitching change was made as freshman lefthander Hagen Smith was brought into the game. Smith, who started Saturday night’s game against Oklahoma but lasted only 1 1/3 inning, hit the first batter he faced, Nolan McLean, who was recorded out on a fielder’s choice off the bat of Marcus Brown. Brett Brown walked giving Oklahoma State a pair of runners on with only one out. It wasn’t meant to be, however, as Smith struck out the next two batters to end the threat.

“Our pitching was outstanding,” Van Horn said. “It started with Zack Morris, tremendous job. Kole Ramage came in and gave us everything he had – it was his third time to throw this weekend. Zebulon came in and got us a couple of outs and then Hagen came in and just just flat out was not going to be denied.”

Before Smith closed the game out with two more strikeouts in the bottom of the ninth Arkansas tacked on two more runs in the top of the inning to make it a 7-3 game. The runs came on Michael Turner’s two-run double, and Turner as a result was named the Stillwater Regional’s Most Oustanding Player.

In addition to coming up with numerous big hits and going 8-for-18 (.444) with five runs scored, 11 driven in and a pair of home runs, he also caught all five games that Arkansas played.

“They did a great job,” Turner said, sharing praise for his pitchers. “We knew going into the game it was going to be all-hands on deck and everybody down there was ready to go with the right mindset. It’s fun to catch, we’ve got some electric arms.

“As for the hit, I don’t know, just trying to have fun and put a good swing on a hanging changeup.”

Arkansas will take on the North Carolina Tar Heels in the Chapel Hill Super Regional next weekend.

Oklahoma State’s season comes to a close. They were rated No. 7 by D1Baseball to open the year and were ranked sixth entering the postseason, enjoying a successful season from beginning to end that saw them finish 42-22.

And they offer plenty of promise looking ahead to future years considering six of their nine regular batters are either freshmen or sophomores. That includes their dynamic second baseman, Roc Riggio, who exploded onto the scene this postseason with ridiculous results batting .536 with five doubles, four homers, nine runs scored and 17 RBIs.

So don’t be surprised to see Oklahoma State listed among the top 10 teams in next year’s preseason Top 25.

“This has been a fabulous group of kids from the first time we got together,” Oklahoma State skipper Josh Holliday said after the loss. “It’s made up of numerous special individuals from all different places and all different walks of life that have come together and formed. Just really an outstanding team and they’ve been an honor to coach.”