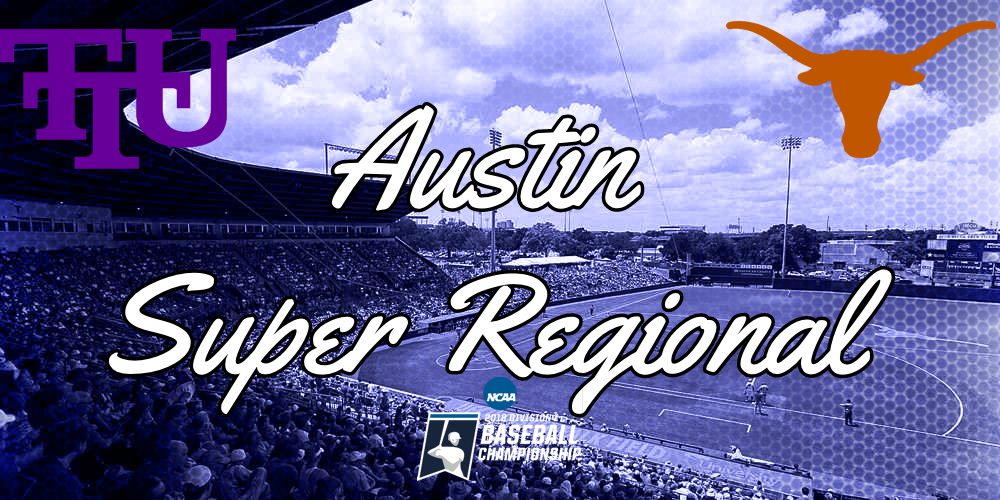 How Tennessee Tech Got Here: The Golden Eagles are not a Cinderella team, just so we can get that out of the way. Matt Bragga’s club was one of the nation’s most consistent throughout the spring and entered the postseason in the latest D1Baseball Top 25 Rankings. TTU beat Missouri State to kick off the Oxford Regional before losing to Ole Miss. However, the Eagles fought back with an elimination game win over MSU before double dipping the heavily-favored Rebels to advance to the supers for the first time in school history.

How Texas Got Here: The Longhorns finished the regular season on a high note and carried that momentum into the NCAA tournament. Texas made easy work of Texas Southern to kick off the Austin Regional before beating rival Texas A&M to get into the driver’s seat. The ‘Horns then closed out the Austin Regional with a thrilling win over Indiana. Texas has that magical feeling as it enters the supers.

Starting Pitching: The Golden Eagles might not have overly impressive numbers from their starters from an overall standpoint, but these guys have thrown well in the postseason. Righty Travis Moths (3.86) leads the charge. He has struck out 104 and walked 36 in 95.2 innings, while also attacks hitters with a fastball ranging 90-94 and up to 95 mph. He also has an average breaking ball that he works with. Marcus Evey is another talented arm to watch, and he has a 4.26 ERA in 76 innings, along with 86 strikeouts and 29 walks. Evey, too, can pound hitters with a fastball in the low-to-mid 90s, along with fringy breaking stuff. Meanwhile, Alex Hursey put together a strong start against Missouri State last weekend, striking out five and allowing just a run in a complete game performance. As for the Longhorns, righty Nolan Kingham is primarily a two-pitch guy with a fastball in the low-90s, along with a low-80s slider that sometimes can be a plus offering. Blair Henley (3.22) put together a strong start last week and can throw four pitches for strikes. He’ll sit in the upper-80s into the low-90s with his fastball, and typically keeps his pitches low in the zone. Shugart is another power arm, sitting low-to-mid 90s with the fastball, while also showing feel for a wipeout slider at times.  EDGE: Push

Bullpen: The Golden Eagles definitely don’t have a load of high quality pitching depth, but they do have one of the absolute best in our game in 5-foot-11, 170-pound, junior righthander Ethan Roberts. Roberts sits 88-92 with his fastball and will obliterate opposing hitters with a filthy cutter. Devin Lancaster is another quality option to watch. Lancaster (5.63) doesn’t have overpowering stuff, but he pitched well in the Oxford Regional last weekend, starting one of the games and keeping the hard-hitting Rebels off balance with his curveball. As for Texas, it will have an advantage anytime Chase Shugart is on the mound. Shugart, who was up to 95 with his fastball last weekend, has recorded two saves this season and has a 4.36 ERA in 84.2 innings. The Longhorns would like to bring him out of the bullpen in the series opener before turning the ball over to him to start the final game of the series should it go that long. Parker Joe Robinson (1.39) has become a funky-armed contributor, Andy McGuire (2.03) pounds the zone with strikes with an 88-91 mph fastball and lefty Josh Sawyer can be an effective setup guy with a fastball up to 95-96 mph. EDGE: Texas

Offense: What an impressive offensive lineup the Golden Eagles have. Some would say they’d expect them to go to the plate hacking, but nothing could be more false. The Eagles are experienced and show consistently strong approaches. TTU ranks 1st nationally in batting average, home runs per game (2.16), slugging percentage, on-base percentage and scoring. They also rank 10th nationally in doubles per game. Whew, that’s impressive. Chase Chambers is the ringleader of this offense, hitting .404 with 17 homers and 82 RBIs, while Kevin Strohschein has been terrific with a .386 average, 18 homers and 67 RBIs. There’s also Brennon Kaleiwahea, who’s hitting .376 with eight homers and 53 RBIs, while John Ham (.321), Nick Osborne (.319) and Collin Harris (.319) each have double digit home runs, while outfielder Alex Junior (.318) has 13 doubles, seven homers, nine hit by pitches and a whopping 52 walks. He’s also struck out 55 times this season. This is a balanced offense and the Golden Eagles have four sluggers with 40 or more walks. As for the Longhorns, everything starts with hard-hitting lefthanded hitter Kody Clemens (.346), who’s hitting 14 doubles, three triples, 21 homers and 68 RBIs, while Zach Zubia (.286) is another power surge waiting to happen with 11 homers and 43 RBIs. Also keep an eye on Petrinsky, who doesn’t have a high average, but who also can put a charge into the ball and give the Horns some power production.  EDGE: Tennessee Tech

Defense: The Longhorns have a clear advantage from a defensive standpoint. Texas ranks 21st nationally in the fielding department, while the Eagles are ranked 133rd with a .970 fielding percentage. For the ‘Horns, they are excellent up the middle with Hamilton and Clemens leading the charge. Hamilton is instinctual, makes all the tough and routine plays and has an accurate arm to first. Clemens is consistent as well. McKenzie is stable at first and Petrinsky has been a more than adequate backstop for the Longhorns. In the outfield, Ellis is athletic and can run balls down and Shaw is a steady center field. The Longhorns aren’t going to beat themselves. As for TTU, it is certainly not a flashy defensive club, but as one coach said in our scouting reports, it tends to make most of the routine plays. EDGE: Texas

Experience/Intangibles: The Golden Eagles are playing with house money right now, and that’s scary for any opposing team entering a winner takes all three-game series. TTU looked very good at Ole Miss last weekend, but wil they emulate that performance against this weekend? We’ll find out. As for Texas, the Longhorns have been very good at home down the stretch and had a flare for the dramatic last weekend at Disch-Falk Field. The atmosphere in Austin last week was fantastic, and I’d expect that to continue this weekend. Texas gets the edge in this department. EDGE: Texas