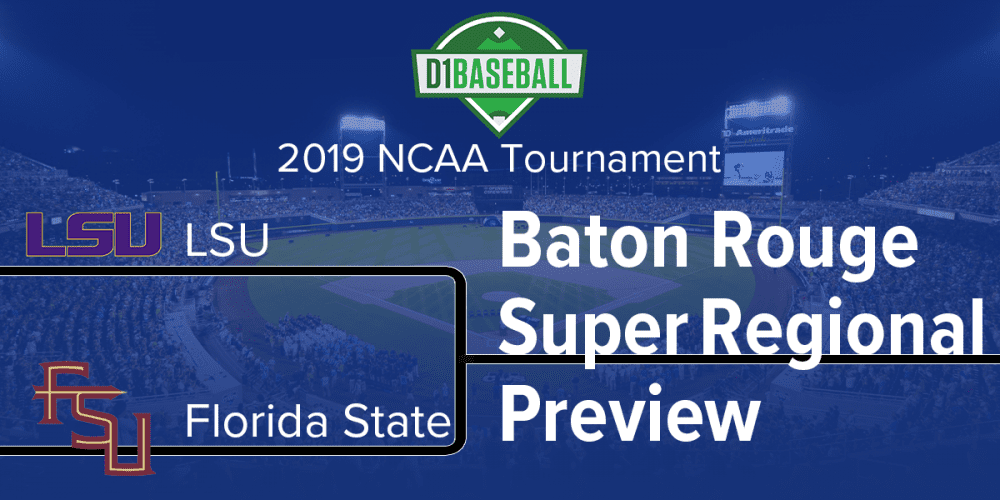 Remember when Florida State was a team just trying to get into the NCAA tournament? It wasn’t that long ago the Seminoles were in serious trouble to make the tournament. Now, they’re two wins away from reaching the College World Series in Mike Martin’s final season with the program. FSU was inconsistent throughout the regular season, but played a very impressive brand of baseball against Georgia and others at the Athens Regional last weekend. FSU is playing at a very high level and like a team with some extra motivation to win for its skipper.

How LSU Got Here

LSU wasn’t inconsistent to the extent of Florida State during the regular season, but it is just now playing its best brand of baseball. LSU started to turn on the jets at the SEC tournament … shocker, right? The Tigers played a very impressive brand of baseball at the Baton Rouge Regional last weekend, going 3-0 with a pair of wins over Southern Miss. The big key for LSU the past two weeks has been the emergence of a pitching staff that received warranted criticism much of the season. All the pieces are coming together at the right time for Paul Mainieri’s club.

There was a point earlier this season when Florida State was an absolute disaster when it comes to the starting rotation. But Parrish’s strong start at the ACC tournament might’ve been the surge this team needed. Parrish has been terrific ever since and he has that filthy fastball and changeup combination, while fellow righty CJ Van Eyk has impressive stuff, getting up to 96-97 mph with his fastball last weekend in Athens. Van Eyk also can throw multiple pitches for strikes. Then there’s workhorse righthander Conor Grady, who was dubbed the “silent assassin” in our coach takes. As for LSU, this series is all about the two freshmen — Cole Henry and Landon Marceaux. Marceaux showed really solid stuff against Stony Brook last weekend, while Henry pitched like a man possessed at times last weekend, sitting 92-95 mph with his fastball, with most of those fastballs in the 94-95 mph range. Eric Walker might not be the greatest matchup against Florida State with his mid 80 fastball, along with the slider and changeup, but he does have the experience needed in series such as these. We know Van Eyk is a premier talent, and we also know Parrish entered the season with high hopes and scuffled much of the year, but he’s now found the right formula.

Remember when the LSU bullpen was an absolute mess? Well, things have stabilized with hard-throwing righthander Zack Hess returning to his ‘Wild Thing’ persona and back to the bullpen. Hess was electric last weekend despite allowing a grand slam, sitting 93-95 mph with his fastball along with the typical, filthy 80-82 mph power breaking ball. Fellow righties Devin Fontenot and Todd Peterson both have big-time velocity with Fontenot getting up to 95 last week while Peterson topped out at 96 mph. Trent Vietmeier, who at one point this season, was thought to likely miss the season with an injury, is back and was up to 94-95 mph as well last week, while Matthew Beck is another weapon for this LSU bullpen. Beck sat 88-90 mph with his fastball against Baton Rouge Regional competition, while his calling card is a filthy 12-6 curveball. There are plenty of instances where the LSU bullpen has teetered on the edge of disaster, but this unit seems to be coming together at precisely the right time. Florida State has plenty of weapons in the bullpen, too, with Flowers, Clayton Kwiatkowski and Chase Haney, among others, leading the charge.

The Seminoles might be ranked in the 100s from a batting average standpoint, but that’s not even close to to telling the full story with this lineup. FSU hit the cover off the ball last week at the Athens Regional and ranks 17th nationally in home runs per game, 25th in slugging percentage and 15th in on-base percentage. Mike Salvatore (.341) was outstanding last weekend and can hit for power. He’s the table setter for this offense, while Robby Martin (.340) has definite gap power with a consistent and mature offensive approach, while Drew Mendoza has an ability to bust games wide open. Mendoza (.320) has double digit doubles and 16 home runs on the season. Reese Albert (.308) is another quality hitter who can hit for power, while former walk-on Tim Becker is another interesting bat to watch. Becker stepped up in a big way against Georgia last weekend and we’ll see if he can carry the mojo into Alex Box Stadium. There’s also J.C. Flowers while Matheu Nelson is more than capable of running ball into the gap or even out of the yard. As for LSU, the Tigers can be a little streaky offensively, but it all boils down to what Josh Smith and Zach Watson can accomplish this weekend.

The key to this series is pretty simple for Florida State — it must play better defense. FSU enters the weekend with one of the worst defensive units in college baseball — ranked in the 200s with a dismal .964 team fielding percentage. LSU certainly has a huge advantage in this category, where it’s ranked 40th nationally with a .977 fielding percentage. Hal Hughes is a high-quality defender at the hot corner and Brandt Broussard does a nice job at second base. Shortstop Josh Smith is clearly the best defender in the infield with good instincts and actions and an accurate arm to first base. Meanwhile, the outfield is in strong shape with Daniel Cabrera, Zach Watson and Antoine Duplantis. Watson is an athletic and speedy guy who can track down anything, while Duplantis has speed and takes excellent routes to the ball. LSU isn’t going to beat itself from a defensive standpoint, but the same can’t be said about FSU.

Florida State has some extra motivation entering the weekend. Obviously, the Seminoles want to help Mike Martin head out in style with another trip to the College World Series. However, LSU gets the advantage in the intangibles department. The Tigers have some youth in the rotation, but the offensive lineup is littered with experienced veterans who are ready to take LSU back to Omaha. There’s also a sizable home advantage for the Tigers, where they’re 30-8 at Alex Box Stadium this season. Look for FSU to play loose away from home, but LSU still gets the nod here.