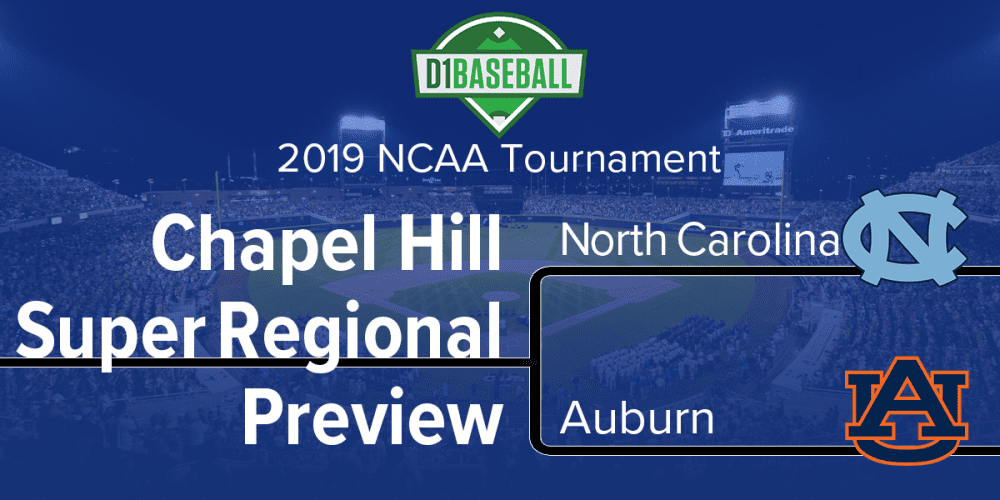 How Auburn Got Here
Schedule and Results | Team Stats and Leaders

After losing a host of key players from last year’s super regional team, Auburn has had to grind its way to a 33-25 overall record and a 15-18 showing in the SEC, counting a 1-2 week at the conference tournament. Credit Auburn’s fine coaching staff with finding a way to get this team back to super regionals despite key injuries on the mound: flame-thrower Davis Daniel has missed the whole season, lefty Jack Owen missed a big chunk of time in the middle of the season, and ace Tanner Burns missed time down the stretch with shoulder soreness. On top of that, the three most talented players in Auburn’s lineup struggled at the plate for most of the season, as Will Holland, Steven Williams and Edouard Julien are all hitting below .250 and each has a sub-.800 OPS. But all three of them had strong weekends at the Atlanta Regional, highlighted by Williams’ walk-off three-run homer in the ninth to beat host Georgia Tech on Saturday. That big swing helped the Tigers win the regional in three games.

How North Carolina Got Here

The Tar Heels returned plenty of power arms and several key bats from last year’s Omaha team, and some stellar freshmen helped plug a few holes, allowing UNC to snag a home regional for the third year in a row. That hosting opportunity was in doubt after UNC lost its final series at home against NC State, but the Heels rebounded to play outstanding baseball during a 4-0 run through the ACC tournament, propelling them back into the top 16. This North Carolina team has had its share of challenges — shaky defense, sometimes-erratic strike-throwing, and the loss of rotation stalwart Luca Dalatri to injury — but still grinded its way to 42 wins and a 21-13 aggregate ACC record. Then UNC rode its red-hot offense to a 3-0 showing in regionals, extending its winning streak to seven games in the process.

If Tanner Burns were completely healthy and in midseason form, this category would be close. But Burns missed time in May (including the SEC tournament) with shoulder soreness, and he exited after three rocky innings in regionals, leaving his status cloudy once again. Auburn has announced it will start lefthanders Jack Owen (4-2, 2.46) and Bailey Horn (4-0, 6.10) in the first two games, with Burns possibly an option out of the bullpen and Monday TBA. It helps to have lefthanded pitching against the Tar Heels, so the Owen and Horn have a chance to keep UNC’s potent offense at bay, especially since Horn is peaking at the right time, coming off six innings of two-hit, shutout ball against Georgia Tech.

But the Tar Heels have a super-talented second-round pick fronting the rotation in the electric Tyler Baum, who features a 93-96 fastball, a power curveball that flashes plus and a solid changeup. When he commands the zone — and he’s done a good job with that down the stretch — he’s capable of dominating. Fellow junior righty Austin Bergner also has power stuff, with a 91-94 fastball and a plus changeup, though his breaking ball and control have been inconsistent. Bergner came through with seven innings of two-run ball in the regional clincher against Tennessee, an encouraging sign for the Heels heading into this weekend. Freshman lefty Will Sandy serves as more of an opener who will get the Heels into the third or fourth inning and then hand off to the outstanding bullpen.

Auburn’s bullpen is built around sophomore righty Cody Greenhill (3.23 ERA, 11 SV), a big ox who simply overpowers hitters with a high-spin-rate fastball that can bump the  mid-90s. Jr. LHP Elliott Anderson is another weapon against UNC’s lefthanded hitters, with an 88-90 fastball and a good 78-80 slider that eats up lefties. And loose-armed freshman lefty Brooks Fuller has good sink on an 86-89 fastball along with a nice, sharp curveball at 75-78, making him another good weapon against lefties. Ryan Watson and Richard Fitts give the Tigers a pair of righties who can work multiple innings — Fitts went six shutout in relief of Burns on Saturday. It’s become a capable enough bullpen group after struggling earlier in the year, but it’s far from elite.

The Tar Heels have a clear advantage in this category as well, ranking 20th in the nation in scoring (7.4 runs per game), while Auburn ranks 138th (5.8 runs per game). North Carolina has ridden a power surge through the postseason, hitting 14 homers in its last six games dating back to its second conference tournament game. ACC freshman of the year Aaron Sabato (.341/.342/.677, 16 HR) and first-round pick Michael Busch (.290/.441/.567, 16 HR) give UNC a pair of premium sluggers who can both drive the ball out to any part of the ballpark, and both are tough outs. Danny Serretti, Ike Freeman and Ashton McGee form an outstanding supporting cast, and all of them are hot. Veterans like Brandon Martorano and Dallas Tessar also have shown a knack for delivering timely hits, and Dylan Harris is a hard-nosed spark plug. As always, UNC is exceptionally patient at the plate and leads the country with 388 walks.

The Tigers are a different team when Williams, Holland and Julien are locked in, as they were in regionals — especially the first two. Underclassmen Judd Ward, Ryan Bliss and Kason Howell bring exciting athleticism and speed to the mix along with Holland. Conor Davis and Rankin Woley provide veteran presence and physicality. This team will grind out at-bats and manufacture offense by any means necessary, but it’s not a scary lineup unless the Williams-Holland-Julien trio is rolling.

Defense has been UNC’s most glaring weakness this year, as the Tar Heels are fielding just .968 (146th in the nation). This team is simply prone to lapses in concentration and tends to make errors in bunches — but the defense has been better the last two weeks. Serretti and Freeman are good on the left side of the infield, but second base has been a problem spot, and the Tar Heels do a poor job controlling the running game, throwing out just 15.5 percent of basestealers.

Auburn’s defense is built around Holland, an elite talent at shortstop with premium range and a strong arm, though he’s fielding a modest .942, in part because he gets to balls that other shortstops can’t reach. Bliss gives him a super-athletic and reliable double play partner, and catcher Matt Scheffler does a great job handling the pitching staff, though he’s thrown out just 10 of 66 basestealers. Howell and Ward have excellent range in the outfield.

Toughness has carried Auburn a long way this year, helping the Tigers overcome adversity all season long. They played with heavy hearts last weekend after the tragic death of longtime radio voice Rod Bramblett and his wife in a car wreck, but they did a good job channeling their emotions in regionals. The Tigers have plenty of holdovers from last year’s super regional run, and they’ve proven they can win on the road at ACC venues in the postseason, having won a regional at NC State last year and another at Georgia Tech last week.

But UNC is well stocked with College World Series veterans, led by Busch, Freeman, McGee, Martorano, Bergner, O’Brien and Lancellotti, all of whom have valuable experience on the sport’s biggest stage. Boshamer Stadium is no SEC venue, but the Tar Heels do play very well at home, where they went 31-6 in the regular season. Auburn went 10-12 on the road.

AN OPPOSING COACH BREAKS DOWN AUBURN 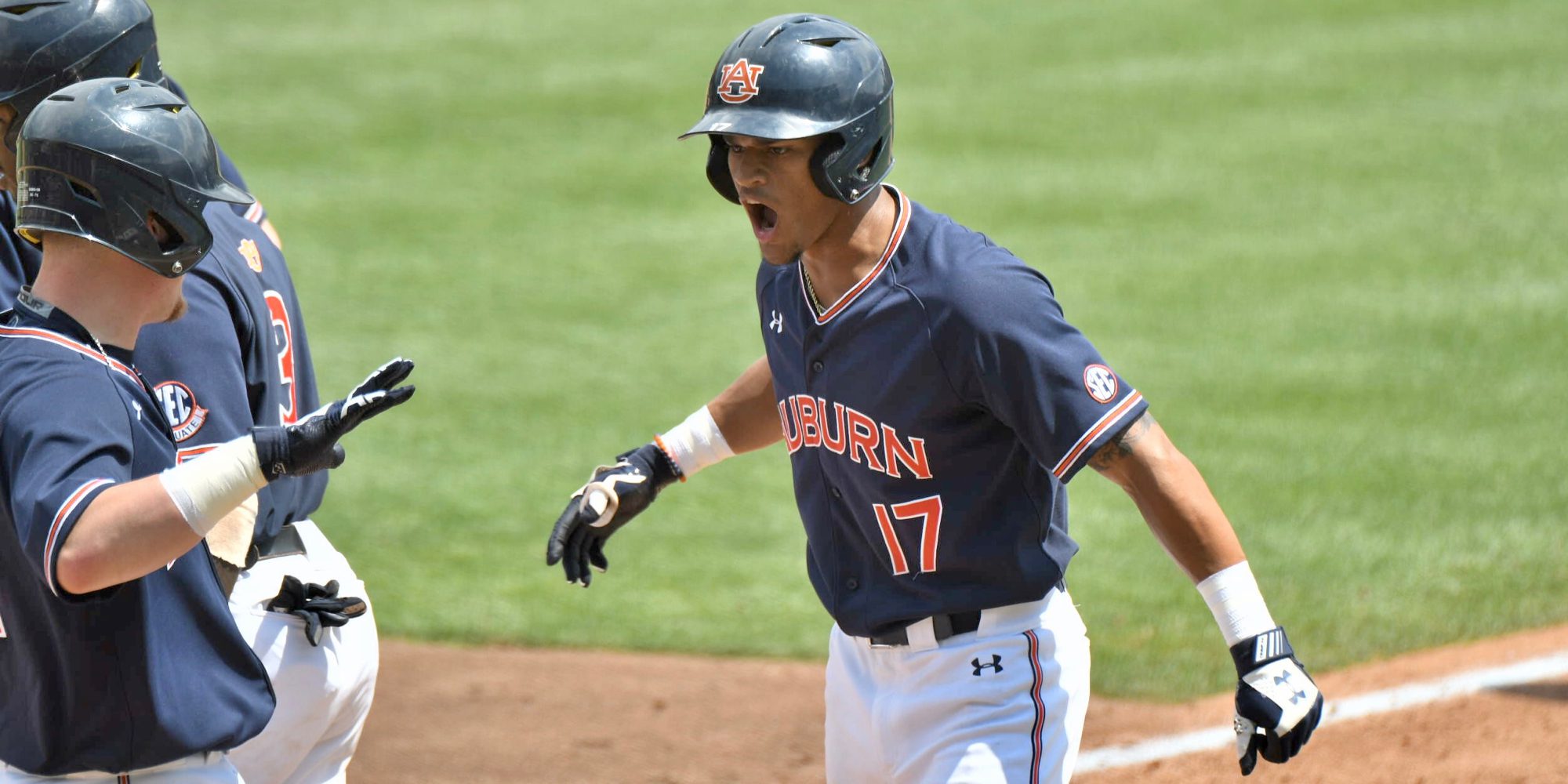 “They’ve got good culture over there. They go about their business in a real cool and calm manner, and I think they’re an easy team to root for. …