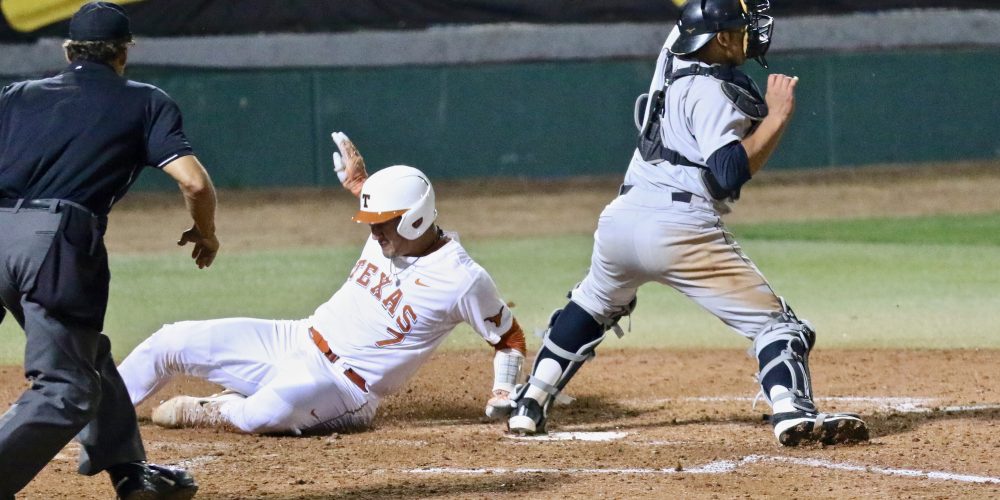 David Banuelos blocks the plate with his foot. (Shotgun Spratling)

LONG BEACH, Calif. — Normally, you move out of the way when a freight train is barreling toward you. David Banuelos shifted into its path.

With the bases loaded in the fifth inning of the Long Beach Regional championship, Texas senior Zane Gurwitz had lined a game-tying hit past a diving Ramsey Romano at third base. Cantu was trying to make it a go-ahead single. With Romano still getting to his feet, a short cutoff throw went to shortstop Laine Huffman, who fired home.

Cantu had slightly bowed his path to home as he rounded third and was heading for the back corner of the plate. Banuelos patiently watched as Huffman’s relay headed his way. His left food remained in fair territory until the last moment, but as he reached up his glove to catch a throw above his head, Banuelos also javelined his left leg toward the same back corner Cantu had aimed for.

“You certainly want to take away the point of the plate and [Banuelos] did it to a T,” Long Beach State head coach Troy Buckley said.

Banuelos stamped his cleat atop the home plate corner just as Cantu was attempting to slap the plate with a reach-back slide. Cantu only managed to tag Banuelos’ shin and shoe top. Home plate umpire Perry Costello was in perfect position.

The initial sweep of Banuelos’ glove missed Cantu, but after Costello made no safe or out call, Banuelos went back and applied a tag on Cantu, who initially motioned “safe” before seeing the same from Costello and unsuccessfully tried to return to the plate. Banuelos had stood on the tracks and Jesse James’d the Cantu Express.

The Blair Field crowd erupted — jubilation from one side, repugnant groans from the other. Cantu was in disbelief. Mouth agape, he pulled his helmet off. He took two steps and pointed back to home. “Oh my god! I touched the plate,” he screamed at Costello.

The umpire responded with only one word: “No.”