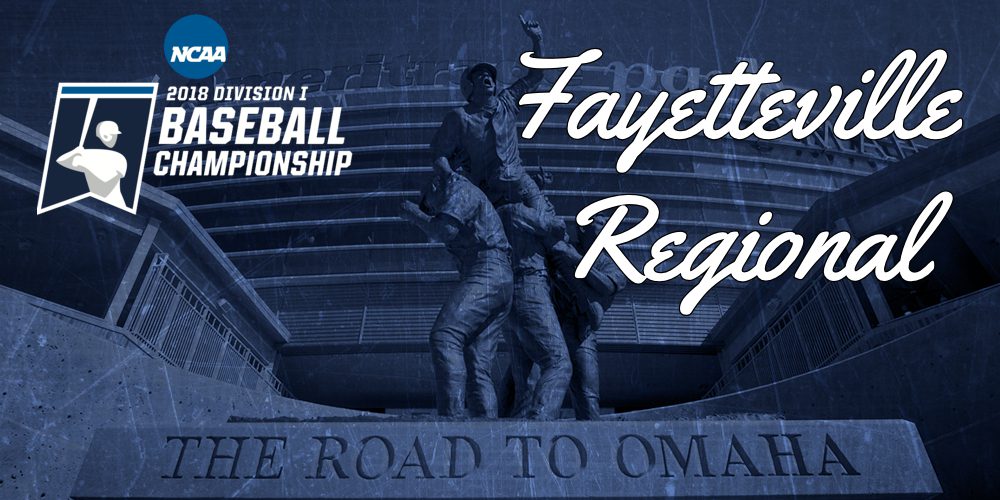 Most Exciting Player: Casey Martin, Arkansas. The talented freshman slugger has had quite the inaugural season for Dave Van Horn’s club. In addition to being a premier hitter for the Hogs, he’s also mighty impressive at the hot corner. What a bright future Martin has with the Hogs and likely at the next level at some point.

Best Hitter: Devlin Granberg, Dallas Baptist. The Hogs and Golden Eagles have plenty of exciting players, but no one in this regional can turn around a game as quick as Granberg. Granberg is one of the nation’s most complete hitters, entering the weekend with a .426 average, 16 doubles, two triples, 11 homers and 65 RBIs. If he gets going, watch out …

Best Defensive Player: Jameson Hannah, Dallas Baptist. Hannah might be the best overall athlete in this regional, and he’ll showcase his athleticism in the outfield this weekend. Hannah has premium speed and took excellent routes to the ball when we saw him earlier this season.

Best Pitcher: Nick Sandlin, Southern Miss. While it’s tough not to go with Arkansas’ Big-Game Blaine Knight here, you have to give the edge to Sandlin. The veteran righty is having an incredible year with 1.13 ERA in 95.1 innings, along with 134 strikeouts and just 15 walks. Also, teams are hitting him at a .166 clip.

X-Factor: Dominic Fletcher, Arkansas. Fletcher was hitting around .170 at one point earlier this season, and is now up to .289 with solid power numbers. Fletcher has a chance to break a game open at the plate, while he’s a premier defender in the outfield.

Best Starting Rotation: Arkansas. Dallas Baptist and USM can get a little light on the mound as the weekend progresses, but the Hogs have the most upside. Blaine Knight is as consistent as it gets in this type of atmosphere, while lefty Kacey Murphy has a 3.15 ERA and righty Isaiah Campbell put together a strong start at the SEC tournament last week. The Hogs appear to be just right rotation-wise entering the weekend.

Best Bullpen: Arkansas. Yet again, the Razorbacks get the edge in a very important area. Righty Jake Reindl has asserted himself as one of the better relievers in the league with 57 strikeouts in 44 innings, while lefty Matt Cronin is finally back and healthy from Mono. There’s also Barrett Loseke, who has strong numbers.

Best Offensive Team: Arkansas. The Hogs have been unbelievably good at home throughout the season with just three losses at home. The big difference? Arkansas tends to go hog wild at home from an offensive standpoint. U of A has four sluggers with double digit homers, while it has six everyday hitters batting over .300.

Best Defensive Team: Dallas Baptist. The Patriots lead this field in the defensive department. Hannah, of course, headlines the outfield with his elite defensive skills, while Tim Millard and Jimmy Glowenke are extremely steady, key pieces for Dan Heefner’s club. DBU does things well from a defensive standpoint.