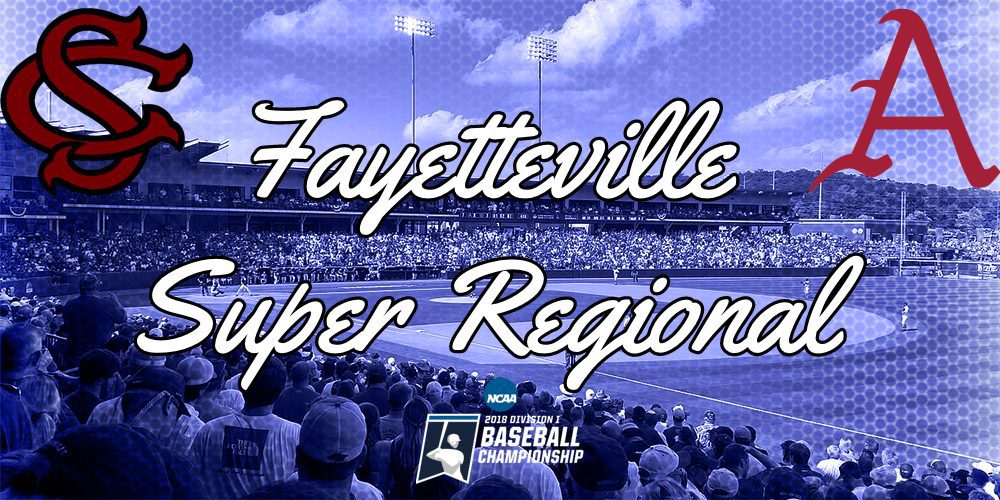 How South Carolina Got Here: The Gamecocks have been playing at a high level the past few weeks, and head into Fayetteville with a full head of steam. South Carolina swept through the Greenville Regional, beating Ohio State 8-3 in a comeback win, while also beating East Carolina 4-2 and finishing things off with an 8-4 win. Mark Kingston’s club is playing a strong brand of baseball at the right time.

How Arkansas Got Here: The Razorbacks did pretty much what was expected in the Fayetteville Regional this past weekend. The Hogs crushed Oral Roberts and Southern Miss by a combined score of 20-4 before they took care of Dallas Baptist in the championship game, 4-3, quelling the Patriots’ hard-hitting offense.

Starting Pitching: The Gamecocks and Razorbacks have both had their share of issues in the starting rotation this season, the Hogs mainly just having some inconsistencies with the No. 3 starting spot. But the Hogs get the advantage in this department with a strong one-two punch in righty Blaine Knight and lefty Kacey Murphy. Knight (2.74) has struck out 88 in 95.1 innings and will sit 90-93 with his fastball, while also showing excellent feel for a slider and continuing to show a sharper curveball as the season progresses. Murphy has been a steady arm for the Hogs the past few weeks, sitting in the upper-80s and into the lower-90s, while also showing good command of his secondary stuff. Murphy has walked just 16 in 88 innings. There’s also righty Isaiah Campbell, who continues to be up and down. Campbell was lifted last week after not recording an out in the first inning. He has an electric fastball and a quality slider, but again, consistency is an issue with an ERA north of four in 58.1 innings. As for the Gamecocks, righty Adam Hill can be dominant and iffy. Hill has a 3.99 ERA in 79 innings along with 98 strikeouts. He has an electric fastball and can blow hitters away from a downhill angle. However, he also has command issues at times with 50 walks. Cody Morris (3.68) is another solid arm for the Gamecocks. Morris put together a strong start in last week’s Greenville Regional and has struck out 83 in 78.1 innings. There’s also Carmen Mlodzinski. Mlodzinski has a fastball well into the mid-80s with solid secondary stuff. Though he’s only pitched 44.2 innings, he has the type of electricity to tame Arkansas’ bats.  EDGE: Arkansas

Bullpen: I actually like both bullpens entering the weekend. The Gamecocks have several impressive bullpen weapons, and pitching coach Skylar Meade has an ability to mix and match after the fifth or sixth innings. Sawyers Bridges (1.20) is a quality arm who will not walk people in most instances, while TJ Shook (2.33), John Gilreath (4.03) also have put together consistent performances. There’s also Eddy Demurias, who just has a knack of making big pitches in big situations, while Graham Lawson has evolved into a premier weapon over the past few weeks. Lawson will get up to 94-95 with his fastball, while also showcasing a wipeout slider at times. The Hogs got a big boost to the bullpen when lefthander Matt Cronin returned from Mono. Cronin has a fastball in the 91-95 range and will move that FB around the zone. He’ll also keep hitters at bay with secondary offerings, but everything is predicated on that fastball. Jake Reindl (2.47) has become a dominant bullpen arm for the Hogs this season. Reindl actually had to go extended relief in last week’s regional and shined. Barrett Loseke (3.35) is another quality arm to watch, while Kole Ramage (3.56) isn’t a blow-away type of pitcher, but will attack hitters with a decent fastball and slider combination. EDGE: Push

Offense: The Gamecocks have done more than enough offensively as of late, and it’s a solid unit, ranked 18th nationally in home runs per game at 1.20, while also being ranked 77th in scoring with 6.3 runs per game. However, how about the Hogs? Arkansas ranks 17th in batting average (.300), third in home runs per game at 1.50 and 21st in scoring. For the Gamecocks, Madison Stokes (.331) can put a charge into the ball with 10 homers on the season, while Carlos Cortes is a tough guy to pitch to and has 15 homers and 44 RBIs. Justin Row is a gritty hitter with a consistent approach, a .345 average and 12 doubles. He also doesn’t strike out a lot. LT Tolbert (.322) is another guy who doesn’t strike out a lot and tends to make consistent contact, while Danny Blair (.245) has had a flare for the dramatic as of late. As for the Hogs, it doesn’t get much better than this offensive unit. Kjerstad (.344) and Martin (.336) headline the lineup with a total of 26 homers, while veterans Carson Shaddy (.331) and Eric Cole (.328) are both athletic guys who hit for serious pop — they have a combined 25 homers as a duo. Jared Gates has played much better the past few weeks than his average (.248) would indicate, while Grant Koch can beat you with some power and Dom Fletcher is an electric overall player who has played well the past couple of months. Fletcher definitely has some swing and miss in his bat, but also has tallied 14 doubles, eight homers and knocked in 39 runs. EDGE: Arkansas

Defense: Both of these teams are more than capable of playing premier defense, but the Gamecocks definitely have the edge. South Carolina ranks fourth nationally (.982) in fielding percentage and it’s a strong club across the board. LT Tolbert has been a steady and instinctive shortstop throughout the season, while veteran Justin Row is a gritty second baseman who makes most plays look relatively easy. Jonah Bride is very good at the hot corner, while the Gamecocks tend to set their outfield defense up to their advantage as games progress. As for the Hogs, getting shortstop Jax Biggers back from an injury has helped, while freshman Casey Martin just continues to get better and better on the left side of the infield. Heston Kjerstad also continues to improve in the outfield, while Dominic Fletcher is as good as it gets in center and Eric Cole is sneaky athletic in right field. Though the Hogs are ranked 100th nationally in fielding, they aren’t a team that consistently hands you baserunners with poor defense.

Experience/Intangibles: I’ve really enjoyed seeing how business-like the Gamecocks have approached things over the past few weeks. South Carolina expected to win that regional last week, and so, it will have plenty of confidence entering the weekend. With that said, it’s incredibly difficult to go against the Hogs at home, where they’re 33-3 this season. The Hogs are loaded with experienced players and are at home this weekend. They should take care of business, but keep an eye on these hard-nosed and focused Gamecocks. It wouldn’t be that shocking to see Mark Kingston’s club make a trip to Omaha.. EDGE: Arkansas