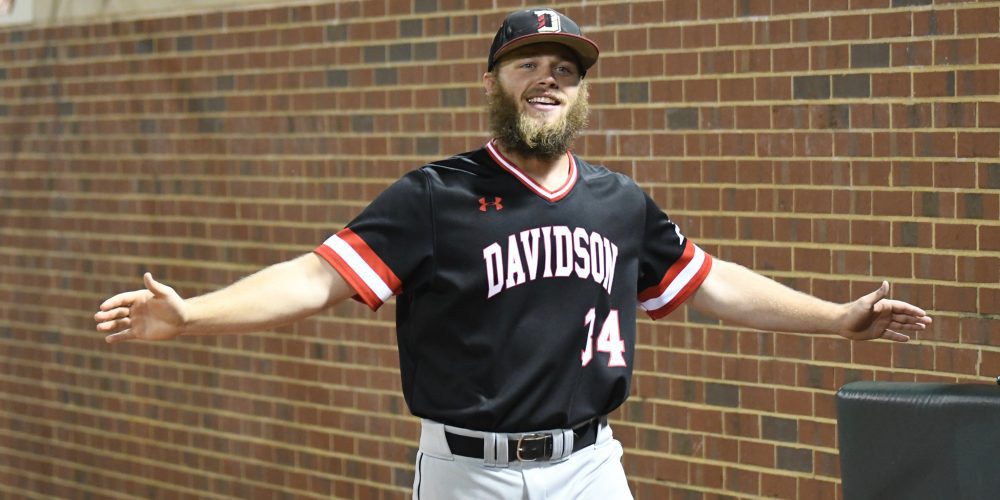 CHAPEL HILL, N.C. — In Friday’s early game at Boshamer Stadium, Florida Gulf Coast made its NCAA tournament debut with a win against Michigan, prompting coach Dave Tollett to call it the biggest win in program history.

Fast-forward a few hours, and that phrase came up again — albeit more improbably. The only other team in the field of 64 making its NCAA tournament debut was Davidson, the No. 4 seed in Chapel Hill, where the Wildcats drew a daunting assignment: a matchup against No. 2 national seed North Carolina. On top of that, the 47-12 Tar Heels didn’t get cute — they threw ace J.B. Bukauskas, the ACC pitcher of the year and a likely top-10 overall pick in the upcoming draft, in the opener against the Wildcats.

And Davidson just plain took it to Bukauskas and the Tar Heels. Bukauskas entered the game 9-0, 2.02 on the year, but he exited the game 9-1, 2.53 after allowing six earned runs on six hits and four walks over 3.2 innings. Davidson jumped him for three runs in the second inning and never looked back, rolling to a monumental 8-4 upset victory.

But those were midweek wins in the regular season. This was an NCAA tournament victory against one of the nation’s best teams and best pitchers, on that team’s home field. As the end of the game approached and the likelihood of Davidson’s impending upset began to set in, I ran into a former employee of the Davidson athletics department who had driven nearly 500 miles to watch the Wildcats this weekend. He reflected upon the incredible contrast between the low point of September 2012, when Cooke was nearly killed when his vehicle was struck by a drunk driver, and the high point of June 2, 2017. 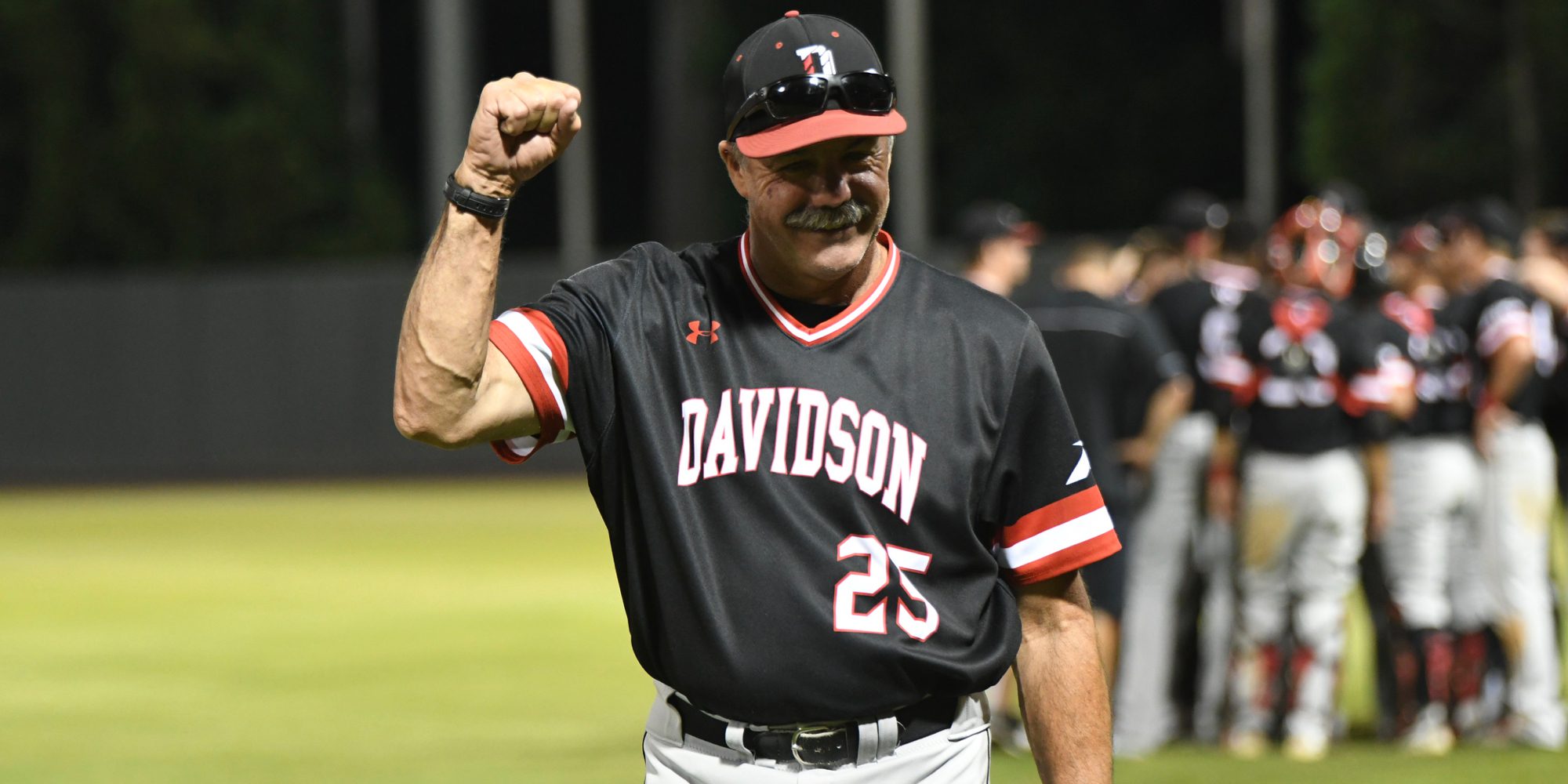 Cooke is one of the most respected figures in college baseball, with a vibrant coaching tree that includes Duke’s Chris Pollard, Notre Dame’s Mik Aoki, Oklahoma’s Pete Hughes and Columbia’s Brett Boretti. He’s all class, and even North Carolina coach Mike Fox admitted that his own disappointment was tempered by his respect for for Cooke.

“My hat’s off to Dick and his club,” Fox said. “I’d rather not be their first win in the NCAA tournament, but… 115 years, that’s a long time (for the program’s first NCAA tourney win). Dick’s a great baseball man — he’s a great man, obviously survived a horrific car crash. And I know how he’s feeling right now. I just want to acknowledge that first. They outplayed us pretty much from the first pitch to the last, and they deserved to win.”

North Carolina hasn’t been outplayed very often this year, but Davidson was loose, confident and aggressive. Fox pointed out that Bukauskas didn’t miss a lot of bats with his mid-90s fastball, and his slider was either really good — or it wasn’t. And when it wasn’t, the Wildcats either laid off it out of the zone or hammered it. Certainly Bukauskas didn’t have his best command, or anything close. A hit batsman jumpstarted Davidson’s three-run rally in the second, and three straight walks ended Bukauskas’ day in the fourth inning.

But the tone was set in the second, when Brett Centracchio gave Davidson the lead with an RBI double off the center-field wall and Cam Johnson followed with a two-run single to right two batters later.

“There are some times when pitchers don’t throw great, and I think (Bukauskas) would tell you, this was not his best night, regardless of how we swung it,” Cooke said. “So I think we took advantage of him not having his best night. There are some times with pitchers like that, you get so overwhelmed that they don’t have their best night and you still come out of there with no runs in six innings. So we get a couple across, and he struggled to get the breaking ball over there for a while, and then we served one — I just think we kind of stayed relaxed and said, ‘We can do this.’ Someone turned around a 3-0 fastball — it was Centracchio, here’s the 8-hole hitter, freshman DH, and he cranks it off the center field wall. I think that’s one of those things that the whole club kind of went, ‘Wow. We’re on this guy.’”

Alec Acosta, who had one home run in his first three seasons before hitting five of them during Davidson’s six-game run to the A-10 tournament championship last week, led off the third with a double, leading to another run. Then Davidson chased Bukauskas and broke the game open with two more in the fourth, and tacked on two more in the fifth, sparked by catcher Jake Sidwell’s leadoff single (his second hit of the game). 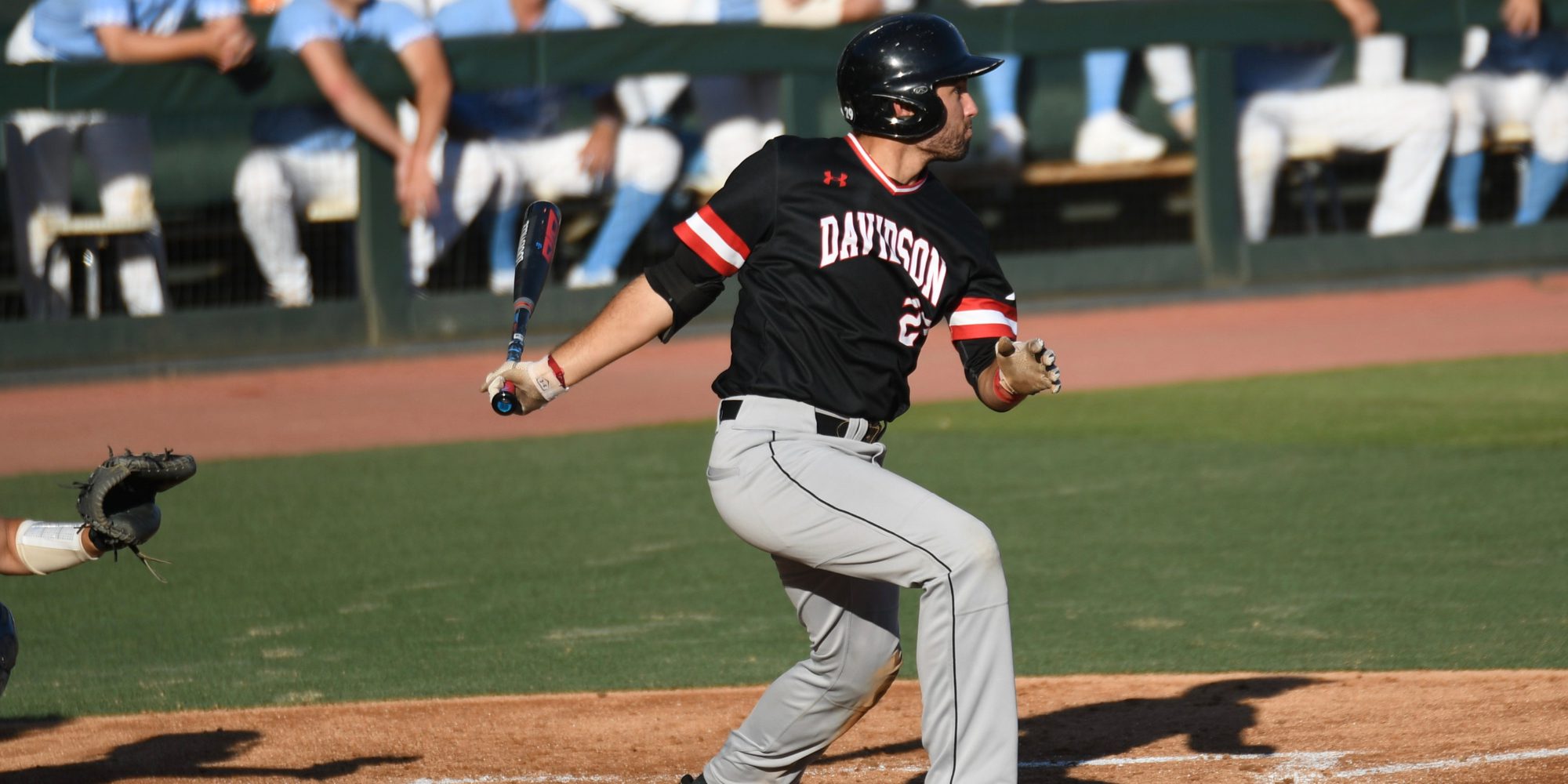 “We’re just trying to have fun right now. We’re playing with house money, that’s our feeling right now,” Sidwell said. “We’re just going out there and having fun, staying loose. If we win, we win, it’s a blast, and we’re just hoping to extend the ride as long as we can.”

O’Linger is doing all he can to extend his college career a little longer each time he takes the mound. The fifth-year senior knows his baseball career will be over as soon as Davidson’s run is over — he’s a standout student who will being pharmacy school at the University of Florida in the fall. So he threw 236 pitches over 14.1 innings last week in the A-10 tournament, and he was back on the mound to start the regional on Friday, when he threw 94 pitches over six innings of three-run ball.

“I got a very caustic email from the coach of the pharmacy school baseball team at the University of Florida questioning why I’ve been running Durin out there so many times, why he’s throwing so many pitches,” Cooke quipped. “He’s afraid it might impact him next spring down there …

“I’m not going to be the guy that will have Durin go to his grave or have me go to the grave saying, ‘You know, Durin could have pitched against VCU that day, but I wanted to make sure I wasn’t…’ It’s an inexact science, and we’re taking that to a different level. I told him after he threw 256 (pitches), ‘Hey that’s like an average day in Japan,’ and laughed. If Durin were going to be drafted, we wouldn’t do that, but these guys want to compete.” 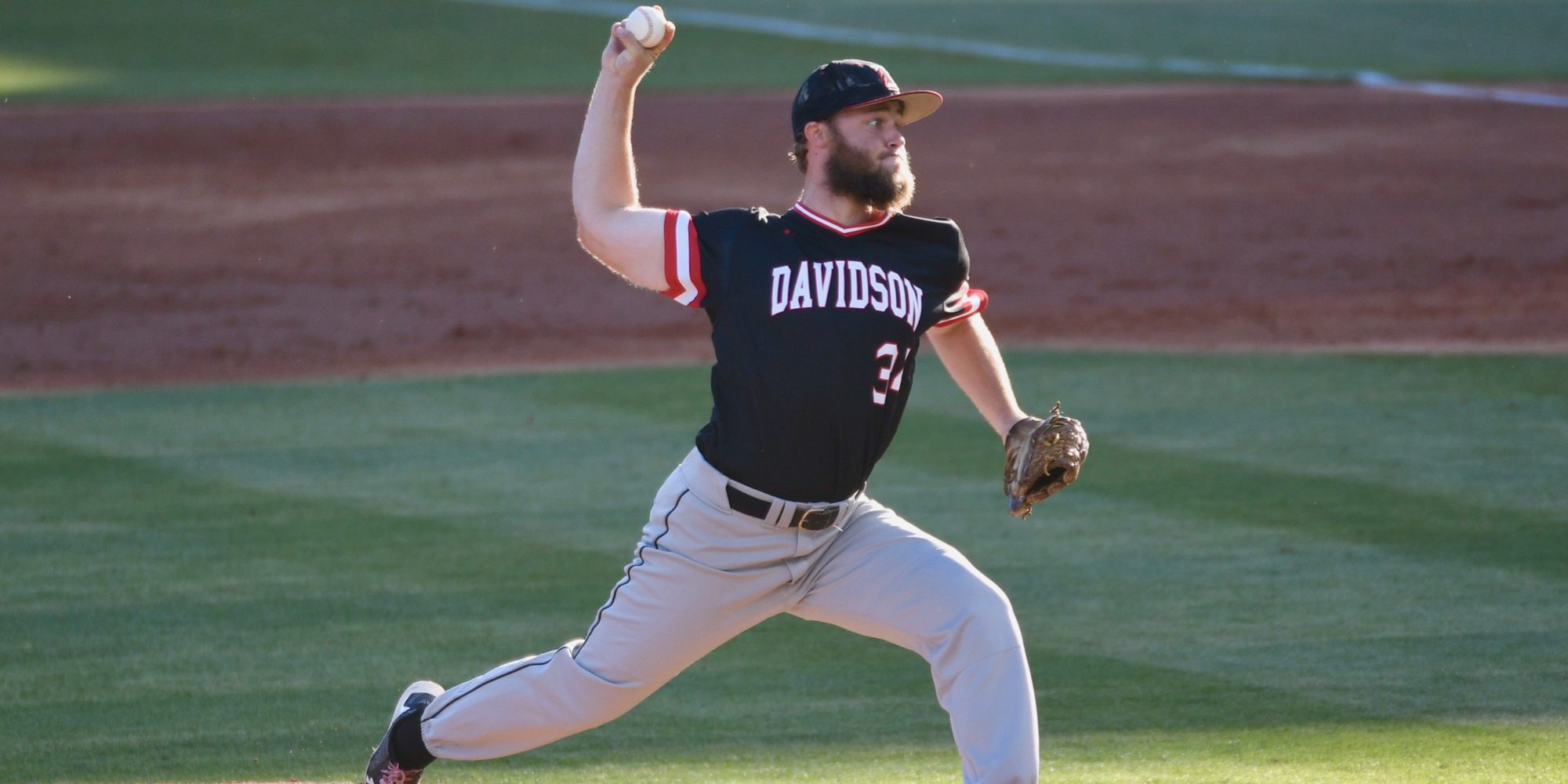 O’Linger knows that his elevated pitch counts have invited scrutiny from outsiders, even though he has no professional baseball ambitions. But this magical run is more important to him — and the 23-year-old is an adult who can make that decision for himself.

“Honestly, people are going to say stuff. You’re always going to have haters. That’s fine with me. I don’t know them, I don’t really care,” O’Linger said. “To be honest, I know my limitations and I know what my body can do, and I know that this is it for me. I will throw until my arm blows out or until (Coach Cooke) stops running me out there.”

After last week’s breathless run to the A-10 tournament title, Davidson doesn’t exactly have a lot of fresh arms left for the rest of this weekend, and Cooke made it clear that he isn’t going to treat any of his other arms the way he has handled O’Linger. So as sweet as Friday’s victory was for Davidson’s coaches, players and all the alumni who traveled from around the country to watch the Wildcats on Friday — and there were quite a few of them — Cooke now has to turn his attention to figuring out how to win a couple more games in Chapel Hill, starting with Saturday’s winners’ bracket game against FGCU.

“We talked about it — we didn’t win this regional tonight either,” Cooke said. “We gotta tee it up, and we’re gassed still pitching-wise. All the guys who are going to throw for us threw a lot in St. Louis (in the conference tourney), so we’re gonna have to get some great outings and we’re gonna have to score runs.”

But however it plays out, Cooke, his players and the Davidson faithful will cherish the ride.

“I’m telling you, I’m sitting back as fan watching and going, ‘This is kind of fun.’ The level of calmness that I had tonight was for me extraordinary in this kind of environment,” Cooke said. “Even late. We blew a game against them a few weeks ago that I lost some sleep over, so I’m sitting here tonight going, ‘Ehh, everybody remembers that.’ And all of a sudden we’re throwing the ball in the strike zone and making some plays, and I’m truly being a fan.”

And the impromptu Davidson reunion has been awfully festive. The red-clad cheering section down the first base line was loud from start to finish Friday, and it was fairly large for a visiting section at a regional.

“I spent some time with some former players during the first game that I haven’t seen for 15 years. Where they’ve come in from for this ball game has been kind of extraordinary, really a testament to the bond that these guys developed as players,” Cooke said. “Whether we win a lot or lose a lot, there’s just something that happens at our place. My wife would say folks drink that Davidson Kool-Aid, and it’s kind of extraordinary.”

And on Friday, all those Kool-Aid drinkers got to witness something extraordinary.