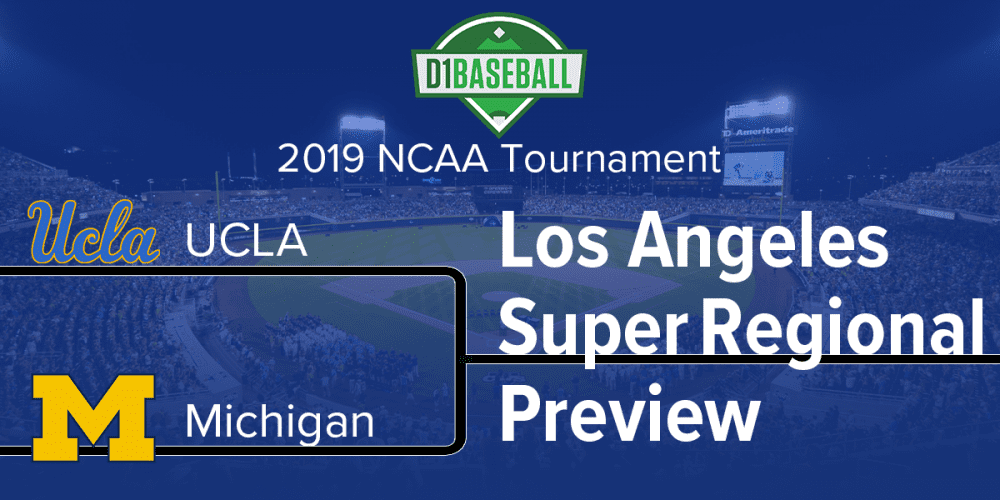 How Michigan Got Here
Schedule and Results | Team Stats and Leaders

The Wolverines didn’t finish the regular season on an incredibly high note, but they put together a solid campaign and earned an at-large bid to the NCAA tournament. There, the Wolverines won their first two games at the Corvallis Regional before losing to Creighton and beating the Bluejays the second time the two teams met on Monday night.

How UCLA Got Here

There’s no question the Bruins were the most consistent team in college baseball this season. Not only did the Bruins never lose a midweek game, they never lost a series, and they hope that trend continues this weekend against the Wolverines. UCLA won its first game at the Los Angeles Regional before losing to LMU in its second game. However, UCLA beat Baylor and knocked off the Lions in two straight games to advance to the NCAA Super Regional round.

The Bruins have one of the best in the business spearheading their rotation in righthander Ryan Garcia. Garcia has put together consistent and impressive starts this season and has a 1.36 ERA in 80-plus innings of work. Garcia will sit anywhere from 88-91 mph with his fastball in the first or second innings, and usually gets the velocity cranking as his starts progress. Garcia will comfortably sit in the 90-92 mph range and will get up to 93-94 mph with his fastball. Garcia also has a sharp 81-84 mph slider with big, late tilt, while righthander Jack Ralston is a funky, older righty who has gone from an afterthought to one of the nation’s premier starters. He had just 18 strikeouts and an ERA north of six last season, but this year? He has over 100 strikeouts and a stellar ERA. The Bruins have a couple of solid options for the final starting role this weekend, and the options include a pair of talented freshmen. Nick Nastrini returned from an injury last weekend and was terrific, striking out seven and allowing just a run in five innings, while fellow righty Jesse Bergin has punch out stuff with a fastball in the low-90s, but is definitely more susceptible to giving up hits and runs than others in the rotation. This UCLA rotation has done a marvelous job considering it lost another key cog, Zach Pettway, for the season due to injury.

John Savage does a great job of mixing and matching his pitching staff, and he’s not afraid to rely on a select few in the bullpen. This season is no exception. Holden Powell has been a rock at the back-end of games and has a fastball sitting anywhere from 90-94 mph with quality stuff. Powell has 17 saves in 39 appearances and, though, he will walk some guys from time to time, he has 60 strikeouts in 44 innings. Jack Filby has logged 23 appearances, and while he doesn’t have blow-away stuff, as usual with a UCLA pitcher, he commands the zone well and knows who he is. Nathan Hadley (38 appearances) and Kyle Mora (46 appearances) have been rocks for the Bruins as well with very good pitchability. As is discussed below in the section from coaches, the bullpen plays up a little bit when righthander Jack Ralston starts games. Ralston has some serious frunk his windup, delivery and approach, and it’s a different look that makes these guys play up when they enter any game he pitches. Overall, Savage manages his pitching staff at an elite level and this bullpen is one to be reckoned with.

I really like both of these teams from an offensive standpoint. Michigan has some versatility throughout its lineup with Jordan Nwogu and Jordan Brewer providing both athleticism and big-time pop. The duo has combined for 24 home runs this season, while veteran Jimmy Kerr has impressive pop and catcher Joe Donovan also can leave the yard. Michigan also can make things happen on the base paths with four players with double digit steals. With that said, it’s hard to go against the Bruins here. UCLA has a sizable advantage in some key categories, and this lineup has stepped up in big situations this season, including last weekend at the Los Angeles Regional. Michael Toglia has premium power and an outstanding approach, and has 16 home runs on the season, while Jake Pries has big pop at the plate and can be a dangerous slugger. One of the big keys for this offense is the rise of speedy Garrett Mitchell. Mitchell struggled offensively last season but made serious advancements in the offseason. He’s now hitting .355 with six homers, 41 RBIs and 18 stolen bases. Chase Strumpf has good power and finds ways to get on base, while Jack Stronach (.330) is as consistent as it gets. Also keep an eye on catcher Noah Cardenas, who’s had a surprising campaign with a batting average north of .400.

Having watched Michigan in the fall and at times this spring, this is a very solid defensive club. Ako Thomas is as good as it gets, there’s speed and athleticism in the outfield with Jesse Franklin, Jordan Brewer and Christian Bullock as the trio, and the left side of the infield does a great job with Blake Nelson and Jack Blomgren leading the charge. Michigan ranks 58th nationally in percentage. Unfortunately, UM is facing arguably the nation’s premier defensive club in UCLA, which ranks fourth nationally with a ridiculously impressive .982 team fielding percentage. Matt McClain does a nice job at the hot corner, while the key to this Bruins team is the middle combo in Ryan Kreidler and Chase Strumpf. Strumpf is as steady as it gets and doesn’t make mistakes, while Kreidler makes both the easy and difficult plays. He made one play in particular at the Los Angeles Regional that was elite. Noah Cardenas is a high-quality backstop, while the outfield has plenty of athleticism and speed with flying Garrett Mitchell leading the way, along with steady Jack Stronach and athletic Jeremy Ydens. UCLA is very sound defensively and will not beat itself.

The Bruins were pushed to the brink last weekend at the Los Angeles Regional, losing the second game to LMU before storming through Baylor and LMU twice to advance to the Super Regional round. UCLA has experience in the weekend rotation with Ralston and Garcia leading the charge, while Powell is a key veteran piece at the back-end of the bullpen. UCLA’s offensive lineup also is loaded with experienced sluggers, while John Savage is the perfect coach to have in a high-stress, leverage situation like a Super Regional series. UCLA is at home and the intangibles certainly favor it entering the series.