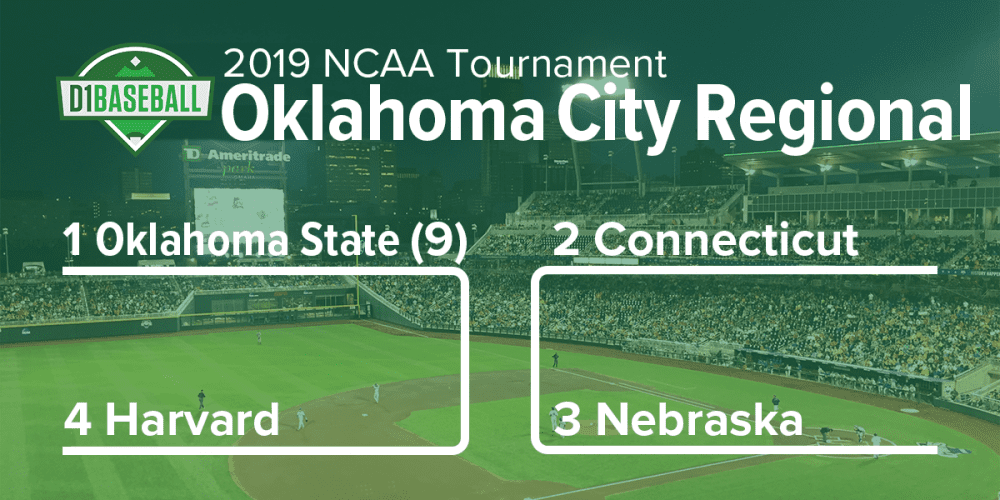 Oklahoma State is playing in its seventh regional in seven years under coach Josh Holliday, and the Cowboys enter the postseason riding a wave of momentum. But Connecticut, Nebraska and Harvard are all capable of making some noise this weekend in Bricktown.

If he’s not pitching the Crimson to a win on the mound one day, he’s winning a game at the plate the next. In the Ivy League playoff game one vs. Columbia, amongst a throng of MLB scouts, Bigge threw a complete game five-hitter and also hit a home run to lead the Crimson to a big win.

In a regional that is light on heavy hitters with gaudy averages, the lanky big-swinger for the Crimson stands out for his .399 average and 12 home runs. McColl has the fourth-best batting average in the field of 64 and is 15th nationally overall. He has remarkably quick hands from the left side and uses his leverage to his advantage.

After being dinged up with injuries the last few years, Prato stayed in one piece this season and it showed in his stellar glove work. He committed just seven errors all season and is expected to be a top-five-rounds draft pick next week. Prato also hit .300-plus for the second straight year and stole 14 bases.

After not giving up a single run last summer in the prestigious Cape Cod League, the Huskies closer carried that momentum into the 2019 season, collecting 15 saves (4th-most in the nation) and holding opponents to a minuscule .156 batting average. In his 28 appearances he also has gone 3-1 with a 0.73 ERA.

X-Factor: Whoever finds their bats

This is an odd field of four in that none of these batting orders are going to scare the bejesus out of any pitching staff. Oklahoma State, UConn, Nebraska and Harvard come into this weekend with .272, .267, .256 and .285 batting averages respectively, good for 118th, 156th, 210th and 62nd nationally in that category. If hitting is contagious, whoever gets the bats going the best first will have a huge leg up on the weekend.

While OSU and UConn might have better overall pitching staffs, the Cornhuskers are the only ones with a pair of weekend starting arms that have a sub 3.50 ERAs in Matt Waldron (6-4, 3.11) and Nate Fisher (7-3, 2.88). On the downside, senior Reese Eddins (6-3, 5.18) has had a star-crossed career and has been hit around pretty well in his last three starts, giving up 15 earned runs in 12 innings.

Beyond Jacob Wallace and his 15 saves mentioned above, the Huskies can also rely on long relievers CJ Dandeneau (4-1, 2.54) and Caleb Wurster (4-1, 2.72), who have held opposing hitters to .228 and .174 averages respectively. Those three relievers have combined for 122.2 innings of work this season.

Sure, the Cowboys strike out a lot, and don’t have a gaudy team batting average (.272) — but they’re still the highest-scoring team in this regional (6.6 runs per game), thanks in large part to their power. OSU ranks sixth in the nation with 84 home runs and 18th with a .473 slugging percentage. It’s a feast-or-famine offense, but it works for the Pokes.

How about this for some equality… three of the teams in this field are defending at a .968 fielding percentage and the fourth is at .967. Yep, Nebraska, Connecticut and Oklahoma State are all dead even with a defense of .968. If you want to give any edge to anyone at all, let’s give it to the Cornhuskers, who have committed the fewest errors of the three at 62 on the season. OSU has committed 66 and UConn has committed 68. But all of them are below-average.

Oklahoma State finished the season on fire, winning 11 of its last 13 games en route to the Big 12 tournament title, and the Cowboys are sure to draw huge crowds in Oklahoma City this weekend. But all four teams in this regional are capable of making serious noise.